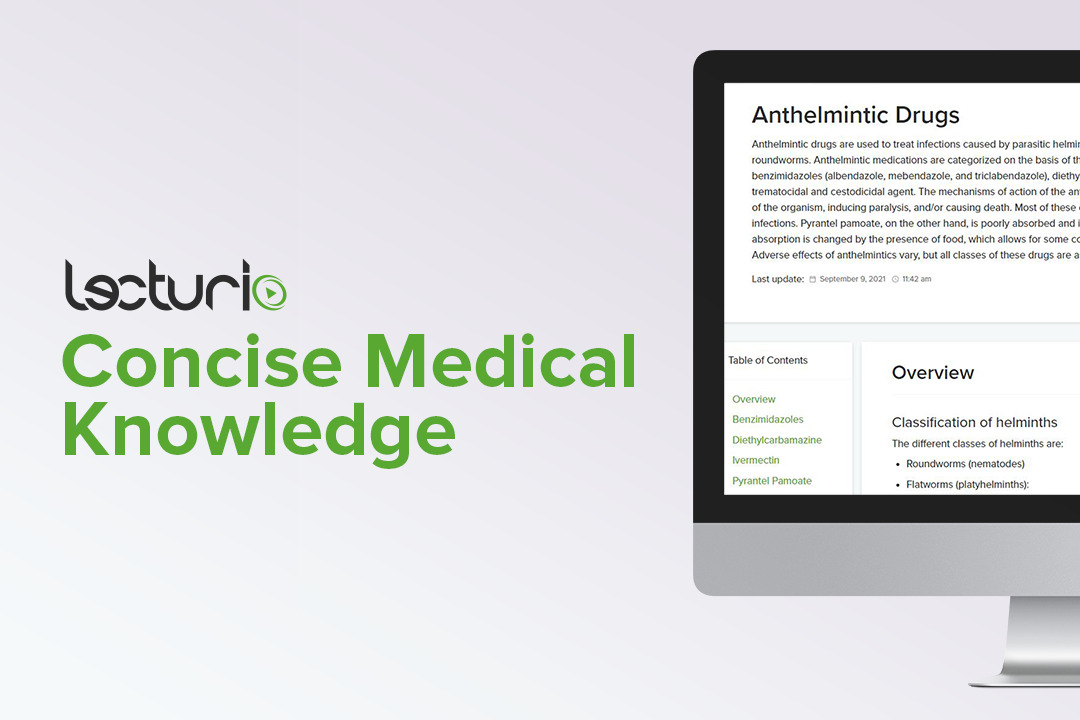 Anthelmintic Drugs
Anthelmintic drugs are used to treat infections caused by parasitic helminths. Helminths include both flatworms (flukes and tapeworms) and roundworms. Anthelmintic medications are categorized on the basis of the class of helminths they are used for. Nematicidal agents include the benzimidazoles (albendazole, mebendazole, and triclabendazole), diethylcarbamazine, ivermectin, and pyrantel pamoate. Praziquantel is a trematocidal and cestodicidal agent. The mechanisms of action of the anthelmintic drugs vary, but many work by disrupting the normal function of the organism, inducing paralysis, and/or causing death. Most of these drugs are well absorbed, which can allow for treatment of systemic infections. Pyrantel pamoate, on the other hand, is poorly absorbed and is better suited to treating luminal nematodes. The benzimidazoles’ absorption is changed by the presence of food, which allows for some control in treating luminal or invasive infections (such as cysticercosis). Adverse effects of anthelmintics vary, but all classes of these drugs are associated with GI side effects.
read more
Load more
Share
Ask Questions
Take Notes
Download Slides
Report Mistake
Comments
show all Show less
My Notes
show all Show less
Learning Material 2
show all Show less
Report mistake
Transcript
0 of 0

00:00 So let's move on to the antihelminthic agents. 00:04 We'll start of with the nematodes. 00:06 So the nematicidal agents start off with albendazole. 00:11 It's probably first in alphabet but it's also first in choices. 00:15 It's a very, very good agent. 00:17 It inhibits microtubule assembly which is essential for the structural stability of the organism. 00:24 It kills the ova or eggs in ascariasis and these other agents. 00:30 It is also going to kill the larva in ascariasis and cysticercosis which is also called the pork tapeworm. 00:39 It is larvicidal in hookworm. 00:41 And it is also larvicidal in hydatid disease. 00:44 So we use this agent in a number of different types of infections that are listed there. 00:51 In terms of toxicity from this agent, because the agent is used for such a short duration or time, toxicity is really quite rare. 01:00 Sometimes we'll see a reversible drop in white cell count. 01:03 And sometimes we'll see a short time rise in liver enzymes with prolonged used. 01:08 But the times that we actually use this for prolonged usages is really quite rare. 01:13 So becomes mostly a non issue. 01:18 Diethylcarbamazine is quite an interesting drug. 01:23 We actually use it to immobilize the microfilariae by an unknown mechanism. 01:30 And it is used in eye worm. 01:31 So this is actually an image of an eye worm. 01:34 So you can actually see them in the square, in the iris of a patient. 01:41 It looks like a white line that actually moves around. 01:43 It's actually quite a horrific thing to see if you've ever seen it live. 01:48 Toxicity to this medication, reactions to proteins of dying filariae include fever, rash and ocular damage. 01:55 So it's not so much the drug itself that's causing the toxic reaction. 02:00 It's a fact that when these filariae are dying, those break down proteins are causing all kinds of reaction. 02:07 And that's where you get run into trouble. 02:11 Ivermectin is another well known agent. 02:15 It's a nematicidal. 02:17 This is cutaneous larva migrans and you will see this in your practice at some point or another. 02:23 These are worms that are actually under the skin. 02:25 It's one dose, so ivermectin is one dose. 02:29 It intensifies the GABA neurotransmission in the nematodes. 02:33 And the nematodes become spastic and immobilize. 02:36 And they can't feed. 02:38 They can't do anything and they die. 02:39 We use it in cutaneous larva migrans, strongylodiasis and filariasis. 02:49 Toxicity to ivermectin is quite rare. 02:52 Remember that the actual toxicity to the drug is almost non-existent because it's just a single dose. 02:58 Where you get the toxicity is from the dying worms. 03:01 And so the agents that are being released from the dying worms includes fever. 03:06 The side effects include fever, rash and ocular damage if it's in the eye. 03:11 Now this disgusting picture is an infection of ascariasis. 03:19 This was removed from a 4 year old child who ended up having a bowel obstruction. 03:23 And they couldn't figure out why. 03:25 And the found out that his valve was full of these worms. 03:27 So mebendazole is the treatment for this. 03:31 It's absorbed minimally. 03:34 So less than 10 percent of this agent can be absorbed from the bowel. 03:37 It inhibits microtubule synthesis. 03:40 And it also inhibits the glucose uptake in the nematodes so they die very quickly. 03:45 It is the primary drug for ascariasis, pinworm and whipworm. 03:49 And it is the backup drug for visceral or tissue larva migrans. 03:58 Thiabendazole is another nematicidal agent. 04:00 It's a structural cogener of mebendazole. 04:03 In terms of how it is working, it's absorb systemically and it has much more systemic side effects then the other agents. 04:13 It works through inhibiting microtubule synthesis and glucose uptake in nematodes. 04:18 It's an alternative for systemic infections things like strongyloides or trichinosis which are the adult worms. 04:25 In terms of toxicity GI irritation is quite common. 04:28 You can also get intrahepatic cholestasis, liver failure. 04:33 And in terms of neurological symptoms you can sometimes get headache, dizziness and drowsiness. 04:38 A drop in white count leukopenia is common. 04:42 Hematuria is something that we have to be aware of and can occur. 04:46 And allergic reactions not just to the dying organisms but also to the drug itself are also present. 04:52 You can also get a Stevens Johnson syndrome which can be fatal. 04:57 We're not entirely sure if this is due to the drug itself or if it's due to the dying organisms, we haven't quite figured that one out yet. 05:05 And any rate be quite aware that this is a potential problem with this agent.

The lecture Nematicides – Anthelmintic Drugs by Pravin Shukle, MD is from the course Antimicrobial Pharmacology.

A young boy is brought by his parents to your office complaining of abdominal pain and swelling. The family lives on a farm. On barium X-ray, you see a large intraluminal mass of worm-like organisms obstructing the ileum. Which drug will be the best option of treatment for this patient?

Which drug is given in a single-dose regimen to treat cutaneous larva migrans?

A patient comes to you and complains of a sensation of something moving in their eye. On examination, you notice a worm in the subconjunctival tissue. Which drug will you prescribe him?