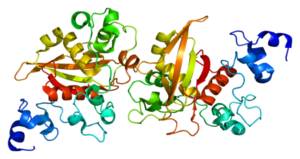 00:01 Methionine metabolism is kind of complicated as we study it coming from aspartic acid. 00:07 The breakdown of methionine actually overlaps with cysteine metabolism as we briefly seen. 00:12 The complicated synthesis that comes from aspartate, however, I'll show here with a set of arrows. 00:17 Now, the other set of lectures where I've talked about vitamin B12 metabolism, I actually showed those seven reactions. 00:24 So I'm not going to show them again here. 00:25 But suffice it to say that there are seven chemical steps that occur: phosphorylation, an oxidation that accompanies dephosphorylation, another oxidation that occurs, this process creates homoserine. 00:39 Homoserine we remember was an intermediate in the synthesis of the cysteine from methionine. 00:47 Succinylation involves the addition of a succinate molecule. 00:50 The cysteine is replacing the succinate in the next step of the process. 00:55 There's then loss of a pyruvate and an ammonion ion to produce the homocysteine and homocysteine was the molecule we remember whose concentration is a problem in the production of cysteine. 01:07 And finally, methylation of the homocysteine by an N5-methylfolate creates methionine. 01:13 This was the reaction that I described in the other lecture that requires vitamin B12. 01:20 There are other ways of making methionine. 01:22 Homocysteine, as we've seen, can be converted to methionine by the alternate pathway that I'm going to show you here. 01:29 Now, this pathway is another way of getting a methyl group on to homocysteine. 01:34 The difference between homocysteine and methionine is that methyl group. 01:39 So glycine betaine is the source of methyl group here. 01:43 It combines with homocysteine to make dimethylcysteine and methionine. 01:48 So we can see that a methyl group has transferred from the glycine betaine on to the homocysteine to make methionine. 01:55 The enzyme catalyzing this reaction is betaine, homocysteine, methyltransferase. 02:00 And the reaction here occurs in the liver. 02:03 We see the transfer of the methyl group as occurs right here. 02:08 Now, methionine is modified in bacteria before it is put in to making proteins. 02:14 We remember in bacterial translation that the very first amino acid that makes it into the proteins is not methionine but a modified form of it, and that's known as formylmethionine. 02:25 So this set of reactions I'm going to show you shows how that formylmethionine is made. 02:31 Like the synthesis of selenocysteine, formylmethionine is made by modifying a methionine tha's on a transfer RNA. 02:40 This is shown in the set of reactions. 02:42 Methionine combines first with its initiation tRNA that's used to put it into the protein during the process of translation. 02:49 This produces the methionine joint to the tRNA. 02:54 And then the reaction that makes formlymethionine, we see that the formyl group actually comes form 10 formyltetrahydrofolate and produces the formulated methionine on the transfer RNA. 03:08 The product to that reaction makes tetrahydrofolate. 03:11 And the enzyme catalyzing in this Methionyl-tRNA formyltransferase. 03:16 The next amino acid metabolism we will consider as that of threonine. 03:20 Threonine's metabolism overlaps a bit with methionine metabolism. 03:24 The first three steps of the synthesis of threonine from aspartate are the same as first three steps in the synthesis of methionine. 03:31 The aspartate is converted to aspartyl-beta-phosphate by a phosphorylation. 03:36 The aspartyl-beta-phosphate is converted to beta-aspartate semialdehyde by a reduction. 03:42 And the homoserine is created from the last intermediate by a reduction as well. 03:47 These three steps also happen in the synthesis of methionine. 03:51 In the next step of the process, homoserine is phosphorylated to make phosphohomoserine using energy from ATP. 03:58 And then phosphohomoserine is dephosphorylated and that dephosphorylation involves a molecular rearrangement, that molecular rearrangement producing threonine. 04:07 This whole process involves the use of 2 ATP and 2 NADPH molecules. Lysine is made in also another set of very complicated reactions. 04:18 The first two reactions are same as threonine and methionine metabolism. 04:22 There are total of nine steps. 04:24 I'm not going to step you through all of those here because they're not really relevant or needed for us to understand what's happening in the process. 04:30 Lysine is one of the most post-translationally modified amino acids and we'll talk about that at the end of this set of lectures. 04:38 It's very important for that the modifications that happen to lysine allow for so many things to happen in the cells. 04:44 The hydroxylation of lysine, we've seen in another lecture, is important for making strong collagen. 04:51 And a deficiency of one of the enzymes in the lysine pathway, an alpha-aminoadipic semialdehyde synthase, leads to hyperlysinemia. 04:59 And hyperlysinemia leads to accumulation of lysine in the blood which has some very severe consequences.

The lecture Methionine, Threonine and Lysine Metabolism by Kevin Ahern, PhD is from the course Amino Acid Metabolism. It contains the following chapters:

During the synthesis of methionine...?

Which of the following statements is true of Formyl-methionine?

Which of the following is true regarding the synthesis of threonine?

Which of the following is true regarding lysine?