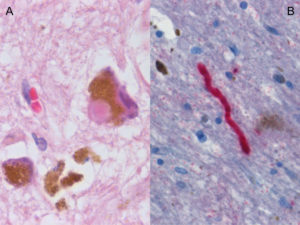 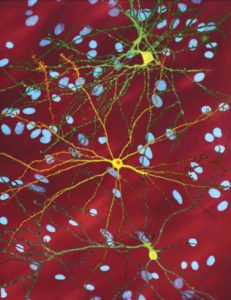 Huntington’s Disease (HD, Huntington's Chorea) — Genetics and Progression
The clinical picture of Huntington’s disease belongs to the category of movement disorders or extrapyramidal disorders and has autosomal dominant inheritance. The disease is characterized by a progressing hyperkinetic syndrome, where an increase in motions or an akathisia occurs. The complete medical picture is characterized by a combined indication of choreatic hyperkinesia, dementia as well as weight loss (anorexia), which is caused by an increased basal metabolic rate.
read more
Load more
Share
Ask Questions
Take Notes
Download Slides
Report Mistake
Comments
show all Show less
My Notes
show all Show less
Learning Material 2
show all Show less
Report mistake
Transcript
0 of 0

00:01 We're going to talk now about drugs used to treat other movement disorders or what we call non Parkinsonian movement disorders. We're going to start off first with tremor. 00:11 Now, you're going to cover tremor in much more detail in your neurology lectures, I'm only going to talk about the medications. 00:19 Propranolol is a beta blocker. Other beta blockers can be used as well. 00:24 Propranolol is a very effective agent in postural tremor. It seems to respond well to beta blockade, we're not exactly sure why that happens. Gabapentine, primidone and topiramate are also anti-epileptic drugs that may also work in postural tremor. 00:43 Huntington's disease is a complex carrier form type of movement. It's inherited. It's passed on. 00:49 It affects the GABA function. So, by giving medications to affect GABA function, we can reduce Huntington's disease. 00:59 So, drugs like reserpine and tetrabenazine deplets the levels of amines. 01:04 We really are not sure how it works entirely, which is why my lectures are a little bit sparse in terms of mechanism of action. 01:13 We think that it corrects brain neurotransmitter imbalances. We are not sure though. 01:19 Gabapentin, primidone and topiramate are anti-epileptic drugs that may also work in this disease. 01:27 Haloperidol, also known as haldol, is a dopamine receptor antagonist, and for some reason it works although we're not really sure what the mechanism is. 01:39 Tourette's syndrome is a harder one to treat. We look at D2 receptor antagonism. 01:47 So, haloperidol and pimodize are D2 receptor antagonists and carbamezapine is an anti-seizure medication. 01:55 It has been described as being less useful but it is something that we can try. 02:01 And on one of my patients, it has actually worked quite well where haloperidol didn't work at all. 02:06 Once again, we're not sure how it works. Other agents that we have used are benzodiazepine. They tend to be less useful. 02:15 And clonidine which is the very first treatment we used in Tourette's syndrome. It's an alpha blocker that works centrally in the brain. It is less useful as well. 02:26 Wilson's disease. Now, Wilson's disease is generally thought that it was liver disease. 02:33 The classical finding in Wilson's disease is a Kayser-Fleischer ring that's seen in the eye on eye exams. 02:41 You can see a little bit of a brown haze on the edges of the iris. This is a disorder of copper metabolism. 02:49 Why am I talking about it here? Because it does result in neurological damage. 02:55 Myasthenia can occur. And mild movement disorders that are very nonspecific can occur in Wilson's disease. 03:02 This is why, just as a clinical pearl, always do a good eye exam in your patients and take a close look at their iris cause you may actually pick up Wilson's disease. I've done it a couple of times in my own patients. 03:15 The treatment is penicillamine. Now, penicillamine chelates copper out of the blood. 03:20 So, if you can give them penicillamine early enough, you can actually treat the movement disorder associated with Wilson's disease. 03:32 Restless leg syndrome is a particular problem we don't really know why it occurs and we think that it might be dopamine related pathways. Pramipexole is probably the most commonly used treatment of restless leg syndrome We also have used carbamezepine or Tegretol for treatment of it. 03:54 Drug induced dyskinesias, I've mentioned them before in the psychosis lecture, benztropine is the antidote. 04:02 Acute dystonia is often caused by antipsychotics. We administer benztropine as quickly as possible. 04:10 Tardive dyskinesia is another type of drug induced dyskinesia. It may be due to a D2 receptor malfunction or damage to the D2 recptor, we're not sure. We know of course that fetal alcohol syndrome may develop tardive dyskinesia just after one dose of the antipsychotic agent. I mentioned this already in the psychosis lecture previously. 04:35 It's hard to treat. No specific treatment. And once again, we can use clonazepam, clozapine and other drugs. 04:46 So there you have it. These are the non Parkinsonian movement disorders. I'm sure you'll do very well on your exams.

The lecture Medications for Non-Parkinsonian Movement Disorders by Pravin Shukle, MD is from the course CNS - Pharmacology. It contains the following chapters:

A 24-year-old female presents to your clinic with occasional and sporadic movements of her upper and lower extremities. She reports these symptoms started recently and have been progressively getting worse. She vaguely remembers her father had a similar condition, but he died when she was very young. Which of the following conditions is most likely?

A 17-year-old female presents to your clinic because of abnormal uncontrolled movements over the past few months in her limbs. She has no history of a serious illness. On physical examination, her liver is slightly enlarged. Blood results reveal elevated liver enzymes. Which of the following findings is associated with the most likely diagnosis in this patient?

Pharmacotherpay for Tourette's Syndrome includes dopamine antagonism. Which of the following drugs is the most appropriate in this regard?