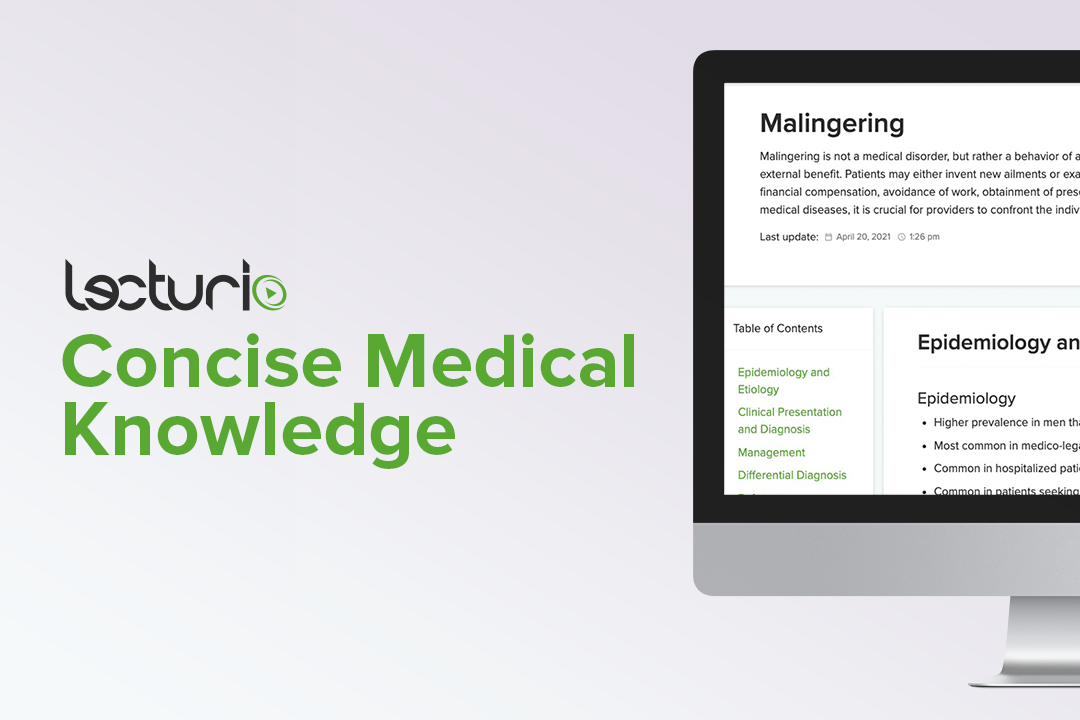 Malingering
Malingering is not a medical disorder, but a behavior of an individual. Malingering is characterized by the intentional falsification of symptoms for an external benefit. Patients may either invent new ailments or exaggerate current symptoms. Common examples of secondary gain include financial compensation, avoidance of work, obtainment of prescription medications, and avoidance of criminal charges. After ruling out organic medical diseases, providers must confront the individual in a nonjudgmental fashion.
read more
Load more
Share
Ask Questions
Take Notes
Download Slides
Report Mistake
Comments
show all Show less
My Notes
show all Show less
Learning Material 2
show all Show less
Report mistake
Transcript
0 of 0

00:00 Now let’s talk about Malingering and we’ll start with a case example of this “50-year-old man who comes to the hospital complaining of hearing command auditory hallucinations and they told him to hurt himself.” So, you do your evaluation and you find that this man though is unwilling to cooperate in any action plan other than being admitted to the hospital for observation. 00:24 So you try to brainstorm with him about other alternatives, safety net outside of the hospital, you asked about connecting to outpatient providers and he’s really uncooperative with you in the emergency room but he tells you that he wants to be admitted, he also tells you that he’d like medication and the only medication that has ever helped him with these hallucinations are benzodiazepines. He absolutely refuses to consider any anti-psychotic medication. So, on your review of his previous hospital records, you see that this man has a pending application for disability and in fact he’s come to the hospital multiple times seeking admission, looking to hope his disability application. So, he further is refusing to participate with you and when you asked to speak to collateral sources of information he says “No.” His answers to you are vague and inconsistent, although he does intersperse a lot of technical medical jargon into his conversation. 01:26 So he uses phrases like "command hallucinations" and also "needing PRNs," terminology that's usually used by nurses and doctors, not usually by lay people or patients. So, what is malingering? You’re probably suspecting this from the case example and malingering is actually the faking or exaggerating of symptoms for obvious external benefit. Some common reasons are disability, evading prosecution or criminal charges, looking for money, housing, or to get medication especially controlled substances. So, malingering involves the feigning of physical or psychological symptoms. You’re really looking for personal gain and it’s very common when people have external motives to malinger symptoms to try to get what they want and it’s pretty common in hospitalized patients, more often occurring in men than women and some of the criteria that you’re going to look for to diagnose it are as follows. The presentation is usually with multiple vague complaints that do not conform to a known medical condition. The patient often has a long history of many hospital stays. Generally, they’re uncooperative and they refused to accept a good prognosis or even refused to talk with you about a management plan that could help them. The symptoms also tend to improve once the desired objective is obtained. So, with this gentleman, you might be suspecting malingering. That summarizes some of the somatoform disorders and other disorders that fall under that category. You know a little bit now about the diagnosis and how to go about management and treatment of these patients.

The lecture Malingering by Helen Farrell, MD is from the course Dissociative Disorders.

Which of the following is NOT seen in patients presenting malingering?

All of the following are common external motives for malingering, EXCEPT:

I really have no words to say how useful these lectures are and how well these have been presented.

I really have no words to say how useful these lectures are and how well these have been presented.