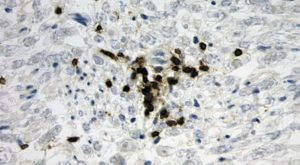 00:01 The MHC is the major histocompatibility complex. 00:08 It’s called that because it’s a complex of genes, it’s not a single gene. 00:13 And it’s a complex of genes that are the major determinants of tissue compatibility during transplantation. 00:21 That’s how it was first discovered. 00:23 When people were exploring, doing skin grafts for example in mice, between different strains of mice, they recognized that the skin graft from a different strain of mouse would be rejected, immunologically rejected due to recognition of these MHC molecules. 00:40 Well of course, MHC did not evolve to frustrate attempts at transplantation. 00:46 It’s a consequence of the diversity of the MHC but it’s not why we have an MHC. 00:51 We have MHC to show protein antigens in the form of peptides to T-cells. 00:58 In each individual species, the MHC is given a particular name. 01:02 You only need to really know about two of them. 01:05 In the human, it’s called HLA. 01:08 And in the mouse, it’s called H-2. 01:11 It’s worth knowing that because a lot of immunology is worked out in the mouse. 01:15 So when you’re reading textbooks and so forth, you may often come across H-2. 01:19 It’s simply the MHC of the mouse, just like HLA is the MHC of the human. 01:28 There are two classes of MHC - MHC Class I and MHC Class II. 01:36 And they are very similar in structure and very similar in what they do as we’ll learn very shortly. 01:43 There are three types of MHC Class I in the human: HLA-A, HLA-B and HLA-C. 01:52 And for Class II we have HLA-DP, HLA-DQ and HLA-DR. 02:00 The MHC Class I molecules are present on all nucleated cells in the body. 02:05 That’s essentially all cells in the body apart from red blood cells. 02:11 However, the MHC Class II is only present on a very limited number of cell types. 02:17 Essentially professional antigen presenting cells, which are the dendritic cells, the macrophages and the B-cells, and on thymic epithelium. 02:27 And in fact, these professional antigen presenting cells are defined as such by having MHC Class II on their surface. Now I’ve already mentioned that Class I is present on all nucleated cells in the body. And of course dendritic cells, macrophages, B-cells, thymic epithelium, they’re nucleated cells as well. So these cells have both MHC Class I and MHC Class II. 02:50 So it’s not an alternative, it’s an addition to the Class I. 02:54 The function of MHC Class I is to alert CD8+ cytotoxic T-cells to the presence of intracellular antigens; for example, a virus infecting a cell. 03:10 Whereas MHC Class II is specialized to alert CD4+ helper T-cells and CD4+ regulatory T-cells to the presence of extracellular antigens such as bacteria. 03:24 Let’s explore the MHC gene locus. 03:28 We’ve already heard that there are two classes of MHC - MHC Class I and Class II. 03:34 In the humans, these genes are present on chromosome 6. 03:40 HLA Class I consists of HLA-A, -B and -C as we’ve heard. 03:47 And they’re actually arranged in this order. 03:49 You may think that there’s misordering here, looks a bit odd doesn’t it, it’s not ABC, it’s BCA. 03:56 And that’s simply the order that these genes are present on the chromosome. 04:01 And the Class II genes for DQ, DQ, DR. 04:07 In fact there’s another region within the MHC that’s called MHC Class III. 04:12 These genes do not actually encode antigen presenting molecules. 04:16 So they’re really nothing much to do with what we’re talking about at the moment. 04:20 But actually they do encode molecules that are part of the immune response. 04:25 So complement component C4, complement component Factor B that’s part of the alternative pathway of complement activation, complement component C2, lymphotoxin which is a cytokine and another cytokine, TNF-α, are all encoded within the MHC Class III region. But we’re going to focus our attention now on the MHC Class I and Class II antigen presenting molecules.

The lecture Major Histocompatibility Complex (MHC) – Antigen Processing and Presentation by Peter Delves, PhD is from the course Adaptive Immune System. It contains the following chapters:

What is an example of an MHC class II molecule?

Which of the following comparisons between MHC Class I and MHC Class II is CORRECT?

Major histocompatibility complex (MHC) class III gene encodes for all EXCEPT which of the following?

(1) 3,0 of 5 stars
Too late
By Chad-Solomon D. on 06. October 2020 for Major Histocompatibility Complex (MHC) – Antigen Processing and Presentation

While the lecture itself is very informative the fact that MHC is referred to many times before this point means that it needs to be much earlier in the playlist.

(1) 3,0 of 5 stars
Too late
By Chad-Solomon D. on 06. October 2020 for Major Histocompatibility Complex (MHC) – Antigen Processing and Presentation

While the lecture itself is very informative the fact that MHC is referred to many times before this point means that it needs to be much earlier in the playlist.