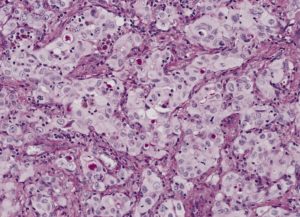 00:00 So staging of lung cancer is a little complex. This is a simplified table and there are three components to this. The first is the tumour size and simply enough the bigger the tumour the higher the stage and the higher stage is the ones which are less treatable. So for example tumours that is less than 3cm diameter is stage 1 on the tumour size staging, the T-staging, if it's 3-7 cm it is stage 2 T2. If it is above 7cms it's T3. However any of these tumours which are invading sites which you cannot resects such as the trachea large blood vessels of the spine and medially the tumour becomes stage T4. Nodal involvement is described either as none as in N-0, ipsilateral hilar nodes N1, ipsilateral mediastinal nodes N2, contralateral or extrathoracic nodes which means cervical lymph nodes, lymph nodes down in the gut, axillary lymph nodes and if they are involved it's an N3 disease. Metastases is very simple. Either the patient has an extra pulmonary metastases or it doesn’t. So M0- no metastases, M1- any metastases anywhere and it doesn't matter what size it is. It could be half a centimeter in the liver if that was metastases then that patient has M1 disease. This staging process is simplified a little to this and the reason for this simplification is that essentially, surgery is offered to patients with stages 1 & 2 but to not stage 3 or 4. So if somebody is presenting with mediastinal lymph nodes on the other side then they are not surgically operable. Anybody presenting with metastases is not operable. Ipsilateral mediastinal nodes it’s difficult. 01:58 They can be operated on some times but in general that probably means that’s not going to be operated on. Ipsilateral hilar nodes or just the mass in the lung can be operated on.

The lecture Lung Cancer Staging (TNM) by Jeremy Brown, PhD is from the course Lung Cancer.

Which of the following is NOT usually associated with small cell lung cancer?

Which of the following statements is FALSE?

Which of the following is the highest stage of lung cancer?

Which of the following statements regarding the staging of lung cancer is FALSE?