Layers, Borders and Spaces of the Pharynx 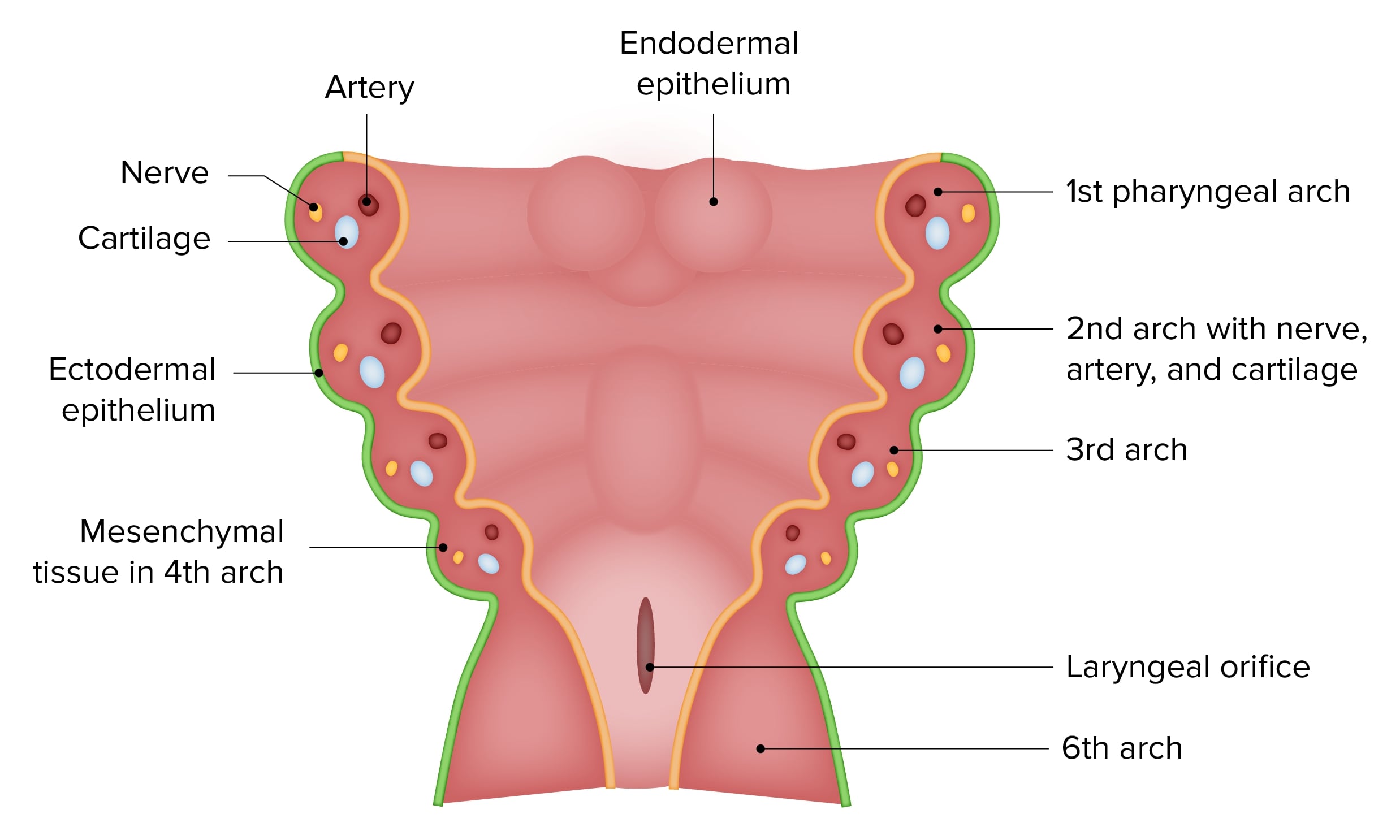 00:01 Welcome to today's lecture on the pharynx. 00:04 The pharynx is a fibrous muscular tube, which forms the upper part of the air and food passages, sometimes also referred to as the aero-digestive tract. 00:14 The pharynx has an intricate anatomy, and its structures are subject to several important pathological processes. 00:21 Making true understanding of today's topic especially critical for all future physicians. 00:28 So let's dive into the gross anatomy in the pharynx. 00:31 And along the way, also look at some important topographic landmarks related to this region. 00:40 As I mentioned already, the pharynx is a fibromuscular tube that is located deep to the structures of the nose and mouth and extends for short distance into the neck. 00:50 It is conical in shape with a variable width that ranges from 3 1/2 down to 1.5 centimetres and spans the length of 12 to 14 centimetres from the base of the skull to the lower border of the crate quite cartilage at the level of the six to seventh cervical vertebrae. 01:12 Here it meets the oesophagus to form the pharyngealesophageal junction. 01:18 This is the narrowest part of the digestive tract apart from the vermiform appendix. 01:26 The pharynx as many other structures in the human body is a composite structure rather than a single clinical tube. 01:34 What I mean by this is that instead of being composed of a single tissue, forming a solid continuous structure, like for example, the oesophagus, the pharynx is composed a separate layers which come together to form a single fibromuscular membranous tube. 01:54 Now let's take a look at the word fibromuscular membranous which basically spells out for us the different layers that contribute to the formation of the pharynx. 02:05 The first and innermost layer the pharynx is the mucous membrane. 02:10 This membrane is continuous with the mucous membranes of the nose, Eustachian tube, mouth, larynx, and the oesophagus, forming a uniform lining of the upper aero-digestive tract. 02:26 The mucous membrane is composed of stratified squamous epithelium, except in the region of the nasal pharynx where it is lined by respiratory ciliated pseudostratified columnar epithelium that is interspersed with numerous goblet cells. 02:47 The second layer is the pharyngeal aponeurosis also known as the pharyngeal basilar fascia. 02:54 This is a thick membranous sheath that attaches to the basilar part of the occipital bone, the petrous part of the temporal bone, the medial pterygoid plate, the pterygomandibular raphe, and the pharyngeal tubercle of the occipital bone. 03:12 The superior portion of this fascia is most clearly visible as it fills in the gap or sinus of morgagni, which exists between the base of the skull and the upper edge of the superior pharyngeal constrictor muscle. 03:28 The remainder of the fascia, thins out in fairly, and is more difficult to distinguish. 03:35 However, it serves as an internal epithelial codeine for the pharyngeal musculature, and externally it forms a median pharyngeal ligament, or raphe, to which all the external muscles of the pharynx insert. 03:52 The third and the thickest layer is the muscular coat. 03:56 We will discuss this layer in more detail in a few slides when we'll talk about the musculature of the pharynx but for now, it'll suffice to mention that this layer has two sub layers. 04:08 The external circular sub layer is composed of the superior, middle and inferior constructor muscles. 04:16 And the internal longitudinal sub layer is composed of the stylopharyngeus, salpingopharyngeus, and palatal pharyngeus muscle. 04:26 And the last, the fourth layer is the buccopharyngeal fascia which covers the outer surface of the pharyngeal musculature. 04:38 One additional topic I'd like to go over before we move on to the musculature of the pharynx is its borders and the spaces around it. 04:48 As we already know, severely the pharynx is limited by the sphenoid bone and inferiorly it is continuous with the oesophagus. 04:57 However, posteriorly to the pharynx is located the vertebral column. 05:02 These two structures are separated from each other by the retropharyngeal space, which is lined by the buccopharyngeal fascia anteriorly and the prevertebral fascia, posteriorly. 05:17 And lastly, a lateral to the pharynx is located another space, the parapharyngeal space, which came throated sheath, which then in sheaths, the carotid vessels, the jugular vein, and the last for the cranial nerves as well as the cervical sympathetic chain. 05:34 Additionally, it is also important to remember, that unlike the retropharyngeal space, the parapharyngeal space only extends as far down as the hyoid bone. 05:46 Now there are other potential spaces in relation to the pharynx. 05:50 But these two spaces are most important clinically because they are a route for the spread of infections, and are thus worth remembering.

The lecture Layers, Borders and Spaces of the Pharynx by Craig Canby, PhD is from the course Head and Neck Anatomy.

What is the superior border of the pharynx?

With the exception of the nasopharyngeal region, what is the composition of the mucosal layer of the pharynx?

What is the thickest layer of the pharynx?

Author of lecture Layers, Borders and Spaces of the Pharynx