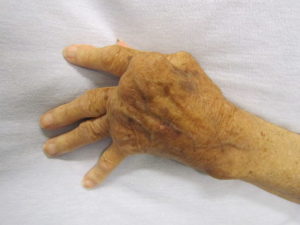 Juvenile Idiopathic Arthritis (JIA) — Treatment and Prognosis
Juvenile idiopathic arthritis is a chronic inflammatory condition that occurs in children and is characterized by the involvement of a single joint (psoriatic type), 1-4 joints (oligoarticular), 5 or more joints (polyarticular), or systemic-onset disease. The exact etiology is unknown, but genetic predisposition is likely to play a significant role in the pathogenesis. The diagnosis is based on clinical criteria which can be supported by laboratory findings. Treatment is dependent on the exact type of the disease and mainly consists of non-steroidal anti-inflammatory drugs, steroids, methotrexate and tumor necrosis factor alpha inhibitor. Biologic disease-modifying antirheumatic drugs have recently been approved for use in juvenile idiopathic arthritis.
read more
Load more
Share
Ask Questions
Take Notes
Download Slides
Report Mistake
Comments
show all Show less
My Notes
show all Show less
Learning Material 2
show all Show less
Report mistake
Transcript
0 of 0

00:01 In this lecture, we will discuss juvenile idiopathic arthritis. Here’s a classic case. An eleven year old child is presenting to you after several rounds of antibiotics with a complaint of long-standing pain and swelling of fingers, wrists, and ankles. What’s the most likely diagnosis? In this case, it’s probably juvenile idiopathic arthritis or JIA for short. JIA causes pain and swelling in the joints. 00:33 It’s an autoimmune disease that primarily affects children and its typical onset is before 16 years of age. 00:43 There are three different major types of JIA and a few smaller, less common types. The major types that are likely to show up in an exam are oligoarticular JIA which usually involves fewer than six joints, polyarticular JIA which is multiple joints, and systemic JIA which may involve a wide variety of systemic symptoms. There are other types of JIA too that are less common. Enthesitis-associated JIA is a variety of JIA that causes enthesitis which is an inflammation of the insertion around the joint. 01:26 Psoriatic JIA is associated with psoriasis of the skin. Undifferentiated JIA may be a variety of different types of JIA that don’t really fit into one category in that particular patient. 01:40 JIA characteristics do usually involve joint inflammation. The synovium is the target for that auto-inflammatory process. It results in the proliferation of synovial tissue and increased joint fluid. 01:57 You may see increased blood flow, swelling, and inflammatory cells if you were to tap that joint. 02:04 The progression of symptoms generally starts off with a persistent synovitis which then results in joint destruction which can cause long-term bone, tendon, ligament problems. So, of the three major types, they tend to present slightly differently. Let’s start with oligoarticular JIA. 02:26 This is about half of cases. Females are more commonly affected than males and it’s really in the two to three year range. It would be very rare for this disease to present after 10 years of age. 02:40 Polyarticular JIA is about a third of cases. Again, females are more affected than males. 02:47 There seems to be two periods of time when it shows up the most, between two and five and between ten and fourteen. Systemic JIA is the minority of cases, only about one in ten and there’s no predominance for either gender. It can happen at any age, really under 17 years of age. 03:08 So, let’s drill down on the three major types of JIA. Oligoarticular JIA is usually less than five or at least less than six joints that are affected. Those joints include medium and large joints. 03:25 The disease tends to be asymmetric in how it attacks the child. It's rarely that it involves the hips and this tends to be a nondestructive arthritis. There are usually no systemic features. 03:39 These children are afebrile and otherwise doing well. But there are two groups. If the child is ANA positive, they are more likely to have a uveitis about 20% of the time. The ANA negative patients are less likely to. Polyarticular JIA usually involves multiple joints. It can involve any joint it wants to but this disease is usually more symmetric. So, our initial case with involvement of the hands, the feet, the ankles would be classic for a polyarticular JIA. It rarely involves the hips as well and this is a destructive arthritis unlike the oligoarticular variety. It less frequently causes uveitis. 04:27 Systemic JIA may have any joints or no joints. If it involves joints, it’s often a destructive arthritis. 04:36 These patients usually come in complaining of high fevers daily. They may have an evanescent, salmon-pink rash and I’ll show you a photo of that in a minute. They may have hepatosplenomegaly, lymphadenopathy, or heart, lung, or liver involvement. These children have a systemic autoimmune process. Here’s an example of how children can be affected. These are two sisters. 05:03 This four-year old sister is substantially affected in terms of her ability to have functioning joints long-term. This is the chronic destruction you see in what is likely in this child, polyarticular JIA. 05:18 It’s symmetric. It’s involving multiple joints. So, when you’re diagnosing a patient, you will want to hear a history of joint pain typically, unless it’s the systemic variety that you’re suspecting. 05:32 Oftentimes, patients will have morning stiffness or stiffness still for after being still for a prolonged period of time. We call this gelling. In other words, if a patient is just sitting there for a while and then gets up, they have that stiffness again. These patients often have limp especially when the lower extremities are involved. About 25% of patients with JIA will have no report of pain and only swelling. 06:01 The massage doesn’t seem to help. Here is that salmon-pink rash, that evanescent rash of systemic onset JIA. I’ll be honest. I have not seen this rash in the patients that I’ve seen with systemic JIA. It’s not always there and it doesn’t always show up in any individual patient.

The lecture Juvenile Idiopathic Arthritis (JIA) by Brian Alverson, MD is from the course Pediatric Rheumatology and Orthopedics. It contains the following chapters:

Which of the following statements is TRUE about systemic juvenile idiopathic arthritis?

Which type of juvenile idiopathic arthritis involves fewer than 6 joints, has a higher prevalence in girls, and has an onset around the age of 2-3 years?

Which of the following is NOT a feature of polyarticular juvenile idiopathic arthritis?

Which of the following is the target organ for inflammation in juvenile idiopathic arthritis?