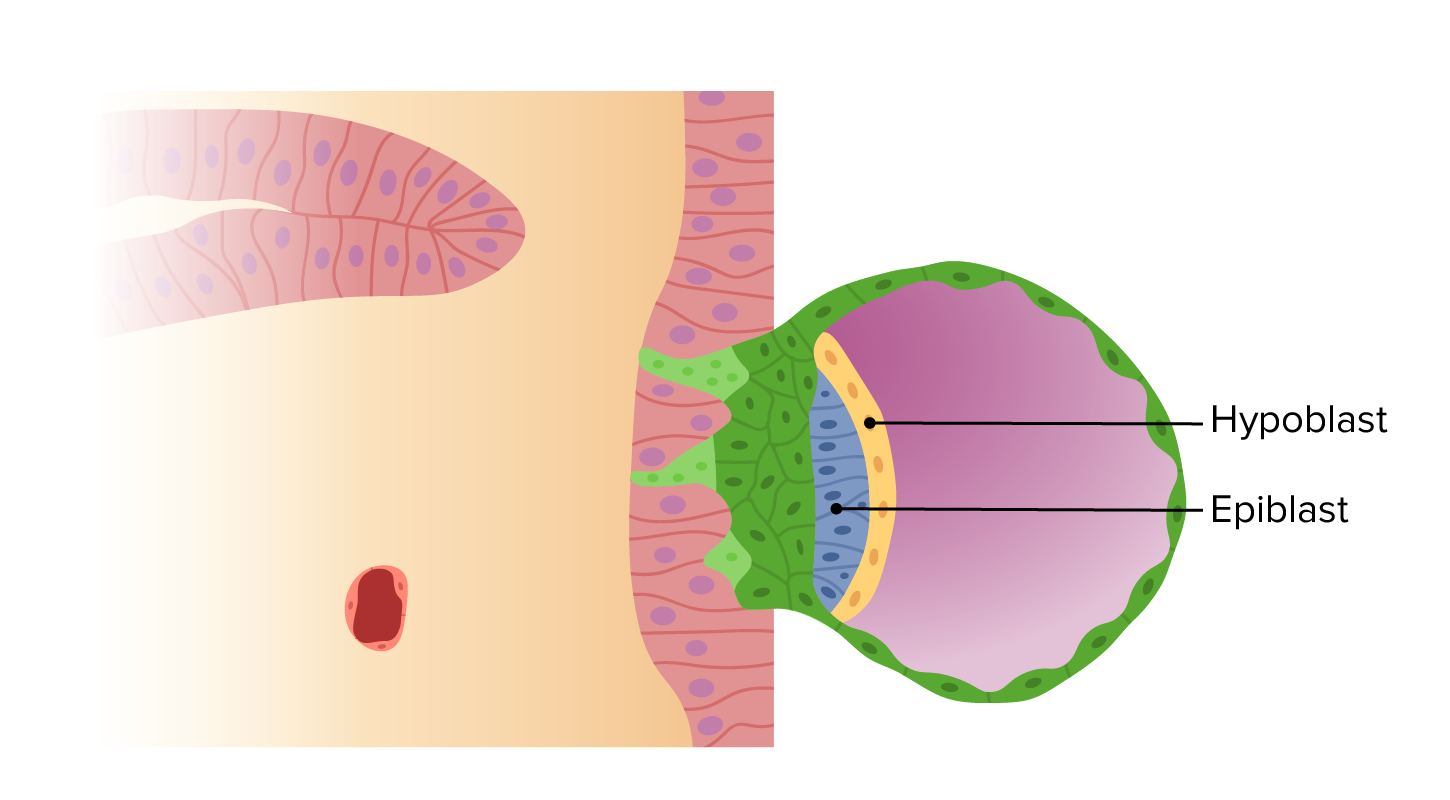 Embryoblast and Trophoblast Development
Before the developing blastocyst reaches the uterine wall, it needs to undergo several stages of differentiation. After a continuous process of cleavage and compaction, the morula gives rise to the trophoblast and embryoblast, which are the primary components of the blastocyst. Uterine fluid passes through the zona pellucida to form the blastocyst cavity. When the blastocyst reaches the endometrium, implantation begins by the trophoblast dividing into the cytotrophoblast and syncytiotrophoblast, with the syncytiotrophoblast primarily being responsible for invading the endometrium. The embryoblast divides into the epiblast and hypoblast, which are responsible for creating the amniotic cavity and yolk sac, respectively.
read more 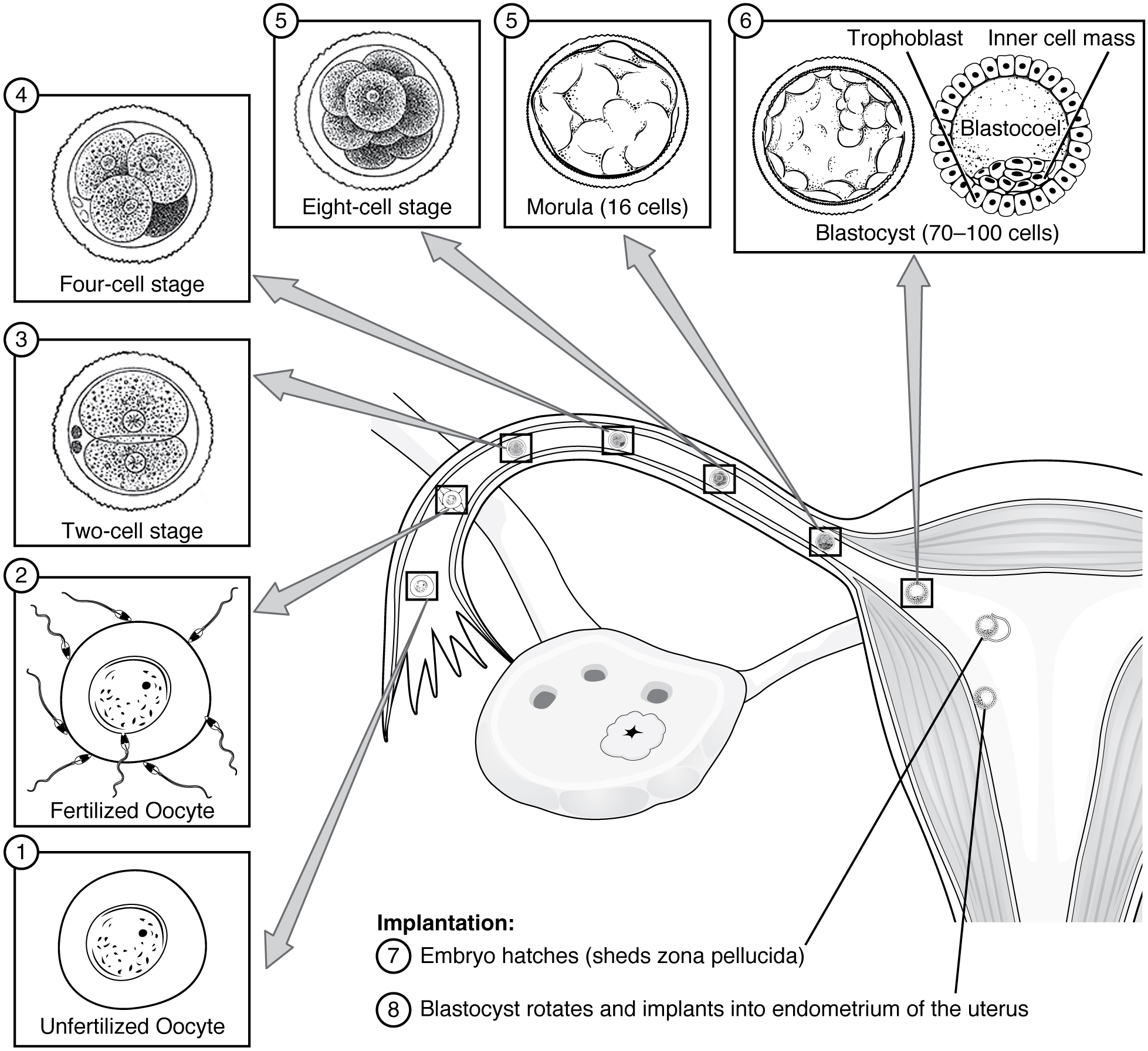 00:01 Hello, and welcome to the first lecture in the series of lectures on embryology during which time we´re going to explore how we moved from a single cell to a mature human being in form and function. 00:12 Initially, what we´re gonna notice is that the developing embryo looks very indistinct and not at all human. 00:20 It can best be described as a clump of cells that developed a series of fluid filled spaces and then gradually adds complexity to it developing different organ systems until we arrive at a mature human state. 00:34 If we look at this illustration moving clockwise across the top of the page, we can see that the human embryo begins as more or less an indistinct clump and elongates as processes take place and bring about the central nervous system, formation of the head, the limbs and even a tail. 00:52 As we progress around the image we can see that the tail segment gradually becomes replaced by the lower limbs and the umbilical cord comes into existence as the head and limbs become more and more distinct. 01:05 The changes on the outside of the embryo are mirrored by changes on the inside as indistinct cell clusters formed distinct organ systems and mature and by the time we´ve left the embryonic period and enter the fetal period, we have a very tiny developing human being with all the primordial of every organ system that will continue to develop up until the time of birth at roughly 9 months of gestation. 01:31 As we follow the process of human development, we´ll begin with a single celled zygote which will undergo a series of divisions, eventually leading to the trilaminar embryo, a three-layered structure consisting of ectoderm, mesoderm and endoderm. 01:46 From this basis we´ll follow the formation of every organ system starting with the back and limbs, we´ll then move to the head and neck along with the formation of the nervous system. 01:57 Then to the thorax we will investigate the cardiovascular and respiratory systems formation. 02:03 Then to the abdomen we will see how the gastrointestinal tract and all of its glands are going to form, migrate and take up their mature position. 02:12 And then we´ll move into the pelvis, we will see the reproductive system and renal systems develop, migrate and change depending on whether we´re forming a male or a female body. 02:24 Thereafter, we´ll move to a microscopic investigation of the germ cells, the oocytes and spermatozoa, and how they form and are capable of fertilizing one another to produce a new and growing embryo. 02:38 We´ll then follow that growing embryo to the point of implantation into the uterus and how its growth is sustained by the placenta and umbilical cord. 02:48 Along the way we´re gonna draw as much attention as possible to any clinically relevant or high yield topics that not only illustrate all the things that can go wrong in the process of embryology, but illustrate the relevance and extreme importance of it in clinical practice.

What is the name of the process of the formation of a trilaminar embryo?

Clear with great visual aids
By Victoria W. on 28. November 2018 for Introduction and Early Development

Great lecture
By Sasha M. on 29. May 2018 for Introduction and Early Development

Interesting and engaging, definitely someone i can follow and learn from.

Clear with great visual aids
By Victoria W. on 28. November 2018 for Introduction and Early Development

Great lecture
By Sasha M. on 29. May 2018 for Introduction and Early Development

Interesting and engaging, definitely someone i can follow and learn from.