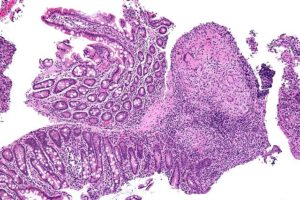 Inflammatory Bowel Disease (IBD) — Types, Causes and Treatment
Inflammatory bowel disease (IBD) is a group of conditions that affect the gastrointestinal system. IBD consists of autoimmune diseases that attack the GI mucosa, resulting in inflammation of the gut wall. For this discussion, we will be focusing on ulcerative colitis (UC) and Crohn’s disease (CD). The main differences between the two are that ulcerative colitis mainly involves the large intestine and rectum while Crohn’s disease can affect the GI system anywhere from the mouth to the anus and usually skips the rectum. Other conditions such as microscopic colitis and Behçet's disease are also types of IBD. IBD is different from irritable bowel syndrome (IBS) which is a functional disorder that is defined as abdominal pain and bowel movement changes.
read more
Load more
Share
Ask Questions
Take Notes
Download Slides
Report Mistake
Comments
show all Show less
My Notes
show all Show less
Learning Material 2
show all Show less
Report mistake
Transcript
0 of 0

The lecture Inflammatory Bowel Disease Medication by Pravin Shukle, MD is from the course Gastrointestinal Pharmacology. It contains the following chapters:

Which of the following is a common way to classify inflammatory bowel disease?

Which of the following best describes the different formulations of 5-aminosalicylates (5-ASA)?

Which drug used for inflammatory bowel disease is associated with a low risk of lymphoma?

What vitamin must be supplemented in a patient starting methotrexate therapy?

Which of the following drugs used in the management of inflammatory bowel disease is classified as a human monoclonal antibody?