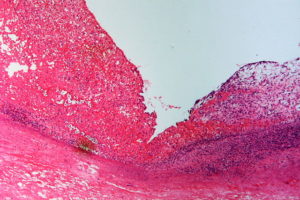 Endocarditis (Inflammation of the Heart Valve) — Classification, Diagnosis and Treatment
As an inflammatory disease of the interior heart lining, endocarditis mostly manifests in the area of the cardiac valves. In addition to that, an inflammation in the area of the atria or the ventricles is also possible. There can be both infectious and non-infectious causes. Mixed forms are possible as well. Rarely, endocardial-myocardial fibroses or medicament-induced cardiac valve changes occur.
read more
Load more
Share
Ask Questions
Take Notes
Download Slides
Report Mistake
Comments
show all Show less
My Notes
show all Show less
Learning Material 2
show all Show less
Report mistake
Transcript
0 of 0

00:01 In our discussion of cardiovascular infections, perhaps the most important is that of infective endocarditis. 00:12 It’s defined as an infection of the endothelial surface of the heart. That’s usually heart valves. 00:21 But if you think about it, if you have a persistent infection anywhere in the vasculature, it could produce something similar to infective endocarditis. Occasionally, it’s from a damaged endocardial surface. 00:38 There have been cases of endocarditis following an acute myocardial infarction where the vegetations are found on the damaged heart muscle. Many patients nowadays have pacemakers in. 00:55 So, you can get an infection related to a pacemaker wire that sheds organisms into the bloodstream and causes something very similar to a valvular infection. It’s worthwhile to give an overview of the history of infective endocarditis because it has changed in the era of modern medicine. 01:24 Back in the 1920s, the mean age of a person getting infective endocarditis was less than 30 years. 01:34 This reflects congenital heart disease and rheumatic fever. It had moved up to about 40 years of age in the 1940s. 01:47 But in the present era, the mean age of a person getting infection of their heart valve is over 50 years of age. 01:56 Males outnumber females two to one. It’s an infection that’s uncommon in children, thank goodness, unless they have some septal defect repaired related to congenital heart disease. Infants can get infective endocarditis because now, small babies are kept alive. If it were in the past, they weren’t able to be kept alive. They have lots of catheters for venous and arterial access put in these little babies and so they can get endocarditis. The predisposing conditions between 1938 and 1967 were primarily valvular heart disease that is congenital heart disease and rheumatic heart disease accounted for about 40% of the damaged valves leading to infective endocarditis. It’s important to point out that this still is a very common predisposing factor in developing countries. Patients who’ve had endocarditis in the past are particularly predisposed to get it again. Non-cardiac underlying disease was seen then in IV drug users, in diabetics, and in patients with urological infections, usually those undergoing instrumentation. 03:45 But the predisposing conditions in the 2000s are still valvular heart disease, congenital. 03:55 But now, instead of rheumatic heart disease, we’re talking about degenerative valve disease. 04:00 People are living longer long enough for their valves to degenerate. That includes the mitral and aortic valves. 04:11 A condition that wasn’t easily recognized until the era of echocardiography was that of mitral valve prolapse. 04:23 Now, mitral valve prolapse with regurgitation, in other words, the mitral valve not only prolapses into the left atrium but leaks blood through it, they have a three to eight fold increased risk of endocarditis. 04:40 So, this is one of the leading problems in the heart that predispose to endocarditis. 04:48 But mitral valve prolapse without regurgitation, that risk is about the same as the general population. 04:59 Unless you’re examining the heart carefully, you may miss somebody who has mitral valve prolapse with regurgitation. 05:10 Mitral valve prolapse with regurgitation may be preceded by a click and then a midsystolic murmur that is more ejection in quality. Simple mitral valve prolapse would be often heard as a midsystolic click. 05:29 But rheumatic heart disease is not out of the picture. It still accounts for about 3% of the predisposing conditions. 05:40 And look how much prosthetic valves have increased as a cause of infective endocarditis. 05:50 About 20% of the cases of endocarditis occur in patients with prosthetic valves. Now, we’re doing more things. 06:02 We are putting endocardial devices in like pacemakers, implantable cardiac defibrillators. 06:10 Since those have access to the heart through wires, we are now having those wires get infected. 06:19 They are leaning up against valves in the endocardium and so, endocarditis can occur. 06:29 In terms of non-cardiac underlying disease, IV drug use is still quite prevalent as is chronic IV access. 06:43 As we treat serious disease and maintain IVs in patients, we’re keeping them alive longer, long enough to get infections of these intravenous devices. As I mentioned, degenerative valve lesions are associated with just the longer survival of the population. There’s another interesting reason for an increase in endocarditis. That is because based on the 2007-2008 guidelines for preventing endocarditis, we’re not using antibiotics as much. It used to be if somebody had any kind of history of almost any kind of heart disease and they went to the dentist, the dentist would prescribe an antibiotic. 07:37 We were giving antibiotics essentially willy-nilly for any mention of heart disease. 07:45 Well, based on those guidelines being changed, we no longer give antibiotics for all those indications anymore. 07:55 So naturally, you’ve seen a minimal to moderate rise in the incidence of infective endocarditis. 08:03 In other words, we were abusing antibiotics and that kept endocarditis down. But when we stopped abusing antibiotics, it’s going to rise slightly. We’re putting prosthetic heart valves in people much more commonly. Congenital heart disease also is slightly on the increase because women are waiting longer to become pregnant. With that comes an increased incidence of congenital heart disease. 08:34 Furthermore, lots of medications are now being used during pregnancy in the effective doses, not essentially clear but may have something to do with congenital heart disease. 08:46 So, it’s advances in medicine and surgery that have sparked some of the increase in infective endocarditis: pacemakers, defibrillators, dialysis catheters, you name it. Look at the incidence of IV drug use in North America. From the 1960s to the 2000s, there’s been an increase in staphylococcal endocarditis from about 25% to 52% reflecting the use of illicit drugs. 09:22 The other reason that endocarditis seems to be on the rise is because we are now better able to diagnose it than we were, say, back in the 60s. We had essentially blood cultures only to diagnose infective endocarditis then.

The lecture Infective Endocarditis (IE): Definition and Epidemiology by John Fisher, MD is from the course Cardiovascular Infections.

Which of the following is LEAST likely to have contributed to an increased number of infective endocarditis cases over the past decades?

Which of the following most significantly increases the risk of developing endocarditis?

Compared to the general population, which of the following is the best estimate of the risk of infectious endocarditis in a patient with mitral prolapse without mitral insufficiency?

Which of the following is a risk factor for developing infective endocarditis?

Which of the following demographics has the highest prevalence of infective endocarditis at the present time?

(3) 3,0 of 5 stars
Excellent explanation
By Mohamed Omar S. on 20. May 2020 for Infective Endocarditis (IE): Definition and Epidemiology

Excellent explanation, I was able to understand the topic thoroughly. Thank you Sir.

I did not like this lecture
By Dr Jerry G. on 09. February 2018 for Infective Endocarditis (IE): Definition and Epidemiology

He is reading the lecture and not elaborating much. Makes pauses that makes me sleepy and he is does not make it exiting to learn.

(3) 3,0 of 5 stars
Excellent explanation
By Mohamed Omar S. on 20. May 2020 for Infective Endocarditis (IE): Definition and Epidemiology

Excellent explanation, I was able to understand the topic thoroughly. Thank you Sir.

I did not like this lecture
By Dr Jerry G. on 09. February 2018 for Infective Endocarditis (IE): Definition and Epidemiology

He is reading the lecture and not elaborating much. Makes pauses that makes me sleepy and he is does not make it exiting to learn.