Anti-HIV Drugs
Antiretroviral therapy (ART) targets the replication cycle of the human immunodeficiency virus (HIV) and is classified based on the viral enzyme or mechanism that is inhibited. The goal of therapy is to suppress viral replication to reach the outcome of undetected viral load. Currently, reverse transcriptase, protease, integrase, and entry inhibitors are used in combined ART (cART) regimens. Combination therapy (3-drug regimen) is used to prevent drug resistance and cross-resistance, which develop through genetic mutations.
read more 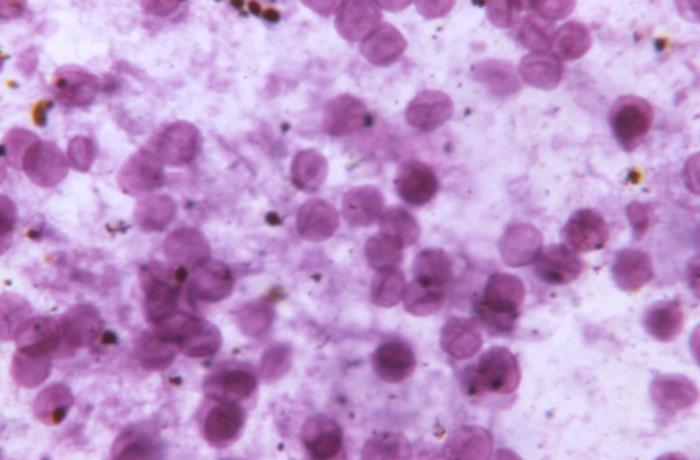 Pneumocystis jiroveci/Pneumocystis Pneumonia (PCP)
Pneumocystis jiroveci is a yeast-like fungus causing pneumocystis pneumonia (PCP) in immunocompromised patients. Pneumocystis pneumonia is spread through airborne transmission and classically affects patients with AIDS, functioning as an AIDS-defining illness. Patients may present with insidious onset of fever, chills, dry cough, chest pain, and shortness of breath. The diagnosis is supported by an increased β-D-glucan level and diffuse, bilateral infiltrates on chest imaging in the immunocompromised patient. A definitive diagnosis can be given with microscopy of induced sputum or specimens from bronchoalveolar lavage (BAL). Management involves antimicrobial therapy with a trimethoprim-sulfamethoxazole combination, and supportive care. Addressing the etiology of immunodeficiency is paramount. Prophylaxis is often required to prevent infection or reinfection.
read more

Which of the following best describes the common findings in acute retroviral syndrome?

Which of the following is the antibiotic treatment of choice for Pneumocystis jirovecii pneumonia in patients with HIV?

Which of the following types of infection is an AIDS-defining condition?

What structure does india ink stain allow the observer to see on microscopy?

Which of the following is the most common method of confirming the diagnosis of disseminated infection caused by mycobacterium avium complex (MAC) in persons with HIV?

Which of the following refers to paradoxical worsening of a preexisting infectious process following initiation of antiretroviral therapy in a patient with HIV infection?

Which of the following is the imaging modality of choice in the diagnosis of Toxoplasma gondii encephalitis?

I am an RN student, 2nd semester. This lecture is very informative. I like when it describing the opportunistic infection, the lecture provides info from the type of illness, s/s, type of diagnostic tests, and treatments.

I am an RN student, 2nd semester. This lecture is very informative. I like when it describing the opportunistic infection, the lecture provides info from the type of illness, s/s, type of diagnostic tests, and treatments.