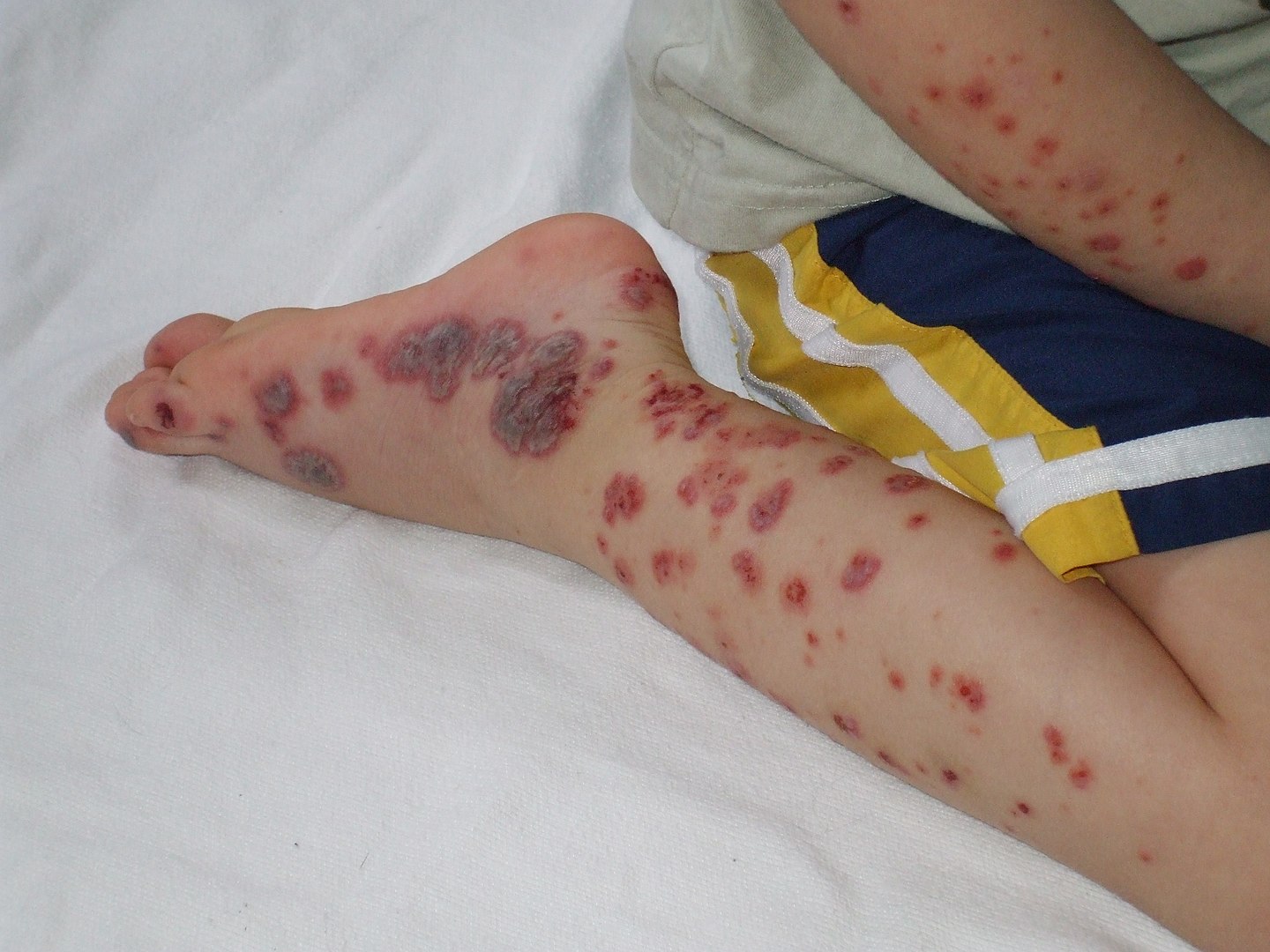 Henoch-Schönlein Purpura
Henoch-Schönlein purpura (HSP), also known as immunoglobulin A vasculitis, is an autoimmune small-vessel vasculitis that typically presents as a tetrad of abdominal pain, arthralgia, hematuria, and purpuric rash. The pathophysiology involves the deposition of IgA immune complexes in multiple vessels following a trigger (infection/environmental), and the symptoms depend on the tissues that are involved. The diagnosis is established clinically, but can be supported with laboratory studies and skin or kidney biopsy. Management is mostly supportive, but may involve steroids and immunosuppressants in more severe cases. Prognosis is usually excellent, but some patients may develop end-stage renal failure.
read more
Load more
Share
Ask Questions
Take Notes
Download Slides
Report Mistake
Comments
show all Show less
My Notes
show all Show less
Learning Material 2
show all Show less
Report mistake
Transcript
0 of 0

00:01 In this lecture, we'll discuss Henoch-Schönlein Purpura or HSP for short. 00:07 So here's a classic case. A boy comes in with a rash. 00:11 He's 12 years old, he has severe abdominal pain, and he's had blood in his urine for the past week. 00:17 Here, you can see a picture of what that rash might look like. 00:20 It's an erythematous rash with palpable purpura and petechiae over the legs and the buttocks. 00:27 So what's your diagnosis? This is HSP. 00:31 HSP is the most common vasculitis in children. 00:35 We see it frequently. 00:37 It usually has a preceding upper respiratory illness, like a virus or a cold or group A strep in 80% of cases. 00:48 After that illness is done, patients develop a small vessel vasculitis and a deposition of IgA. 00:57 This affects mostly the kidney, the skin, the gut, and the joints. 01:03 So, let's go through these symptoms. 01:05 The first is the skin. 01:07 100% of children with HSP are eventually going to develop this rash. 01:14 It's mostly in gravity-dependent areas, so it may occur in the legs or the buttocks region because they're sitting or in very young children who usually don't get this disease, it may be somewhere else that's gravity-dependent. 01:28 Or in a patient with, say, cerebral palsy who's wheelchair-bound, its distribution may be different. 01:36 There's a delay in the rash in 1/3 of cases. 01:40 That means that they'll present with the other symptoms first. 01:45 So in your differential for the acute abdomen is HSP, but the rash hasn't quite shown up yet. 01:53 I once saw a case of a child with severe abdominal pain that had been going on for 3 weeks before their rash finally showed up and we were able to make the diagnosis. 02:03 The rash may recur periodically before resolving in that the patient comes in with the rash, it gets better, and then a month later, it comes back. 02:14 Arthritis is common in these children and it happens in about 85% of patients. 02:20 It's usually migratory and transient and may involve one or just a few joints. 02:28 It's rarely the primary complaint, but it can hurt and we can help that arthritis pain. 02:36 GI involvement is common in these children and affects about half of patients. 02:41 Remember, those purpura are not only happening in the skin, they're happening inside as well. 02:48 GI involvement may be extremely painful. 02:51 It may hurt with those purpurae inside in the intestines. 02:57 Additionally, this is a complicated thing but we should go over it. 03:02 In patients with HSP, they have purpura on the inside of the lumen of their intestine. 03:09 Just like we discussed in our lecture on intussusception, patients with HSP can develop an intussusception. 03:18 Unlike our usual 2-year-old with a standard intussusception, however, because the purpura are anywhere along the enteric tract, these purpura can cause an intussusception that is not ileocecal and into the cecum but rather ileoileal. 03:37 The reason why that's important is we would not try to diagnose intussusception in a child by doing an air enema. 03:44 We would get an ultrasound and it's entirely possible if the intussusception was ileoileal, we would proceed straight to surgery as opposed to trying an air enema first. 03:57 So, here's an ultrasound, and you can see that typical targetoid lesion right there that is responsible for the disease. 04:06 Additionally in HSP, patients can have renal involvement and the renal involvement is actually the part that we're the most worried about. 04:15 These patients may present with hematuria. 04:19 They may also develop proteinuria, but usually the hematuria is more likely and it can be gross hematuria with grossly bloody urine. 04:28 The reason we're worried about the renal involvement is this is the only part of the HSP that may become a chronic illness. 04:36 These patients can develop chronic irreversible renal damage that can cause them to go on to need in the future even a transplant. 04:47 There's basically a 6-month window in HSP for determining whether the renal involvement will go away or become permanent. 04:56 If a patient has resolution of symptoms within 6 months, they'll probably be just fine. 05:02 If their symptoms persist past 6 months, we're worried about chronic renal failure. 05:08 So it's important in these patients to continue to screen their urine on a monthly basis until at least 6 months out and then refer them to a nephrologist if they have persistent symptoms. 05:20 In terms of testing for HSP, it's not a diagnostic test that decides whether the patient has the disease. 05:30 This is a clinical diagnosis based on the constellation of symptoms that we've already described. 05:35 There are some tests that might confirm the disease, however, or at least tell you you're going in the right direction. 05:41 First, the sed rate and the CRP are usually elevated. 05:46 The urinalysis is critical, like we spoke about, in terms of looking for urinary symptoms and the abdominal ultrasound may show you some intussusception. 05:59 Care for HSP is mostly supportive. 06:02 We're going to give pain medication, hydration, and rest, and most of these patients will get better. 06:10 Steroids are somewhat controversial. 06:13 However, it has shown that steroid therapy will help with both abdominal pain that is not intussusception and joint pain. 06:22 So abdominal pain and joint pain that is severe is usually treated with steroids. 06:27 However, if the patient's abdominal pain isn't that bad and they don't have joint pain, we will not give these patients steroids. 06:36 Prednisone does not affect the long-term renal disease and has no impact on long-term outcome. 06:43 We really reserve it only for patients with joint pain or with abdominal pain as a palliative measure. 06:50 Usually, this disease will resolve on its own after 1–2 months, though it is common to have a minor recurrence up to 4 months later. 06:58 So that's a brief summary of HSP. 07:01 Thanks for listening.

The lecture Henoch-Schönlein Purpura (HSP, Spring Fever) by Brian Alverson, MD is from the course Pediatric Rheumatology and Orthopedics. It contains the following chapters:

Which of the following drugs is used to treat abdominal and joint pain in patients with Henoch-Schonlein Purpura (HSP)?

Which of the following is a GI complication of Henoch-Schonlein Purpura (HSP)?

Regarding Henoch-Schonlein Purpura (HSP), which of the following is not a feature of its characteristic rash?

Which of the following statements about Henoch-Schonlein Purpura (HSP) is correct?

Which of the following is TRUE regarding arthritis in patients with Henoch-Schonlein Purpura (HSP)?

How long is the window for renal involvement in patients with Henoch-Schonlein Purpura (HSP)?

it was a though topic in the past, I was trying to remember things just by lecture, but you make me clarify all of my doubts, thanks a lot, I wont forget the topic

recommend a watch
By anam S. on 30. May 2018 for Henoch-Schönlein Purpura (HSP, Spring Fever)

this is really clear, cuts to the chase, pleasantly taught

it was a though topic in the past, I was trying to remember things just by lecture, but you make me clarify all of my doubts, thanks a lot, I wont forget the topic

recommend a watch
By anam S. on 30. May 2018 for Henoch-Schönlein Purpura (HSP, Spring Fever)

this is really clear, cuts to the chase, pleasantly taught