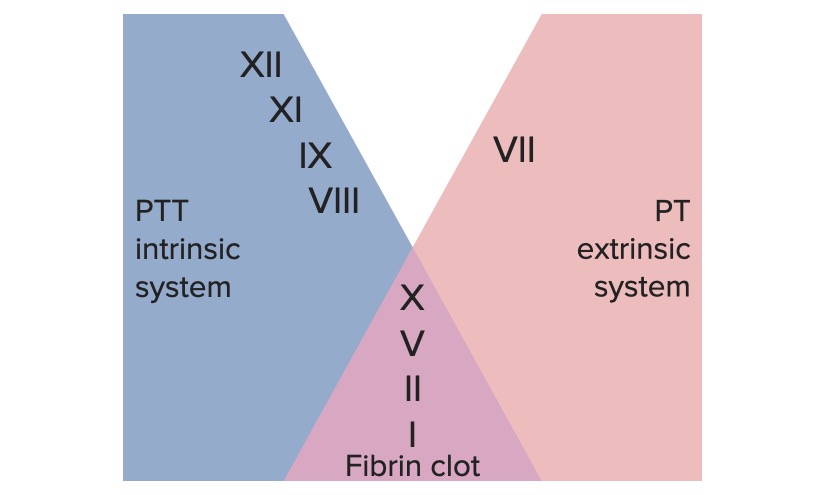 The lecture Hemostasis – Bleeding Disorders by Paul Moss, PhD is from the course Hematologic Disorders.

Which ONE of these is NOT true concerning platelets and their function?

Which of the following molecules is the major regulator of platelet production produced by the kidneys and liver?

Which of the following molecules is involved in platelet adhesion?

Which ion is required for the platelet adhesion reaction?

Which of the following factors does not effect aPTT?

Which of the following factors is now thought to be critical to the initiation of coagulation?

Which of the following results in the release of granules from platelets?

Of the clotting study results shown below, which is most likely to belong a patient with Hemophilia?

Which of the following is strongly associated with PT prolongation?

A 40-year-old female presents with bone pain and gum bleeding. Her CBC reveals leukocytosis. The patient has both a prolonged PT and aPTT with a low fibrinogen. What is the most likely cause of her presentation?

Which of the following is calculated as a ratio of measured prothrombin time to a standard value determined in the laboratory?

I like schemas and order of giving material. Easy to use and understand.

Hemostasis and Coagulation cascade
By Victoria S. on 23. October 2017 for Hemostasis – Bleeding Disorders

very good slides and explanations! Nice voice to listen to

I like schemas and order of giving material. Easy to use and understand.

Hemostasis and Coagulation cascade
By Victoria S. on 23. October 2017 for Hemostasis – Bleeding Disorders

very good slides and explanations! Nice voice to listen to