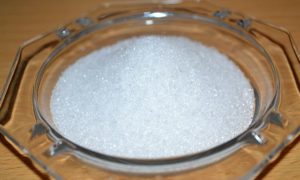 Fructose – Transport, Degradation and Biosynthesis
Fructose is a carbohydrate that naturally occurs in fruits and is in the form of sucrose,included in many other foods. While congenital disorders of the fructose metabolism and fructose intolerance are relatively rare, numerous clinical trials have proven a correlation between increased fructose uptake and disorders such as the metabolic syndrome and the non-alcoholic fatty liver disease.
read more
Load more
Share
Ask Questions
Take Notes
Download Slides
Report Mistake
Comments
show all Show less
My Notes
show all Show less
Learning Material 2
show all Show less
Report mistake
Transcript
0 of 0

00:01 Now another very important consideration particularly in places where there is high fructose corn syrup is a reaction I am gonna show you on the screen here. 00:10 Now high fructose corn syrup is produced in some places primarily in the US from corn. 00:16 And high fructose corn syrup has, as its name suggests, high quantities of fructose within it. 00:21 It has greater than 50 % fructose. So if you eat sucrose for example, you get fructose and glucose in about equal quantities. 00:30 If you eat high fructose corn syrup, the balance is shifted in favor of fructose. 00:35 Now what I am going to tell you here relates more to sugar metabolism in general than just fructose but I use fructose as an example to show you why this could be problematic. 00:47 Now besides the enzymes in glycolysis that I have talked about, there are other enzymes that handle other sugars. So for example the enzyme fructokinase, that you see on the screen, converts fructose into an intermediate called fructose-1-phosphate. 01:01 Now that's a fairly simple reaction, there is simply the addition of a phosphate onto fructose using the energy of ATP. 01:08 That's very much like we saw the hexokinase reaction although it uses fructose and it's putting phosphate in a different place. Nonetheless a simple reaction. 01:18 Fructose-1-phosphate is the target of another enzyme called fructoaldolase. 01:23 And what fructoaldolase does is it converts fructose-1-phosphate into two molecules of 3 carbons each. 01:32 One molecule is called dihydroxyacetone phosphate, you remember that from glycolysis. 01:37 The other molecule is called glyceraldehyde and you learned part of that in glycolysis in the form of glyceraldehyde-3-phosphate. 01:43 Well, the only difference between glyceraldehyde and glyceraldehyde-3-phosphate is the 3-phosphate. 01:50 Cells can easily convert glyceraldehyde into glyceraldehyde-3-phosphate. 01:55 When it does that, the end product is two molecules from glycolysis. 02:00 So I said something was wrong with fructose metabolism. 02:04 This looks like we are simply feeding glycolysis like we were before. 02:08 Why would there be a problem? Well, we don't know the answer of that question but I have an idea about it that I want to share with you here. 02:15 If we look at glycolysis what I have shown in the first few reactions in glycolysis, glucose going to glucose-6-phosphate catalyzed by hexokinase. So in each case the enzyme that does the reaction is shown in orange and the molecule is shown in green. 02:32 Now if we consider what I just described, which is the molecule involving fructokinase and fructoaldolase, we have bypassed the first set of reactions in glycolysis. 02:44 Why was that important? We just produced glycolysis intermediates. 02:48 The reason that's important, is if you remember from glycolysis, we bypass two enzymes that play roles in regulating glycolysis. 02:57 Now, Houston, we might have a problem. 03:00 Because what will happen is without regulation, this pathway, that's feeding it, can make abundant intermediates of dihydroxyacetone phosphate and glyceraldehyde-3-phosphate under conditions with a cell might not normally do that. 03:13 Now yes it is the case that this reaction might occur in the consumption of too much sugar in the first place so it's a good reason perhaps not to drink too much sugar. 03:23 But now if we are starting to feed glycolysis when it normally would not be fed here is what can happen, okay? Bypass the regulatory enzyme, we get to the last half of glycolysis and things are coming down the pike that wouldn't normally come down the pike, the cell would normally shut it off. 03:40 But now this sugar metabolism is force-feeding glycolysis. So, that what could happen? Again, this is my idea, this isn't anybody's proof. 03:48 What could happen with this, is we produce excess pyruvate. 03:53 Why is excess pyruvate a problem? Well, pyruvate turns out to be a precursor of acetyl-CoA and when you have plenty of energy and when you have plenty of acetyl-CoA what you make, a fatty acids. 04:09 And when you make fatty acids, you make fat. 04:11 Some people think and there is pretty good evidence, that high fructose corn syrup correlates with obesity. 04:17 So my advice to you be careful with the carbs that you are taking in.

The lecture Gluconeogenesis: Metabolism of Fructose by Kevin Ahern, PhD is from the course Carbohydrate Metabolism.

Which statement below about the metabolism of fructose is not true?

Which of the following enzymes participate in fructose metabolism before glycolysis? (choose all that apply)