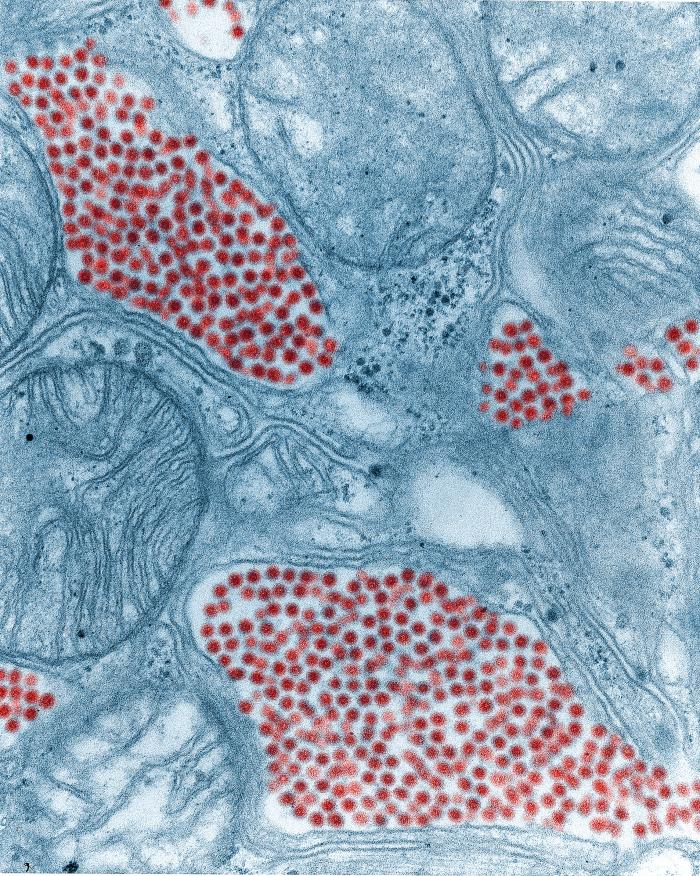 Equine Encephalitis Viruses
Equine encephalitis viruses (EEVs), belonging to the Togaviridae family and Alphavirus genus, are mosquito-borne arboviruses that infect humans and cause minor illness or, in severe cases, encephalitis. The eastern equine encephalitis (EEE) virus complex consists of the EEE virus, found in North America and the Caribbean; and the Madariaga virus, found in South and Central America. Other viruses in this complex include western EEV and Venezuelan EEV. The virus is maintained in a cycle between mosquitoes and avian hosts, but can spread to humans via bridge vectors (other species of mosquitoes). Initial symptoms after the mosquito bite include fever, headache, and vomiting. A majority of patients recover, but the illness can progress to severe encephalitis. Diagnosis is by clinical findings and CSF analysis using serology, and also by virus antigen or genomic sequence detection. There is no specific treatment, and therapy is largely supportive. Prevention of mosquito bites is key in management.
read more 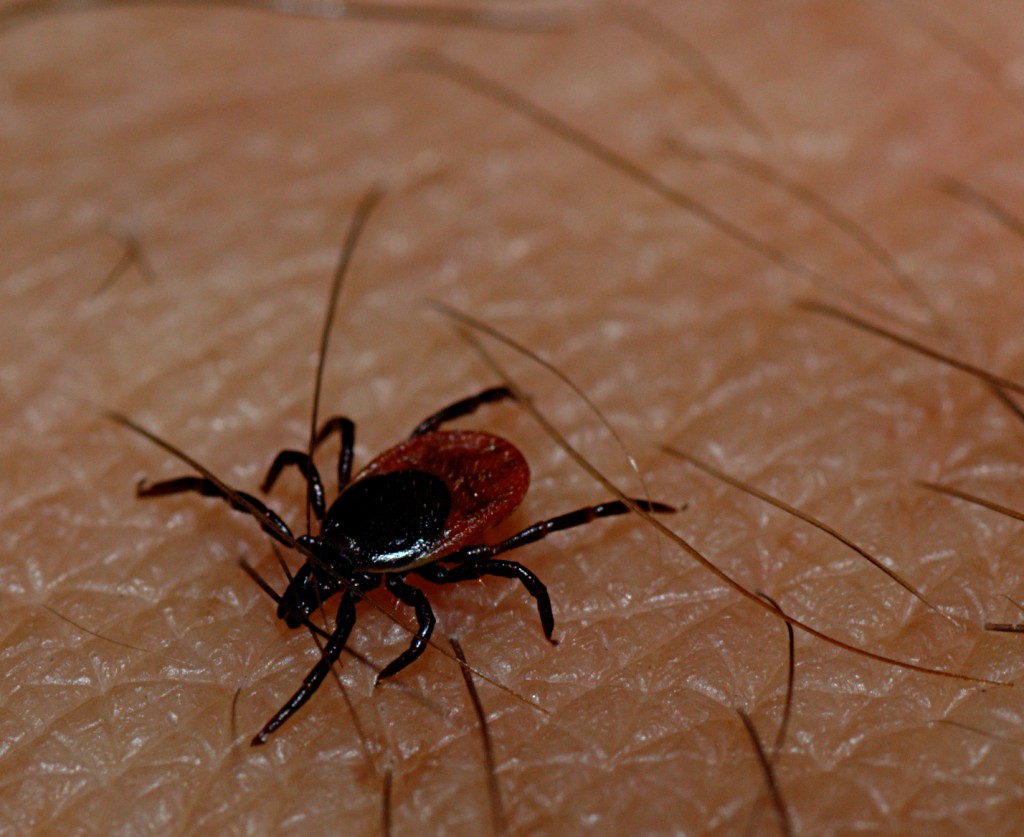 Tick-borne Encephalitis Virus
Tick-borne encephalitis virus (TBEV) is a positive-sense, single-stranded RNA virus of the genus Flavivirus. Transmission occurs primarily via Ixodes ticks found in Europe, the former Soviet Union, and Asia. The virus causes tick-borne encephalitis. Most patients are asymptomatic; however, symptomatic individuals may experience a biphasic illness. After recovering from nonspecific symptoms, patients can develop neurologic manifestations, such as meningitis, encephalitis, or meningoencephalitis. Serology or PCR can confirm the diagnosis. There is no effective antiviral therapy for TBEV infections, so management is supportive.
read more 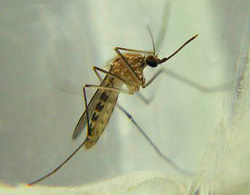 St. Louis Encephalitis Virus
The Saint Louis encephalitis virus (SLEV) is a member of the genus Flavivirus and is the cause of St. Louis encephalitis. This small, enveloped, positive-sense, single-stranded RNA virus is transmitted by Culex mosquito species and is prevalent in the United States. Most infections are asymptomatic. Symptomatic individuals may have varied presentations, with flu-like symptoms, aseptic meningitis, encephalitis, or meningoencephalitis. The diagnosis is confirmed with serology. There is no effective antiviral treatment, so management is supportive. Prevention is aimed at local mosquito control and personal protection with insect repellent and protective clothing.
read more 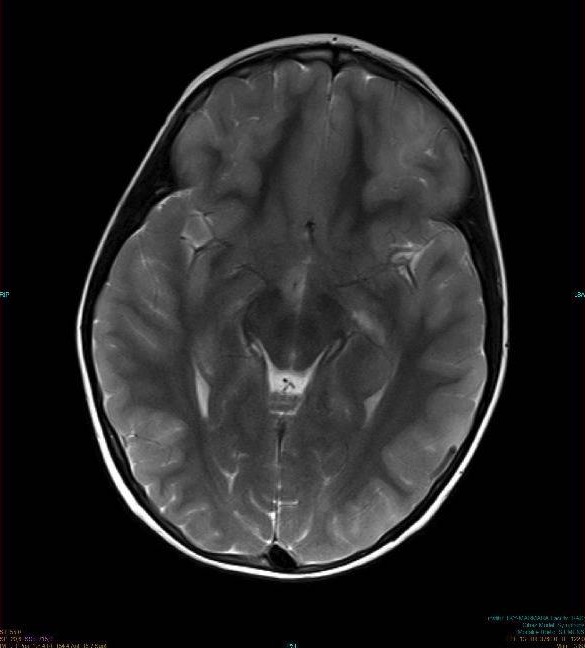 Encephalitis
Encephalitis is inflammation of the brain parenchyma caused by an infection, usually viral. Encephalitis may present with mild symptoms such as headache, fever, fatigue, and muscle and joint pain or with severe symptoms such as seizures, altered consciousness, and paralysis. The diagnosis is based on clinical suspicion, and once suspected, immediate empiric treatment is warranted to prevent catastrophic and long-term neurologic sequelae. Encephalitis is managed with supportive measures and antiviral therapy. Focal neurologic defects are common after encephalitis, and hence, physiotherapy is usually required.
read more
Load more
Share
Ask Questions
Take Notes
Download Slides
Report Mistake
Comments
show all Show less
My Notes
show all Show less
Learning Material 2
show all Show less
Report mistake
Transcript
0 of 0

00:01 Let's discuss first the pathogenesis of the vector-borne viruses. 00:08 Most of these have an animal or enzootic cycle without human infection. 00:13 In other words, they cause disease in animals that never gets to humans. 00:17 For example, the equine encephalitidis. 00:24 They are spread by the bite of a mosquito or a tick and the virus is able to replicate in dendritic cells and macrophages in the local tissue near the bite, spreads to the lymph nodes, and from the lymph nodes gains access to the bloodstream causing viremia and spread to the central nervous system. 00:50 And there are multiple host and viral factors involved. 00:55 First of all, there is infection of endothelial cells, blood vessel cells. 01:01 The ability to penetrate the micro vasculature and penetrate the choroid plexus in the brain and then when they get into the brain they cause infection and death of neurons either directly or by apoptosis, which is an important mechanism of nerve cell destruction. 01:28 Rabies, on the other hand, is common in developing countries in dogs, but pretty rare in developed countries. 01:40 In fact, there have been no cases from dog bites in the United States or Puerto Rico in the last four years from dog bites. 01:50 And in developed countries, 93% of rabies is from raccoons, and most importantly, from bats. 02:01 Skunks and foxes also can carry these. 02:06 And the bottom line is, these animals are normally afraid of human beings. 02:12 So, for example, if a raccoon walks into your yard and doesn't seem to be afraid of you, that raccoon may well be rabid. 02:22 Ditto a fox. 02:27 And in rabies, the bite from the infected animal is teeming with saliva viruses. 02:36 And the saliva invades the motor and sensory nerves at the site of the bite and the incubation period can be short, say, seven days or six years or longer. 02:52 And what happens is that the virus moves to the dorsal root ganglia and the spinal cord and then causes neuropathic pain and then moves up the spinal cord to cause encephalitis. 03:07 And the closer the bite is to the brain, for example, a bite on the face, the more rapid is the incubation period. 03:16 The prodrome consists of nonspecific flu-like symptoms, there may also be specific neurologic signs and symptoms at the site of virus entry that are suggestive of rabies infection, including paresthesias, pain and pruritus. 03:28 An acute neurologic syndrome of either encephalitic or paralytic rabies follows the prodrome and typically lasts for two to seven days. 03:36 Manifestations may include hyperactivity, persistent fever, fluctuating consciousness, painful pharyngeal or inspiratory spasms, autonomic stimulation (hypersalivation), hydrophobia and seizures. 03:48 Paralytic rabies is characterized by quadriparesis and sphincter involvement. 03:53 With respect to the pathogenesis of the herpes simplex virus, there are lots of questions that remain. 04:00 The exact mechanism of central nervous system invasion is not really known. 04:05 It could be that the herpes simplex virus causes this classic gingivostomatitis and could cause inflammation of the oral mucosa and the gums and go through the axons to the trigeminal ganglion and then into the central nervous system. 04:24 Or alternatively, it could invade the olfactory bulb through the nasal mucosa, go to the frontal and medial temporal lobe. 04:33 But the cause of cell death and tissue injury is either from direct neuronal killing or from, as in the other viruses, apoptosis.

The lecture Encephalitis: Vector-borne Viruses by John Fisher, MD is from the course CNS Infection—Infectious Diseases. It contains the following chapters:

Which of the following best represents the incubation period for rabies?

Initially after an infected mosquito bite, where do vector-borne viruses commonly replicate?

Which of the following animals is the most common source of human rabies in the United States?

Which of the following rabies-infected bat bites is most likely to have the shortest incubation period before the patient develops symptoms of encephalitis?