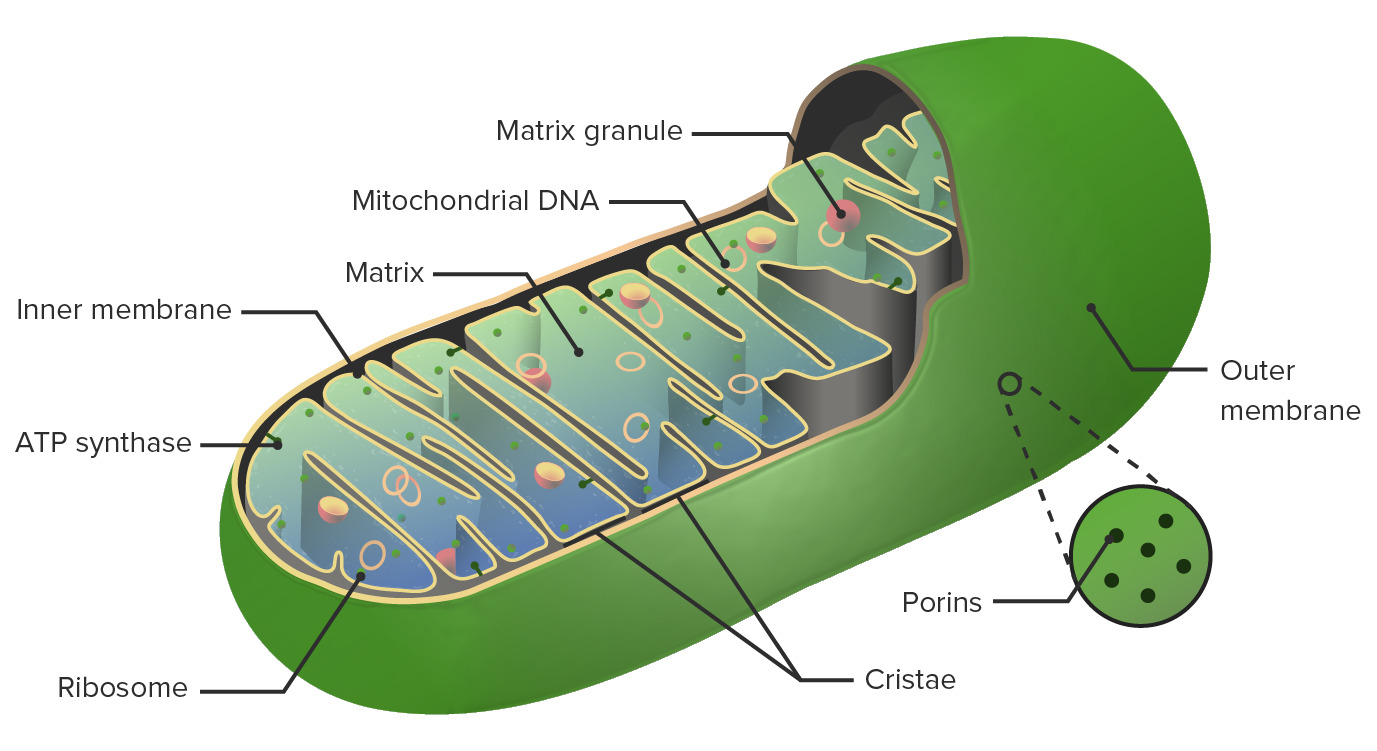 Electron transport chain
The electron transport chain (ETC) sends electrons through a series of proteins, which generate an electrochemical proton gradient that produces energy in the form of adenosine triphosphate (ATP). Proteins generate energy through redox reactions that create the proton gradient. The complete aerobic catabolism of 1 molecule of glucose yields between 36 and 38 ATPs, mostly through energy obtained as the reduced coenzymes NADH and FADH2 are conveyed through the electron transport system. Three of the 4 respiratory complexes that make up the mitochondrial respiratory chain, as well as ATP synthase, are embedded in the inner mitochondrial membrane. Coenzyme Q and cytochrome c transfer electrons between complexes, which will ultimately meet oxygen and generate H2O.
read more
Load more
Share
Ask Questions
Take Notes
Download Slides
Report Mistake
Comments
show all Show less
My Notes
show all Show less
Learning Material 3
show all Show less
Report mistake
Transcript
0 of 0

00:01 and they do this with electron carriers. Now these are molecules that have the ability to absorb the electrons and in this case at least one of the protons, that's released in an oxidative process. So what you see on the screen are two related molecules, NAD+ on the left and NADH on the right. And the only difference between these are actually in the rings of the structure at the very top, you can see them up here. 00:27 The oxidative form of NAD is shown on the left and you can see that the ring structure has three double bonds in it. The reduced form of NAD is called NADH, it has gained a proton and it also gained two electrons and that has caused an electronic rearrangement of that ring. What happened is that ring is now carrying two electrons that it didn't have before and those two electrons could come from a reaction like I just showed. 00:58 Another kind of electron carrier that we’ve seen in cells is that of FAD. FAD can do a similar thing to what NAD did and when FAD does this, it absorbs two protons and two electrons, so it becomes FADH2. And so we can see this happening here where we have the oxidized form on the left and we can see the disappearance of a double bond to form the reduced form that's on the right. Now it's important to remember that these molecules, when they pick up electrons are becoming reduced, okay. 01:29 So here's an example of a biological oxidation. We're seeing the reduction of NAD to NADH and the reason we're seeing the reduction of NAD to NADH is because we're seeing the oxidation of the other compound. Oxidation and reduction are paired. So we see this happening right here, on the left we have a molecule that's called malate. Malate has an alcohol at position number two and that alcohol is being oxidized to a ketone in the molecule on the right. That also involves loss of a pair of electrons and those electrons are grabbed by NAD. There's the reduced form of malate, there is the oxidized form of NAD. 02:13 When the reaction occurs we have the oxidized form of malate, which is known as oxaloacetate and the reduced form of NAD, which is known as NADH. So they've swapped positions because the electrons have swapped positions. 02:26 Now with that in mind, I hope this gives you a good start into the understanding of the processes of oxidation and reduction and we will see in another lecture how these processes come together and allow metabolism to be controlled.

The lecture Electron Carriers – Oxidation and Reduction in Metabolism by Kevin Ahern, PhD is from the course Biochemistry: Basics.

Which of the following statement is NOT true regarding the electron carriers?

Author of lecture Electron Carriers – Oxidation and Reduction in Metabolism