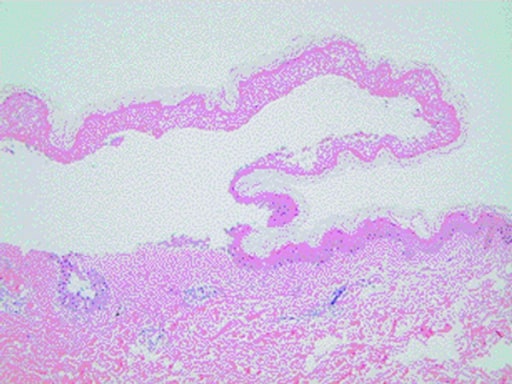 Stevens-Johnson Syndrome
Stevens-Johnson syndrome (SJS) is a cutaneous, immune-mediated hypersensitivity reaction that is commonly triggered by medications, including antiepileptics and antibiotics. The condition runs on a spectrum with toxic epidermal necrolysis (TEN) based on the amount of body surface area (BSA) involved. Stevens-Johnson syndrome is characterized by keratinocyte necrosis and separation of the epidermis from the dermis. Patients will present with a flu-like prodrome, followed by cutaneous bullae and sloughing on the face, thorax, and mucous membranes. Stevens-Johnson syndrome is considered a medical emergency, and management is largely supportive. Withdrawal of the causative agent is required. Monitoring for, and treating, superinfection is essential due to the high risk of associated death in these patients.
read more
Load more
Share
Ask Questions
Take Notes
Download Slides
Report Mistake
Comments
show all Show less
My Notes
show all Show less
Learning Material 2
show all Show less
Report mistake
Transcript
0 of 0

The lecture Derma Case: 71-year-old Woman with a Progressive Skin Rash by Stephen Holt, MD, MS is from the course Allergic and Immune-mediated Skin Disorders.