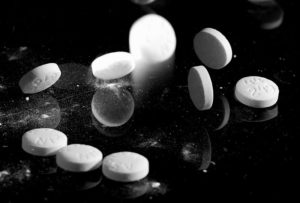 00:01 And so, the creation of the prodrug resulted, relatively simply, just by esterifying one of the carboxylic acid groups resulting in Enalapril, which had the same activity as Enalprilat in vivo, but a thousand times less activity in vitro. It activated, as you can see, via biotransformation in the presence of esterases, which in this case, were found in the liver. 00:25 So, esterase hydrolyses off the alcohol group from Enalapril, thus resulting in the formation of Enalaprilat. This is the active compound that inhibits the Angiotensin-converting enzyme, but as I’ve just said, the Enalapril, on its own, in vitro, doesn’t actually have anywhere near that activity, again, demonstrating the importance of having both carboxylic acid groups available for interaction with the enzyme. 00:53 Now, let’s talk about improving distribution. If we go back to where we were talking about pharmacodynamics and pharmacokinetics, we talked about the blood brain barrier and some of the issues associated with getting drugs in there. In order for a drug to go through, it needs to be a low molecular weight less than 500 daltons and it also needs to be lipophilic or to be able to utilise carrier proteins in the cell membrane which exist to transport, for example, amino acids into the cells. If the drug itself is an amino acid, this should directly increase the passage of a drug across the blood brain barrier and therefore, allow the drug to get to its site of action. One such drug, which is a very old drug now, but is still used is levodopa. This is an intermediary metabolite in catecholamine synthesis. 01:45 It is decarboxylated by dopamine decarboxylate, the results giving dopamine... giving dopamine used in the treatment of Parkinson’s disease. So, as a prodrug, you’ll see what I mean. 01:59 Dopamine itself is far too polar on its own to cross the... to cross the blood brain barrier and is therefore, not in itself, useful as a therapeutic agent. However, levodopa is an amino acid and crosses the blood brain barrier via carrier proteins. 02:14 So, up on the board now, you’ll be able to see two structures; the one on the right is the structure for dopamine. Now, we have this primary amine, which at physiological pH, is going to be largely protonated. The fact it is now largely positively charged prevents its passive diffusion through the blood brain barrier. This, of course, is an issue of getting dopamine where it needs to be in Parkinson’s disease, which is in the brain. And this is where levodopa comes in. Levodopa, which is on the left hand side, as you can see here, is, to all intents and purposes, an amino acid, an alpha amino acid. It has a carboxylic acid group and a primary... primary amine attached to a central alpha carbon. And once it cross the blood brain barrier, which it can do via these carrier proteins which transfer... transfer amino acids through the blood brain... in to the blood brain barrier though into the brain, you can get dopamine produced. This is facilitated by the enzyme dopa decarboxylase and it is this activity that breaks it down and forms dopamine which is the active compound. 03:20 So, levodopa, in this case, acts as a prodrug in of itself, not biologically active, but as a prodrug for decarboxylation to the active compound dopamine, which is useful in treatment of Parkinson’s disease, as I said before. However, there is a problem with this and the problem with this is that the dopa decarboxylase activity is not the preserve of the brain. 03:45 There actually exists this enzyme in the liver, the heart, lungs and the kidney, in fact, there is more of it, in terms of activity in them... than in the brain. Therefore, orally ingested levodopa is converted to, quickly, into dopamine in the periphery and again, not enough of it ends up reaching the brain. As dopamine itself cannot cross the blood brain barrier, historically, high doses of levodopa were needed to overcome losses in the periphery through metabolism. However, one way to get around this problem is by co-administering a dopa decarboxylase inhibitor and also, sometimes a Catechol-O-methyltransferase or COMT inhibitor because another way in which this can be... this can be metabolised, as you can see, is where the oxygens or one of the oxygens of the adjoining alcohol substituent can be methylated by this enzyme. And so, typically, if you are looking at a treatment with levodopa, you’d co-administer Catechol-O-methyltransferase inhibitor and also, a dopa decarboxylase inhibitor to actually reduce the amount of the levodopa which is converting to dopamine before it actually reaches the tissue it needs to, which is the brain.

The lecture Creation of Prodrug by Adam Le Gresley, PhD is from the course Medical Chemistry.

Which ONE of the following statements is TRUE?

During the carrier-mediated transportation of enalaprilat in the GIT, which of the following is assumed to be false?

Enalapril gets activates via…?

What should be the main characteristics of a drug to cross the blood-brain barrier?

Which of the following is NOT a true statement?

To overcome the losses of levodopa in peripheral metabolism…?

Author of lecture Creation of Prodrug