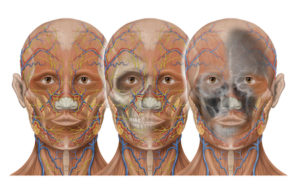 Head and Neck Anatomy
Fascinating but also intensive in terms of learning: This is how medical students describe anatomy in the preclinical part of their studies. Knowledge about the human anatomy is absolutely essential during university and after it. The great amount of study matter seems to be insurmountable at first. However, as soon as one realizes the order of the system, a spark of fascination emerges. Thus, the dissection course provides the first contact to a patient – even if he is lifeless. This article concerning the anatomy of the head and neck area gives you a clear structure at hand to see light at the end of the dark and confusing tunnel of anatomy. Also, the parts concerning the ventral and infrahyoid neck muscles will help.
read more
Load more
Share
Ask Questions
Take Notes
Download Slides
Report Mistake
Comments
show all Show less
My Notes
show all Show less
Learning Material 2
show all Show less
Report mistake
Transcript
0 of 0

00:01 Welcome to this presentation on the cranium. Here, we’re looking at an anterior view of the cranium. We certainly want to explore the features that are related in the anterior view. 00:14 But there’s much more to learn about the cranium. So let’s explore. First, it’s important to understand that the cranium contains three fossae. These are important in clinical imaging as they represent important landmarks for the identification of various lesions that we can see associated with the brain. The first of the three fossae shown here, this is the anterior fossa. 00:48 This is the area that represents the anterior fossa. The second and middle fossa is aptly named the middle fossa. It would be this particular region in through here. Then the last fossa is the posterior fossa. We see it shown in through here. At the base of the posterior fossa, we have the foramen magnum. Let’s explore each fossa individually. As we do so, our interest is on the various openings, foramina that exist in each fossa and the structures that are transmitted through these various passageways. So with the anterior cranial fossa, the first aspect or structural feature to point out here is the presence of these very small cribriform foramina. We see them on either side of the anterior fossa. What’s important about these very small foramina is they’re going to transmit the axons of the olfactory neurons. 02:13 Olfactory neurons are cranial nerve I. These neuronal axons will pass through the foramina and then synapse in the olfactory bulb. Clinically, there can be a fracture of the cribriform plate. If this was to occur, there would be a loss of smell, dysosmia. You could also have a loss of cerebrospinal fluid. This is referred to as rhinorrhea. The loss of fluid would be through the nose. Lastly, you could have an infection developed as result of the fracture. This could result in meningitis, encephalitis. Then brain abscesses are rare complications of infections. This now leads us to the middle cranial fossa and the various openings, passageways that exist here. The first of which is the optic canal. This will transmit the optic nerve. The one on the opposite side is seen here at the arrow. There’s an important landmark that is found within the middle cranial fossa. This is the sella turcica. We see it represented within this rectangular region. We see an area here and here and then we see the posterior borders along and through here. This depression is where the pituitary gland sits. 04:01 The posterior aspect of the sella turcica is referred to as the dorsum sellae. So this particular sella turcica quickly identifies where the pituitary gland is located within the middle cranial fossa and if there are lesions associated with it. So, here again is the optic canal transmitting cranial nerve II, the optic nerve. Another opening that exists within the middle cranial fossa is this fissure. This is referred to as your superior orbital fissure. It will transmit various structures. This would include cranial nerve III, the oculomotor nerve, cranial nerve IV, the trochlear nerve. We also have one division of the trigeminal nerve passing through this opening. That’s V1 or the ophthalmic division of the trigeminal nerve. Then the other structure transmitted through the superior orbital fissure is cranial nerve VI. This is the abducent nerve. The next foramen to note is this opening right in through here. This is referred to as the foramen rotundum. The foramen rotundum will transmit a division of cranial nerve V, the trigeminal nerve. This would be V2 also known as the maxillary division of your trigeminal nerve. The next structure to take a look at is your foramen ovale. This oval-like opening is shown right in through here. This particular structure is going transmit the third and final division of the trigeminal nerve, V3. This is referred to as the mandibular division. The next opening to point out is the foramen lacerum. It is located right in through here. See that opening there. It transmits the deep petrosal nerve and the meningeal artery branches. 06:23 Lastly, we have the foramen spinosum. Foramen spinosum is seen right in through here, right above around into the leader lines, so you can see at least an opening there. 06:40 The foramen spinosum is going to transmit the middle meningeal artery. This particular artery will be highlighted in another presentation as it relates to the development of an epidural hematoma. The third and final fossa is referred to as your posterior cranial fossa. The openings of interest in this particular fossa would be first, the internal acoustic meatus. See that opening right in through here in the temporal bone. This particular opening is going to transmit cranial nerve VII, the facial nerve as well as cranial nerve VIII, the vestibulocochlear nerve. The next opening of interest in the posterior cranial fossa is this opening right in through here. This is referred to as the jugular foramen. It transmits several structures. These include three cranial nerves, cranial nerves IX, X, and XI. Not listed here would be the bulb of the internal jugular vein. The next opening is the hypoglossal canal. This is along the border here of your foramen magnum so it’s difficult to observe here in this particular view because of the angle that we have. This one is going to transmit, as you might guess, the hypoglossal nerve which is cranial nerve XII. Lastly, we have a very large opening in the base of the posterior cranial fossa. This is your foramen magnum right in through here. It’s going to transmit cranial nerve XI which is your accessory nerve. It also transmits the vertebral and the anterior and posterior spinal arteries. At the level of the foramen magnum, this is going to be the transition point between the medulla oblongata, the most distal part of the brain stem and the beginning of the spinal cord.

The lecture Cranial Fossae and Foramina (Superior View) – Cranium (Skull) by Craig Canby, PhD is from the course Head and Neck Anatomy. It contains the following chapters:

Which of the following is NOT a result of a cribriform plate fracture?

Which of the following cranial nerves does NOT pass through the superior orbital fissure?

The artery responsible for the development of an epidural hematoma passes through which of the following structures?

The mandibular division of the trigeminal nerve comes out of the middle cranial fossa through which of the following structures?

Which of the following structures does NOT pass through the foramen magnum?