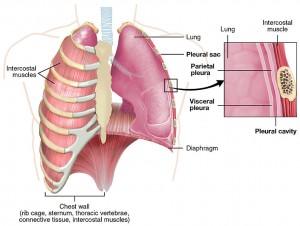 Histology of the Airways
The lung is, similar to the intestines or the skin, an organ that has direct contact with the outside world. Its function is the basis of our existence: gas exchange via diffusion. To perform this enormous task every second of our life, it needs a transport system for waste gasses and fresh air; a room in which the walls are thin enough for gas diffusion, and the transport services for gasses in chemical bonds. To achieve the various functions involved in mechanical respiration, the respiratory tract has adaptation to this function by possessing different histological features.
read more
Load more
Share
Ask Questions
Take Notes
Download Slides
Report Mistake
Comments
show all Show less
My Notes
show all Show less
Learning Material 2
show all Show less
Report mistake
Transcript
0 of 0

00:00 passages to be able to mount an immune response against those antigens that we inhale. 00:01 Let us, first of all, look at the different portions of the lung. There are two major parts of the airways, a conducting portion and then the respiratory portion. Let us, first of all, look at the conducting portion. In this slide, on the right-hand side, you see three images. One is the section through the head region showing you the oral cavity with the tongue and the nasal cavity above it. The very circular like structure down on the bottom right-hand side of this slide is a section through the trachea. You can actually feel the trachea in your neck. You can feel the tracheal cartilages. You have about 16 to 20 of those cartilages that are a very important airway going into the lungs and that is protected by a structure called the epiglottis. The epiglottis sits just above the larynx and it also sits right next to the entry into the esophagus. When we swallow, if you put your fingers around your trachea or near your larynx and you swallow, you can feel the larynx moving upwards. That closes off the airway during swallowing because the epiglottis is an elastic cartilage flap that when you swallow and the larynx is lifted, it closes off across that epiglottis and so food then passes down the esophagus, not down the airways. So that epiglottis is a very important structure. It is flexible, elastic cartilage lying mostly by stratified squamous epithelium because it is wear and tear during swallowing but also the very small component that sits just above the larynx entering to the airway is lined by respiratory tract epithelium. 01:57 We will go to it in more detail later on in this lecture. Now, the larynx is a structure for speech production and I will go through that in more detail at a later time. The bulk of the upper conducting portion of the airway consists of the nasal cavity and just at the back, the nasal pharynx. And if we look at the nasal cavity just above the area here, it is important you roughly know at this stage where it is. You can see a division between the nasal cavity and the oral cavity that is the hard palate, and the soft palate towards the posterior aspect. Well, when air passes down through the trachea, it passes through another series of tubes called bronchi. A single bronchus is labeled here. You can see a couple of them in this section and also some large blood vessels. They too are part of the conducting portion of the respiratory tract and they will divide as they go deeper down into the lung into very small units called bronchioles and that completes the conducting portion of the lung. Now, the importance of this conducting portion is firstly to warm the air, and then to moisten the air, and then to clean the air of all any inhaled debris we might happen to inhale into a nasal cavity and we try to prevent that from getting down into the lungs. So it is a very important function of the conducting portion, warm, moisten and clean the air. Well, here is a couple of complicated diagrams but I want to just

The lecture Conducting Portion by Geoffrey Meyer, PhD is from the course Respiratory Histology.

Which of the following is NOT a component of the conducting portion of the respiratory system?

The closure of the airways during swallowing involves the movement of the larynx. This movement is primarily in which direction?

The epiglottis is mainly covered by which type of epithelium?