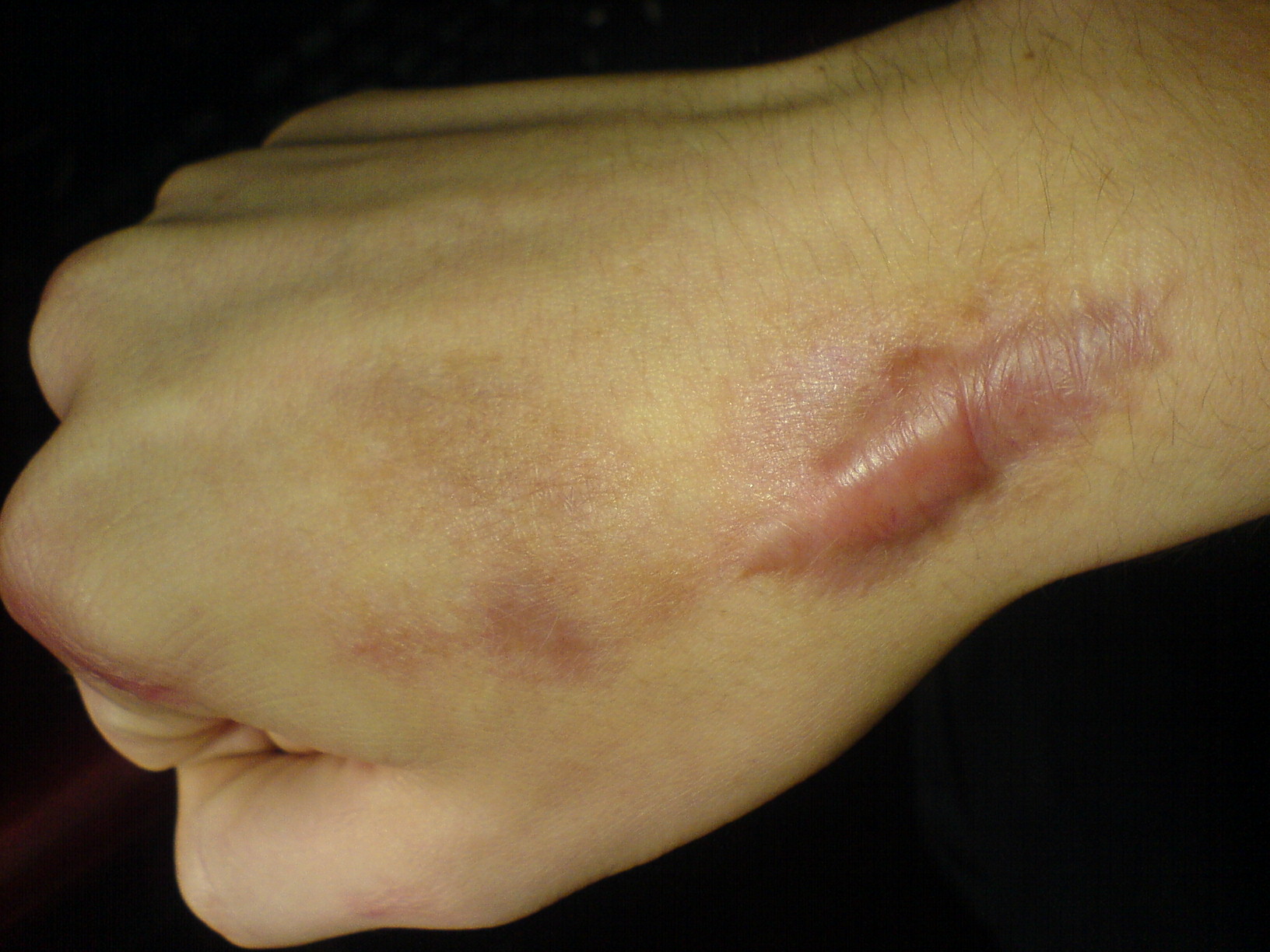 Hypertrophic and Keloid Scars
Hypertrophic scars (HSs) and keloids are raised, red, and rigid (3 Rs) scars that develop during cutaneous wound healing and are characterized by a local abnormal proliferation of fibroblasts with over-production of collagen. Over-expression of growth factors, such as transforming growth factor-beta (TGF-β), and decreased production of molecules that promote matrix breakdown, such as matrix metalloproteinases, appear to be involved in the etiology in both an HS and a keloid. Genetics has a strong influence on keloid predisposition, with people of darker skin complexion having a higher predisposition. Keloids occur mostly on the upper torso, shoulders, head, and neck. Treatment of keloids is often ineffective, but moderate success can be achieved with surgical excision, especially when combined with adjuvant non-surgical management.
read more 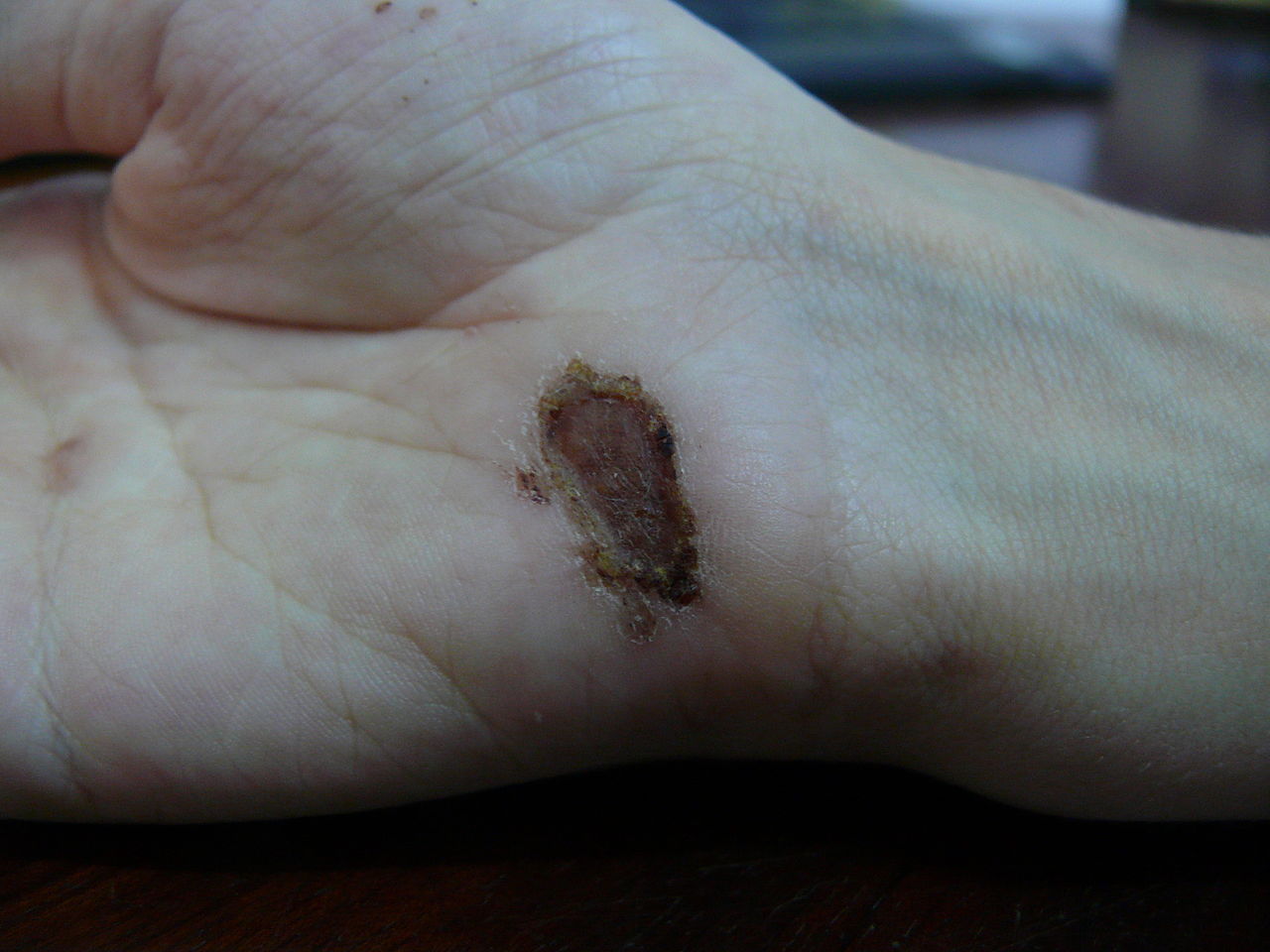 00:01 Okay, so we have come a long way from that original injury. 00:06 And then the recruitment of neutrophils and all the things they do. 00:09 And then through all the terrific healing that's going on because of macrophages. 00:14 But healing, not only is it not always perfect, but it also sometimes has complications. 00:22 So let's talk about those. 00:24 Here's a roadmap. You've been a long way. 00:27 We're on chapter six, complications of healing. 00:32 Here is a rather nasty looking thing. 00:34 It's almost hard to recognize what it is other than through the title. 00:38 Center in that is a heart. 00:40 And this is a heart that had a lot of inflammation, probably due to some sort of infection, or other injury on the surface of the heart and involving the pericardium. 00:51 That injury causes inflammation, which then causes vascular permeability and leakiness. 00:58 And we get all kinds of fibrin, fibrinous, deposition around the surface of the heart. 01:04 And this will be one of those exudates that we need to organize. 01:09 And when we do that, there'll be a complication. 01:11 So clearly, the heart that we're looking at, didn't make it through the initial infection. 01:17 But on the next slide, we're gonna see what happens when you do make it through the initial infection. 01:22 So this heart had also, it's cut in a different way. 01:26 But this heart had also been subject to a fibrinous pericarditis in the past. 01:31 In this case, it was because of prior surgery. 01:34 So it's another mechanism besides infection. 01:36 And that prior surgery led to exudates that were on the surface of the heart. 01:43 Patient survived, went about their business, but that exudate got organized because of the standard inflammatory responses we've been talking about to form a scar around the heart. 01:53 And then that scar, that white fibrous band all the way around the heart underwent constriction, because we've talked about remodeling of the matrix, and contraction of the wound. 02:05 But here's contraction of a big wound around a heart. 02:08 Not good, because the heart can squeeze fine. 02:11 There's nothing wrong with the muscle. 02:12 We're looking down at the top into the ventricles. 02:15 On the right hand side is the left ventricle. 02:18 On the left hand side is the right ventricle and right atrium. 02:22 The heart squeezes great. 02:23 There's nothing wrong with the heart, but the pericardium around it, that's one dense scar and the poor heart can't fill. 02:32 So this is a constrictive cardiomyopathy. 02:34 As a predictable consequence of the effects of inflammation, organize in an exudate that accumulated around this heart. 02:43 Here's another example. 02:44 This is a lung, it's a low power, photomicrograph of lung, and this is a lung that's experiencing diffuse alveolar damage. 02:53 That's the pathologic correlate to Acute Respiratory Distress Syndrome, or ARDS. 03:00 In ARDS multiple causes, but basically, we have an increased vascular leak into the airspaces of the alveoli. 03:07 And that exudate, that happens because of a variety of causes, infections, and toxins, and that sort of stuff, gives us an exudate we want to organize. 03:20 Well, gee, if we organize it in the usual fashion, we're going to make scar. 03:23 Yes. 03:24 So one of the consequences of severe diffuse alveolar damage, or ARDS is that we get scarring. 03:31 This is also along, but further along, where we've organized that diffuse alveolar damage and we now have filled up the airspaces that should be alveoli, with basically scar tissue. 03:44 This poor patient can't breathe because there's no airspace for gas exchange. 03:49 So again, a predictable consequence of chronic inflammation and healing, the body's doing what it's tended to do but this is a pretty dire complication. 04:00 Here's another one. 04:01 So this is a patient who 20 years ago had, I think it was him, had his appendix taken out. 04:09 And that appendix, no problem, and the surgeon looked around and did a very nice job. 04:15 So he didn't backup, and the guy went along his entire life for 20 years, until he presented with acute excruciating abdominal pain. 04:24 And what had happened, what had started during the original surgery for that appendix was that there was some exudate. 04:32 Manipulating in the bowel, little cutting here, a little pushing around there, you get a little bit of an exudate. 04:37 That exudate organizes the way it's supposed to. 04:41 It turns into fibrous connective tissue. 04:44 And that white band that's now near the bottom was what we call an adhesion. 04:49 And it was basically from the original surgery in the original exudate, and it was been there for 20 years, not doing any problem until the small bowel kind of got wrapped up into that, and twisted. 05:02 Turned into a knot that we call a volvulus. 05:05 And you can see the normal color of the bowel that's up in the upper right hand corner, that's kind of white tan, that's normal. 05:14 All of that kind of hemorrhagic brown necrotic looking thing? Yeah, that's actually necrotic bowel, that has been twisted on its pedicle, and we have compromised the blood supply, and it's become necrotic ischemic. 05:28 He's got dead bowel. 05:29 Because of a predictable complication of normal wound healing, 20 years ago. 05:36 So these are a variety of things that can happen as a result, just the organization of exudates.

The lecture Complications of Healing: Overview by Richard Mitchell, MD is from the course Acute and Chronic Inflammation.

Which of the following proteins is responsible for fibrinous pericarditis?

Which of the following processes is directly responsible for the formation of intra-abdominal adhesions?

Which of the following statements regarding wound healing is true?