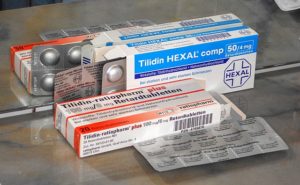 00:01 Let's move on to the class 2 drugs. So, these are beta blockers. 00:04 Now, all beta blockers have a very complex interaction with the membrane. 00:09 First of all, all beta blockers do have anti-ischemic effects. 00:13 They reduce the myocardial oxygen demand by reducing heart rate for example. 00:18 Some beta blockers also have membrane stabilizing effects at the phase 0 point of the action potential. 00:26 All of the beta blockers will also affect the slow current. So, there is going to be an action on repolarization as well. 00:34 And there is one beta blocker, it's sotalol, that has action potential prolongation, because in a way, it's acting like a class III antiarrhythmic. 00:45 Although sotalol is a beta blocker, I'm going to discuss it in the class III discussion. 00:52 So, in terms of these beta blockers, let's talk about the prototypical antiarrhythmic beta blocker, esmolol. 00:59 Now, esmolol is particularly useful because it can be given intravenously and it's quite fast acting and relatively short acting. 01:07 It reduces the cyclic AMP levels. It reduces the sodium current and it reduces the calcium current. 01:14 The actions are specific to the atrioventricular node. 01:18 In terms of the ECG changes with these medications, you often will see a prolongation of the PR interval, which represents the conduction through the AV node being delayed. 01:30 We call that dromotropy. So, esmolol and other beta blockers are negative dromotropic agents. 01:37 The word "dromos" refers to the Greek god or the patron god of racing. 01:43 So, dromos means race or fast. So, if you have negative dromotropy, you have a slower speed of conduction.

Which of the following statements regarding beta blockers is most accurate?

Which of the following statements best describes esmolol?