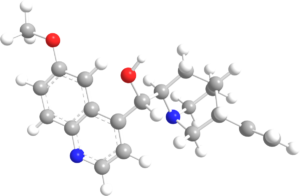 00:01 Let's take a look at how the action potential conducts electricity in and on the cell membrane. 00:08 The first thing that happens in the first part of the action potential is sodium channel movement followed by calcium channel movement. The sodium channel blockers work on the movement of sodium across the cell. 00:20 We call this phase 0. 00:23 Another way of describing this is what we call the upstroke of the action potential. 00:28 That's where the action potential is moving up. 00:32 Now, the group 1 antiarrhythmics do have varying effects on the third phase of the action potential which happens later. 00:40 So, these drugs are what we call "state dependant". So the action of the drug depends on what state the membrane is at. 00:50 If the membrane is depolarized, it will have one type of action. If it's not depolarized, it will have another type of action. 00:57 We divide up the group 1 antiarrhytmics into 3 different groups. Let's talk about group 1A. 01:04 So, group 1A includes drugs like procainamide. Procainamide prolongs the upstroke of the action potential by slowing down or blocking the sodium channel. 01:16 So you can see now that instead of sodium going directly in in a straight line, we've illustrated as if it's going in in a wavy line. That just shows that the sodium movement is either impaired or slowed. 01:29 The action potential time is prolonged. So, have a look at the red line here, you can see that the total length or the ERP is prolonged. Now these agents, and this particular group of agents will affect the atria, the purkinje fibres, and the ventricular tissues. 01:49 We use these drugs in all types of dysrrhythmias, especially during an acute myocardial infarction. 01:56 The group 1A drugs are also proarrhythmic. That means that they can actually cause an arrhythmia. 02:03 A classical example of that type of arrhythmia is Torsade de pointes. 02:07 Hyperkalemia exacerbates cardiac toxicity of these group 1 drugs. 02:13 The treatment of overdose is usually sodium lactate. That's in the case of an arrhythmia. 02:19 Or we can use pressor sympathomimetics in the case of changes in blood pressure. 02:26 Let's talk about the group 1B antiarrhythmics. The classical drug here is lidocaine. 02:32 We kind of talked about lidocaine before when we were talking about our local anesthetic lecture. 02:37 And yes, it is the same drug. 02:40 It's selective to ischemic or depolarized cells. It has little effect on atrial tissue or normal tissues, and it has little effect on the electrocardiogram. So you really can't tell if a person has been taking lidocaine just based on the ECG. 02:56 However, when you look at the action potential which is different than the ECG, you can see that there's a slight change, because it may shorten the action potential duration. 03:07 Now, in terms of uses of the group B drugs, we're using them to treat certain types of arrhythmia. 03:14 Lidocaine is useful in ischemic arrhythmia and ventricular arrhythmias, so we often find lidocaine as our first or second line choice in advanced cardiac life support. 03:24 And mexiletine is used for chronic arrhythmia and neuropathic pain. 03:30 The toxicity of these drugs. Most antiarrhytmic drugs are proarrhythmic and this is no exception. 03:36 It may actually precipitate an arrhythmia so you have to be very careful, and you have to monitor these patients. 03:41 Remember once again, that hyperkalemia increases the toxicity of the grade 1B drugs as well as the grade 1A drugs. 03:50 Let's move on to the group 1C antiarrhythmics. There's really only one drug in this drug class that's of any importance, and that's flecainide. Now, flecainide will prolong the upstroke of the action potential. 04:04 It doesn't really have an effect on the action potential duration, so you can see on the blue line, that really the duration of the action potential is about the same. 04:14 It does not have an effect on ventricular action potentials. Now, what it will do is it will increase the QRS duration of the ECG, but it will not have an effect on the QT interval. It can slow conduction in atrial and ventricular cells. 04:32 Uses of this medication include atrial and ventricular arrhythmia, and right now it's only approved for refractory arrhythmia like superventricular tachycardia or SVT. 04:44 Toxicity. Remember that this particular drug is actually more likely than the other ones to be proarrhythmic. 04:50 And that is definitely increased with hyperkalemia, like the other two group 1 drugs.

The lecture Group 1: Sodium Channel Blockers – Antiarrhythmic Drugs by Pravin Shukle, MD is from the course Cardiovascular Pharmacology. It contains the following chapters:

What is the mechanism of action of class 1a antiarrhythmic agents?

Which of the following is not a class 1a antiarrhythmic agent?

Which of the following best describes the actions of lidocaine?

Which of the following statements regarding lidocaine is most accurate?

Which of the following agents is most likely to increase the duration of the QRS complex?

Which of the following classes of antiarrhythmic drugs are LEAST effective in atrial arrhythmias?