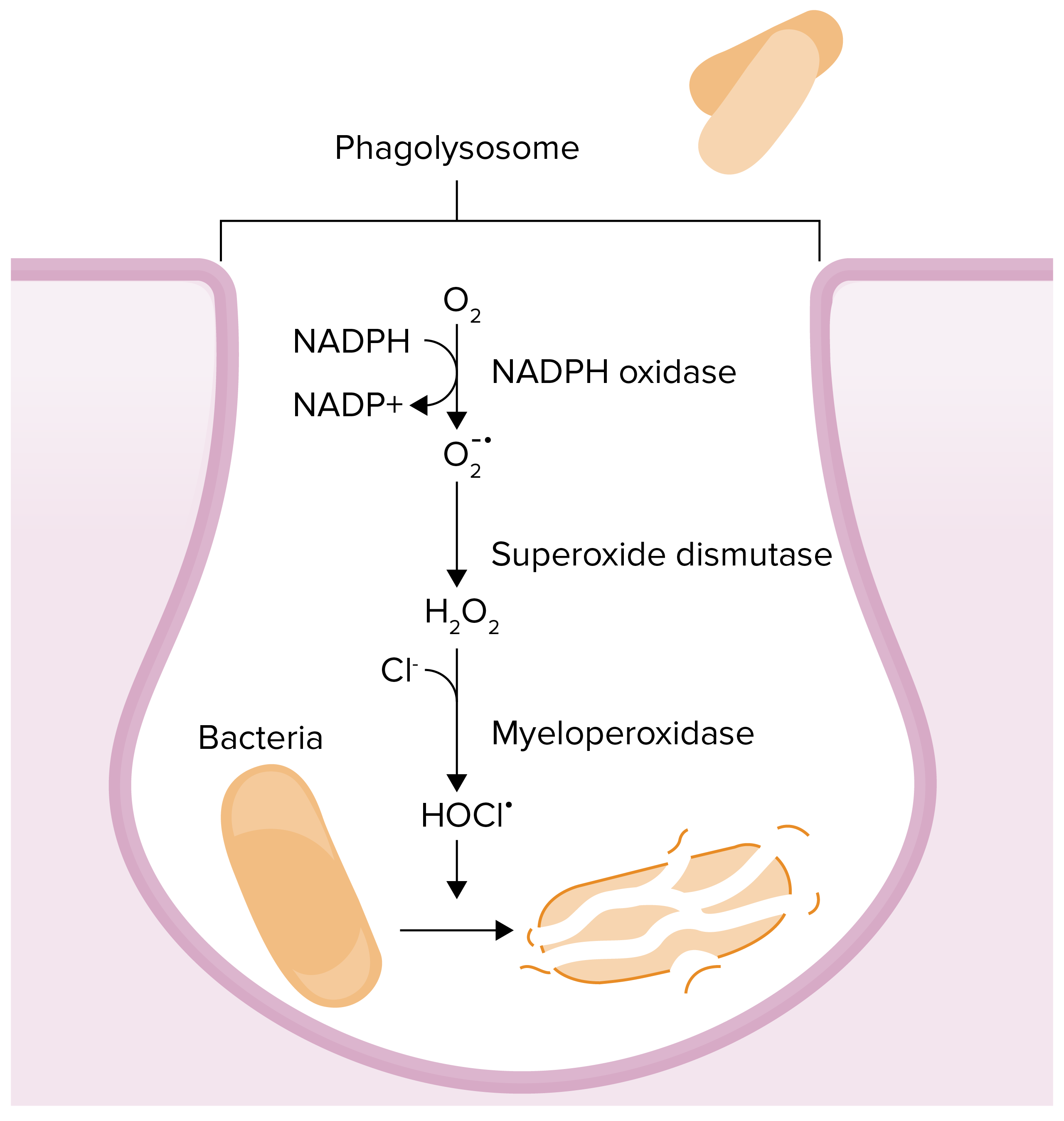 Myeloperoxidase Deficiency
Myeloperoxidase (MPO) deficiency is an inherited or acquired disorder caused by mutations in the MPO gene on chromosome 17, leading to a deficiency of MPO in neutrophils and monocytes. This deficiency particularly impairs destruction of pathogens in phagolysosomes. While the majority of patients are asymptomatic and do not suffer from an increased frequency of infections, a minority (particularly  diabetic patients) can develop serious fungal infections. Histochemical staining of neutrophils for MPO can provide the diagnosis. There is no specific management for MPO deficiency, and prophylactic antibiotics are not indicated.
read more

Chronic Granulomatous Disease
Chronic granulomatous disease (CGD), as the name implies, is a chronic disorder that is characterized by granuloma formation. This disorder is a consequence of defective phagocytic cells that are unable to produce bactericidal superoxide because of a defect in nicotinamide adenine dinucleotide phosphate (NADPH), the oxidase responsible for the respiratory burst in phagocytic leukocytes. The diagnosis is made by testing neutrophil function for superoxide production. Patients with CGD are at increased risk of life-threatening infections with fungi and catalase-positive bacteria. Inflammatory complications such as CGD colitis are also possible. The introduction of antimicrobial prophylaxis and the use of azole antifungals has increased the overall life expectancy of these patients.
read more
Load more
Share
Ask Questions
Take Notes
Download Slides
Report Mistake
Comments
show all Show less
My Notes
show all Show less
Learning Material 2
show all Show less
Report mistake
Transcript
0 of 0

00:01 Comparison chart between chronic granulomatous disease and myeloperoxidase. We'll take a look at two different enzymes. 00:08 And what may then happen when there is a deficiency to begin with. Chronic granulomatous disease, what enzyme are you missing please? NADPH oxidase only. The only cell to be then damaged or injured would be the functioning of a neutrophil. 00:28 Your patient is now catalase positive susceptible. You know why already. Because now with NADPH oxidase deficiency. 00:39 In CGD you do not have deficiency of myeloperoxidase. So if you have a catalase negative organism such as Strep, it's feeding us. 00:49 Let's say that I have CGD, it would be feeding me the hydrogen peroxide and myeloperoxidase will kill the Strep. 00:58 But a Staph which is catalase positive, even if it's feeding me to hydrogen peroxide, because the bacteria contains catalase it won't get killed. X-linked recessive for CGD. Myeloperoxidase, autosomal recessive. And CGD, absence of your NADPH oxidase, in myeloperoxidase deficiency, only deficiency of myeloperoxidase. Let me ask you something here. Which one of these conditions is more dangerous. NADPH oxidase deficiency or myeloperoxidase deficiency. You must know, clinically significant, NADPH oxidase deficiency, CGD, much more dangerous clinically than this myeloperoxidase deficiency. Respiratory burst, remember. 01:52 NADPH oxidase is the first enzyme that will take the oxygen and turn into what? Superoxide. This is called a respiratory burst. 02:01 This is not happening in CGD. What about hydrogen peroxide? It is absent in CGD but it's present in myeloperoxidase deficiency. 02:12 And in which one of this condition would there be loss of bleach or hypochlorous acid? In both. Meaning to say that if NADPH oxidase is not present, that means that you would not be then properly, you can't form hydrogen peroxide. And so therefore you can't have bleach. 02:30 If there is myeloperoxidase deficiency, yes there is going to be hydrogen peroxide, but then once again you don't have the enzyme to then form your hypochlorous acid, HOCL, bleach. We'll go through integrated arachidonic acid pathway here. And the reason that I bring this to you attention, our focus with inflammation is going to be only with those mediators dealing with arachidonic acid. 02:58 I'm not going to walk you through every single arachidonic acid issue but in red what you are seing here are important clinical points from pharmacology that you want to be very comfortable with. So let's identify here, in arachidonic acid pathway, which mediators that we will be paying attention to. These include LTB4, Leukotriene B4 primarily. 03:22 Others would include well what you are seing here. There are two pathways from arachidonic acid if you remember your phospholipase A2. Quickly, phospholipase A2 is inhibited by corticosteroids. Stimulated by calcium. And you knew that already because of irreversible injury. We have the COX pathway, cyclo-oxygenase. Here it's inhibited irreversibly by aspirin, NSAIDs. And then we'll go down to our PGH2 and prostacyclin. Here you are thinking about the following. Endothelium in green and you have prostacyclin. It is important for you to know that. Prostacyclin is going to be responsible for quite a bit of vasodilation. Keep that in mind. That is important. Remember in inflammation what is the state of your blood vessel? Inflammed. 04:11 You want that to be dilated. Make sure you have that in mind. Now you have others here that you should know about, PGE2 responsible for fever and PGE2 when it comes to inflammation is going to be also dolor, which is what? Pain. 04:26 So two major factors responsible for pain is going to be bradykinin and we also have our PGE2. 04:34 Next, let's move on to LOX pathway please. Our LOX pathway is then going to form our most important chemotactic factor, leukotriene B4. The rest of this C,D,E 4 are then called what's known as your slow reacting substances when a anaphylaxis. 04:55 In other words, CDE4 will be responsible for bronchoconstriction. Keep that separate from B4 please. B4 should be important for us in inflammation in this section because of chemotaxis. When it comes to inhibiting the LOX pathway, then you should be thinking about silutin. What if you want to block the receptor. It's called montelukast or zafirlukast. In the meantime, at some point, when you have gotten into hemodynamics you will be dealing with thromboxane quite a bit which is not our topic today or in this section. Our topic in this section is strictly neutrophil, but if you're dealing with hemodynamics, and you're dealing with platelets then thromboxane will be responsible for, good, platelet aggregation. Okay. 05:46 Hence, aspirin and NSAIDs by inhibiting COX pathway, inhibits thromboxane and therefore called a 'blood thinner'. 05:57 A nicer overview of arachidonic acid. All the different things that you need to make sure that you know from pharmacology. 06:03 And those substances that I have extracted here specifically for inflammation including leukotriene B4 and prostacyclin. 06:13 Bradykinin, pain. And if you have a patient who has high blood pressure, hypertension, and you're administering ACE inhibitor there is every possibility that the patient now increases levels of bradykinin resulting in dry cough.

Which of the following is seen with MPO deficiency?

Which of the following is characteristic of chronic granulomatous disease?

Which of the following prostaglandins is responsible for the pain response in acute inflammation?