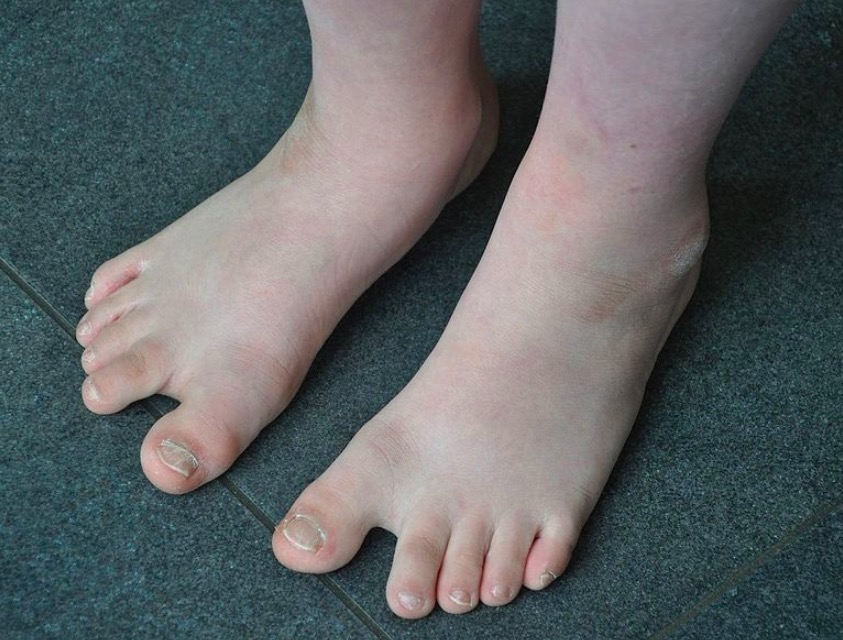 Down Syndrome
Down syndrome, or trisomy 21, is the most common chromosomal aberration and the most frequent genetic cause of mental retardation. Both boys and girls are affected and have characteristic craniofacial and musculoskeletal features, as well as multiple medical anomalies involving the cardiac, gastrointestinal, ocular, and auditory systems. Characteristic traits include upslanting, almond-shaped eyes with skin covering the inner aspects, broad flattened nasal bridge, small rounded ears, and small mouth with large tongue. Screening for Down syndrome occurs during the 1st and 2nd trimesters of pregnancy and includes both blood tests and prenatal ultrasonography. Ultimately, karyotyping confirms diagnosis in the prenatal or postnatal period. There is no cure for Down syndrome. Treatment is based on the clinical manifestations present; it includes a strong support system and early intervention programs to help with education and development.
read more
Load more
Share
Ask Questions
Take Notes
Download Slides
Report Mistake
Comments
show all Show less
My Notes
show all Show less
Learning Material 2
show all Show less
Report mistake
Transcript
0 of 0

00:01 We will now examine how germ cells develop and can occasionally have problems resulting from abnormalities present in the chromosomes, either within the chromosomes or due to difficulty partitioning the chromosomes to the appropriate daughter cell. 00:14 Now, given the wade and the rapidity with which cells are dividing, both in mitosis and meiosis, it's fairly amazing that we don't have more errors occur than we do, but generally the process of mitosis and meiosis is very faithful it results in a very few errors. 00:31 However, errors do occur and meiosis can cause chromosomal abnormalities in the daughter cells that are then used to produce new life and that can lead to various problems. 00:43 It's estimated that around 50% of all conceptions are lost and 50% of those losses, so 25 over all, are lost due to chromosomal abnormalities in the germ cells. 00:54 Chromosomal defects of some sort account for roughly 7% of all major birth deficits with 8% being account for by the mutations of individual genes within those chromosomes. 01:06 Now, any human cell is gonna contain either 46 or 23 chromosomes depending on whether it's a cell undergoing mitosis or a germ cell which is going to be able to combine with another cell to create a diploid cell. 01:20 The normal state of being for any cell is going to be euploidy, having 46 or 23 chromosomes. 01:29 Any variation on that number creates a state called aneuploidy and that can cause birth defects or spontaneous abortion if it's inherited in a germ cell. 01:38 Here we can see an example where a nondisjunction event has occurred during meiosis one which leaves some daughter cells with no chromosomes and the resulting daughter cells on the opposite side having two copies on a single chromosome each. 01:55 This aneuploidy can occur during nondisjunction event at either meiosis one or two and tends to result in a chromosome with either too many or too few chromosomes of one type. 02:07 In the end, we have either trisomy or the affected individual have three copies of a chromosome or monosomy, one copy. 02:16 Nondisjunction events, again, can occur meiosis one or two but when these cells combine with another germ cell, we can have it proceed to a clinically detectable state as the embryo and fetus develops. 02:30 Trisomy 21, most commonly known as Down syndrome, is the most common trisomy. 02:35 If we take a look at the karyotype shown on the screen here, we can see that there are three copies of chromosome 21 present, when normally we'd expect there only to be two. 02:45 People with this condition have varying degrees of mental capacity, ranging from profoundly affected and unable to function to nearly full social function with some degree of accommodation. 02:55 People with Down syndrome typically have delays in growth, some immune system delays and flattened facial features, as well as what's known as epicanthal fold over the top of the eye and the Simian crease that goes all the way across the front of the palm. 03:11 The risk of Trisomy 21 and any nondisjunction event for that matter increases with maternal age. 03:18 So here at the bottom of the screen we can see two children who are born at the same time, twins, but the one on the right is displaying the typical appearance of someone with Down syndrome, particularly the epicanthal folds right over the eyes. 03:31 Trisomy 18 is called Edwards syndrome and it is the second most common trisomy. 03:37 Infants with these are going to have several abnormalities. 03:40 Heart and kidney problems, omphalocele, where contents of the gut have herniated into the umbilical cord, micrognathia, small mouth and microcephalic skulls, with a skull that's actually smaller than we'd expect, sometimes as much as 2 to 3 standard deviations below the expected norm. 04:00 The second and fifth fingers tend to overlap which is very interesting and very distinctive for trisomy 18. 04:06 If you look at the picture you can see how the second and fifth digits are wrapping over the top of digits three and four. 04:14 80% of infants with these are going to pass away within a year, with 13% living to ten years of age so it does have a significant morbidity associated with it. 04:24 Trisomy 13 or Patau syndrome is another trisomy that is not as severe as others in that the affected individual can make it to birth, but children with this condition will have a variety of problems including again, heart and kidney deficiencies, cleft palate, holoprosencephaly where there's failure of midline structures of the face to separate fully sometimes causing cyclopia, single or fused eyes and a proboscis on the forehead. 04:51 They can also experience polydactyly with too many fingers, muscle weakness and varying degrees of mental disability.

The lecture Chromosomal Abnormalities: Trisomy 21, Trisomy 18 and Trisomy 13 by Peter Ward, PhD is from the course Conception, Implantation and Fetal Development. It contains the following chapters:

If a human somatic cell contains greater than or less than 46 chromosomes, what term is used to describe the numerical abnormality?

If aneuploidy results from germ cells having three sets of the same chromosome (trisomy) or one set (monosomy), what process leads to these aberrations?

Which chromosomal abnormality is most likely in a patient with immune system problems, flattened facial features, 'Simian crease' on the palm, and epicanthal folds of the eyes?