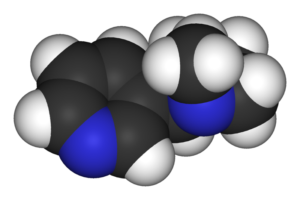 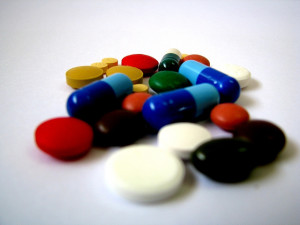 00:01 Let's talk about a special topic which is nicotine. Nicotine actually can cause cholinomimetic toxicity. First time smokers when you first start smoking can often become nauseous and that's because of excitation of nicotine receptors in the brain. And that's very high level of nicotine excitation. Sometimes with occasional smokers of cigars they will also get nauseous when they smoke especially a large stoge. What about malathion and parathion. Malathion and parathion are very common herbicides and pesticides. These are prodrugs and they are metabolized to an active form in insects but not humans. So generally speaking it does'nt affect humans but if you ingest it as in drink it you can sometimes have significant side effects. We're gonna speak more malathion and parathion in our toxicology lectures. What about overdoses with certain types of drugs. Pyridostigmine, neostigmine and physostigmine which is pictured here are typical drugs that can cause a parasympathetic crisis. Let's talk about terrorism. In 1995, there is an attack in a subway in Tokyo. Members of a cult released sarin gas into the Tokyo subway system and it caused a large number of deaths. Now a few people survived and the reason why they survived was because the physicians who were working at the hospitals were alert enough to realise that these patients had acetylcholine toxicity. Now, sarin is an organophosphate. It is very very potent. Death can occur within minutes. And they have death because of asphyxia. They can also develop permanent neurological damage. Now the antidote to sarin or any drug that increases acetylcholine activity excessively is atropine. Now atropine is available in pretty much every single crash cart. And it's probably the least used drug in the crash cart. So it's usually the one that is kind of at the back of the drawer. But if you see a patient who you suspect has been poisoned by something like sarin and you have a lot of people coming in at the same time, think about using atropine. So what do these patients look like? They look exactly like those patients who have pesticide toxicity. So pesticide ingestion from say malathion or parathion or even an excess dosage of the medicines pyridostigmine, neostigmine and physostigmine. Now let's compare a cholinergic crisis or a parasympathetic crisis to a disease called myasthenia gravis and myasthenia crisis. Now in the case of myasthenia, there is destruction of the acetylcholine receptor. In the case of cholinergic crisis there is excess acetylcholine. For example, when you are exposed to sarin gas. In myasthenia crisis, you have an increase in heart rate and blood pressure, and bowel and bladder incontinence. In cholinergic crisis, there is a decrease in blood pressure and you have abdominal cramps, nausea, vomiting and diarrhoea. In myasthenic crisis they're very weak, so they will an absent cough reflex and an absent swallow reflex. One of the tricks we sometimes do is we give them a little bit of water in a spoon and put them in the mouth and see if they swallow and responds to it. A cholinergic crisis is blurred vision, pallor and facial muscle twitching. In terms of the effect of edrophonium, edrophonium will give temporary relief in myasthenic crisis. Remember that edrophonium is an acetylcholinesterase inhibitor so it actually causes more acetylcholine in the synaptic cleft which does'nt necessarily overcome the lack of receptors in the post synaptic nerve, but at least it helps stimulate more of the receptors because of increased concentration. In cholinergic crisis, edrophonium has no effect because the receptors are already saturated. However, edrophonium given to a person who is'nt in full blown cholinergic crisis can actually precipitate a cholinergic crisis because now you have really done it and caused an increase in ACH levels. Atropine will not help myasthenic crisis. But in cholinergic crisis, atropine will improve symptoms. So there you have it. Those are very complicated especially the differentiation of myasthenic versus cholinergic crisis. We are going to have questions on them so that you can review them in detail. Thank you very much.

The lecture Cholinergic Toxicity, Myasthenic Crisis and Cholinergic Crisis by Pravin Shukle, MD is from the course ANS - Pharmacology.

During the sarin attack in Tokyo in 1995, the most common cause of death was…?

What is the antidote for activating cholinomimetics?

Which drug provides temporary relief during a myasthenic crisis?

Which of the following signs/symptoms would be LEAST likely in a cholinergic crisis such as sarin poisoning?