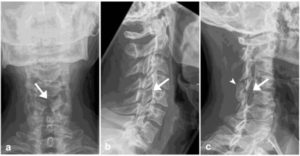 00:01 Hello. Now, we’re gonna talk about cervical spine trauma which is a very important topic for every emergency physician to understand. 00:09 Cervical spine injury is very, very common. 00:12 In the United States, there’s more than a million cases a year of whiplash injuries or neck pain following motor vehicle collisions. 00:21 Major cervical spine injury though is actually quite rare, so of all the many, many, many C-spine images that we take from patients who have neck pain after trauma, fewer than 2% of those actually show fracture, and there’s only 10.000 deaths or cases of quadriplegia each year related to spine trauma. 00:40 The real difficulty though is that on clinical grounds, it’s very difficult to predict who among the many patients with neck pain following trauma actually have an injury and who doesn’t. 00:52 The C-spine is a particularly important part of the body anatomically because it’s very vulnerable to injury. 00:59 It’s highly mobile, unlike the lower spine which is really tethered into the axial skeleton quite firmly, the upper C-spine is able to move around very easily. 01:10 It’s got minimal support and it’s subject to a variety of different injury mechanisms. 01:17 So in particular, rapid decelerations which throw the head forward, whiplash injuries which throw the neck backwards, there’s lots of different ways that the spine can be injured and the neck is the most vulnerable to all of those. 01:33 And the complications of serious injury really are devastating. 01:36 The entire motor functions for the body are really contained in the cervical spine and when you injure it, the complications include quadriplegia and death. 01:47 So, this is a really, really big deal and something very important for us to be able to identify reliably in the Emergency Department. 01:55 So when we think about the anatomy of the C-spine, the alignment of the spine is absolutely crucial. 02:01 When you look at images of the C-spine, there are always three lines you should be looking for. 02:06 The anterior vertebral contour line which is along the anterior aspect of the vertebral bodies. 02:12 The posterior vertebral contour line which is along the posterior aspect of the vertebral bodies. 02:19 And the spinal laminar line which goes along the facet joints and delineates the space where the spinal cord actually is. 02:29 Disruption of any of these three lines should indicate an unstable injury. 02:33 So if you don’t see good, smooth alignment along each of these three planes, you should be concerned that the bones have moved relative to one another and that the spine is actually unstable. 02:45 There are a number of different ligaments in the spine that hold the bones in correct anatomic orientation relative to one another, and you don’t need to necessarily memorize every single ligament but you should recognize that when the spine is not aligned properly, that can represent one of two things. 03:02 It can either represent disruption of one of the ligaments themselves which has allowed the bones to pull apart relative to one another, or can represent a fracture where the insertion point of the ligament on the bone has been broken off, again allowing the bone to move in a way that it wouldn’t be able to if it was properly tethered in place by the ligament. 03:25 Cervical spine immobilization is commonly used in the pre-hospital setting to help protect people from the sequelae of spinal injury. 03:34 Now, you’ve almost certainly by this point in your training seen patients come into the Emergency Department wearing cervical spine collars. 03:43 This has really become the standard of care in pre-hospital medicine and has been used for many, many years at this point. 03:49 And the theory behind it is, hey, it’s a relatively benign intervention, it’s not gonna hurt anybody to put them in a cervical collar, and you might potentially prevent neurologic complications in the event the patient has an undiagnosed unstable injury. 04:06 However, how benign this intervention actually is has come into question in recent years and it’s thought that prolonged cervical spine immobilization can actually lead to adverse outcomes down the line. 04:18 So it might not be as harmless as we had imagined. 04:21 On the downside of spinal immobilization, there’s actually no evidence whatsoever from a scientific standpoint that spinal immobilization improves clinical outcomes for patients, and the fact that we’ve done it forever doesn’t mean it’s really the right thing to do. 04:37 There may in fact be adverse consequences to cervical spine immobilization and it might be time to start thinking critically about whether or not this time honored practice is something we should be continuing in the current climate of medicine. 04:51 One really important point however because we’re all gonna see patients who are brought in with cervical collars is that the simple fact that they come in with a cervical collar does not mean their neck is broken and it does not mean that they necessarily need imaging. 05:06 It’s up to us as clinicians to decide whether the patient is low risk or high risk based on our clinical assessment and decide whether we feel imaging is warranted.

Which of the following statements regarding the epidemiology of spine injury is INCORRECT?

Which of the following statements about the cervical spine is NOT true?

Which of the following statements regarding cervical spine immobilization is NOT true?

Very much to the point without any fluff. Help guide thinking process in the ED.

Very much to the point without any fluff. Help guide thinking process in the ED.