Cells of the Epidermis 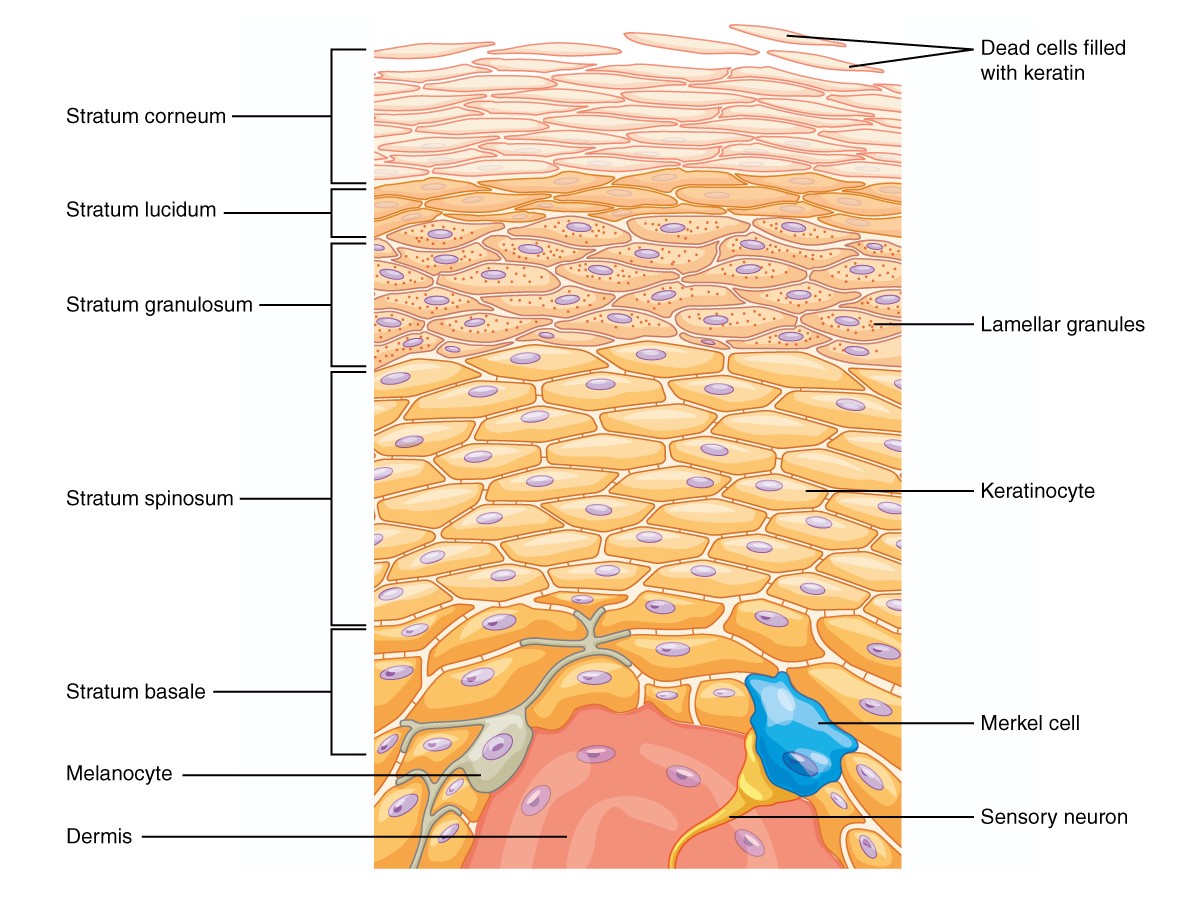 Structure and Function of the Skin
The skin, also referred to as the integumentary system, is the largest organ of the body. The skin is primarily composed of the epidermis (outer layer) and dermis (deep layer). The epidermis is primarily composed of keratinocytes that undergo rapid turnover, while the dermis contains dense layers of connective tissue. The skin is composed of surface epithelium, exocrine components, connective tissue, muscles, and nerves. The primary role of the skin is to serve as a protective barrier between the internal body and the external environment; it also protects the body from excessive fluid loss.
read more
Load more
Share
Ask Questions
Take Notes
Download Slides
Report Mistake
Comments
show all Show less
My Notes
show all Show less
Learning Material 2
show all Show less
Report mistake
Transcript
0 of 0

00:00 Let us look now in more detail at the cells that make up the epidermis. We've already looked at the different layers of the epidermis, which reflect the process of keratinization and our waterproofing role of skin, but let us look at what cells are present and what they do. First of all, we have actually mentioned the keratinocyte before. It is a cell as you see here stained with a special stain, that shows you really the accumulation of keratin within the cell. It is predominantly the cell type in the epidermis. It is the important cell layer that is in contact with the external environment. And as I have told you in a previous component in this lecture, its main job is to produce the waterproofing agent keratin and those insoluble proteins and lipids on the surface layer of the stratum corneum. 01:13 Let us look at the melanocyte. The melanocyte is the cell in the epidermis that produces the pigment melanin. And melanin is very important because it protects the layers of the stratum basale, the cells in the stratum basale, the nuclei in the cells and also the nuclei in the layer above the stratum spinosum, it protects those nuclei from excessive ultraviolet radiation. 01:45 And the process of creating melanin is a very very rather long process, rather complicated physiological process, ao I am not going to describe it here. But what I want to emphasize is that when the melanin is produced by the melanocyte, it is donated to the surrounding keratinocytes. The surrounding keratinocytes actually ingest the melanin pigment by endocytosis. 02:18 And then the melanin is transported and surrounds the nucleus. Here is an image of skin. 02:26 It is actually thin skin. So have a look now and recall the section of the skin that I've showed earlier. The layers are much thinner. The keratin layer is much thinner. 02:42 So this really does describe the difference between thick skin and thin skin that I've mentioned before purely being really the difference in the thickness of the epidermis. But what I want you to concentrate on here is that dark brown pigment you see in the basal layers of the epidermis of this thin skin. That is melanin and if you look very very carefully, you will notice that the bulk of the melanin is concentrated above the nucleus between the exterior surface and the nucleus, again shielding those nuclei from excessive ultraviolet radiation. Those nuclei I remember are in cells that are dividing constantly. 03:31 So you don't want that excessive ultraviolet radiation damaging the DNA during that division process, during the process of mitosis. Let us now move on to the Langerhans cell. It is originated from bone marrow. It moves into skin from bone marrow. It is a dendritic cell and what I mean by dendritic cell is that it has long processes. You see these processes in both these images. They are antigen-presenting cells and they live mostly in the stratum spinosum. And have a look at the image on the right, the one with the pink background to it. 04:16 Have a look carefully into that pink background, you can just make out the profiles of circular nuclei. 04:23 They belong to the nuclei of the keratinocytes of the stratum spinosum. These cells as you can see here not only have long processes, but they also hold hands with each other. 04:39 These processes are joined together from one cell to another. They are linked together. 04:48 Now I use the analogy that is like chicken wire. it is like the wire of the fins and that is what these Langerhans cells or dendritic cells actually create in the epidermis, a whole layer, if you like, of chicken like wire cell structure. And if you are an invading pathogen, trying to get through the epidermis to underlying connective tissue and therefore the rest of the body, its almost impossible to pass through that epidermis and not come into contact with on of these cell processes of these dendritic cells, these antigen-presenting cells. And when a foreign component or bacteria or an antigen comes in contact with the cell processes, the antigen presenting cells then ingests that antigen, processes it and then puts it on the surface of the cell and that cell then leaves the epidermis. The antigen presenting cell leaves the epidermis, and travels to a nearby lymph node. And there it puts a little flag up on the surface, and alerts T-cells and other cells of the immune system that then recognizes antigen and mount an immune response against it to help protect their body. And we'll learn about that in more detail in a later lecture. 06:23 Another cell type is the Merkel cell. It is also a dendritic cell meaning it has long processes extending throughout the cells, throughout the layers of the epidermis. These cells are hard to see. They are very difficult to see and they tend to be situated at the very base of the epidermis. They are mechanoreceptors. Well, skin is also a very large sensory receptor organ.

The lecture Cells of the Epidermis by Geoffrey Meyer, PhD is from the course Epithelial Tissue.

Which of the following cells is NOT found within the skin epidermis?

Which of the following cells produces melanin?

Langerhans cells are most prominent in which layer of the epidermis?

Which cell is the predominant cell type in the epidermis?

Author of lecture Cells of the Epidermis

this article handles the explanation for skin layers; which I find as the hardest of the topics, in a well organised and logically acceptable building. It is really interesting to read. It summarizes the topic but without the loss of any crucial information. Also, the use of well-labelled pictures and microscopic slides is a plus and catalyse the understanding. I would recommend this to my premedical colleagues.

this article handles the explanation for skin layers; which I find as the hardest of the topics, in a well organised and logically acceptable building. It is really interesting to read. It summarizes the topic but without the loss of any crucial information. Also, the use of well-labelled pictures and microscopic slides is a plus and catalyse the understanding. I would recommend this to my premedical colleagues.