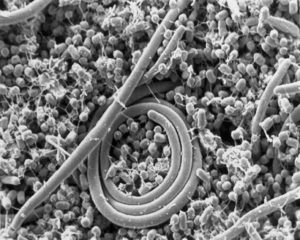 Protein Movement and Cell Signaling
Proteins are important biomolecules because they serve a number of functions essential to metabolism. Discussed in this article are the different functions of proteins in the biological system. Specifically, the article discusses proteins and their structural functions. Another function given emphasis is the use of proteins in communication and signaling. Proteins and their role in movement and mobility are also discussed in this article.
read more
Load more
Share
Ask Questions
Take Notes
Download Slides
Report Mistake
Comments
show all Show less
My Notes
show all Show less
Learning Material 2
show all Show less
Report mistake
Transcript
0 of 0

00:01 Extracellular and intracellular signaling. 00:05 We’ll discuss how cells speak with each other and deliver communique. 00:10 This could be in close proximity or those that are far away in the body. 00:15 Also, cells need to communicate vital information within the cell. 00:20 And how do they do that? These will be covered within. 00:28 There are many modes of communication. 00:31 You can come up with a lot of these on your own. 00:33 Some of them are personal in nature such as a handshake, other ones involve things like a delivered package or envelope, or even on the internet you can communicate very easily with a number of friends at the same time. 00:48 How do these communique work? Well, one of the things to think about with the body is what modes of communication does it have. 00:56 One of the more vital ones are endocrine control. 01:00 Here, you release a signaling molecule or a hormone. 01:04 It travels around in the bloodstream and is delivered to certain target cells. 01:09 How do you know which cells will get the communique? The ones with the right receptors. 01:15 If you don’t have the right receptor, you won’t receive that information or that signal. 01:22 Neural signals are also very important. 01:24 Here, a neuron can signal via long projections of axons going to an axon terminal and then releasing a packet of information to the cell it’s trying to signal. 01:39 These neural signals are very powerful in that they are direct communications rather than just releasing the substance into the blood, letting it travel around throughout the body. 01:50 Here, it’s more targeted in nature. 01:54 Now, if we move to some more local control, these are signaling molecules that will signal varying cells right around a cell. 02:05 This involves passive diffusion in which a molecule is released from the signaling cell and will only be able to diffuse in the distance around it. 02:16 Which particular cells will receive the communique? It’s all based upon the receptor. 02:22 You need to have a receptor to catch that signaling molecule. 02:28 Interestingly, there are also times in which a cell will want to receive the information that it is releasing. 02:35 A good example for this, if you’re releasing signals, you would want to make sure you knew how many signals were released. 02:43 You could have a receptor on the own cell that is sending these out to get feedback about that information. 02:53 Now, besides sending a signaling molecule, you could also have direct contact with the cell next to you. 03:02 Some of the direct contacts involve things called gap junctions. 03:07 Gap junctions are these specialized tubes that allow communication between two cells like it’s not even leaving that cell. 03:17 So these tubes will communicate electrical information, sometimes its ionic information, and this will allow a propagated and coordinated response between a number of cells. 03:33 Some direct signaling can happen via paracrine mechanisms. 03:37 For these paracrine mechanisms, you have to have one cell that can move around and be able to recognize another. 03:45 So the immune system is a very good example, where you might have immune cells that can travel around and recognize other cells based upon what projections they have sticking out. 03:57 Here, it’s like a handshake, where one cell will get up to a close proximity to another and if they can recognize each other’s projections, they might be able to bind and signal each other.

The lecture Cell Signaling by Thad Wilson, PhD is from the course Membrane Physiology.

What is the most direct mode of cell-to-cell communication?

Which is the most targeted type of signal transmission?

Which of the following processes best describe paracrine signaling?

A cell may want to know how many signals have been released by itself. How does the cell know that the release is sufficient to elicit the appropriate response?

What are gap junctions?

How do immune cells communicate information?

Some points are not stated clearly enough. Overall, good presentation.

This video was easy to understand. I appreciated how everything was stated in a simple manner. This allowed me to grasp the concept without confusing me. Keep up the good work.

Some points are not stated clearly enough. Overall, good presentation.

This video was easy to understand. I appreciated how everything was stated in a simple manner. This allowed me to grasp the concept without confusing me. Keep up the good work.