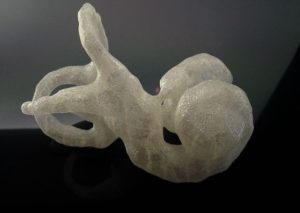 The Vestibular System-Caloric Reflex Test and Horizontal Gaze Nystagmus Test
Integration of vestibular input, vision and proprioceptive feedback is instrumental in maintaining orientation and balance of the body in both static and kinetic environment. In this article, a prelude to organization of vestibular system is followed by discussion on caloric test and control of horizontal gaze.
read more
Load more
Share
Ask Questions
Take Notes
Download Slides
Report Mistake
Comments
show all Show less
My Notes
show all Show less
Learning Material 2
show all Show less
Report mistake
Transcript
0 of 0

00:00 Welcome to this presentation on the vestibular system. The focus on this presentation is to inform you about a vestibular test, the caloric nystagmus test. I also want you to understand horizontal conjugate gaze, how that’s defined and the circuits that are involved in making sure the eyes do move together. 00:24 It’s always very, very important to dive down into clinical considerations. So we’ll be able to explore three different clinical pathologies that are associated with the vestibular system. First is a test of the vestibular system. 00:44 This is the caloric nystagmus test. This is considered a variant of the vestibulo-ocular reflex. This test involves, at the beginning, irrigation of an ear with cold water. For this slide, we’re going to irrigate the right ear with cold water. Then we’re going to see what happens to the movement of the eyes in response to this cold water irrigation. In response to irrigation of the right ear with cold water, the eyes will slowly move right as if the head is moving in the opposite direction to the left. The nystagmus component is the rapid eye movement. The rapid eye movement or nystagmus will occur then to the left. So we get slow movement of the eyes to the right and then there’s rapid eye movement back to the left. Again, this is what occurs in response to cold water irrigation of the right ear. Now, let’s do the same thing to the right ear but let’s irrigate with warm water. In response to irrigation of the right ear with warm water, the eyes will slowly move left as if the head is moving to the right. The nystagmus component, that rapid eye movement then will occur to the right, to the same side as the ear being irrigated with the warm water. Now, there is a very simple mnemonic that will help you remember the movement of nystagmus with respect to cold water irrigation versus warm water irrigation and that is COWS. Cold water will have the nystagmus movement to the opposite side, whereas warm water irrigation will have the nystagmus component occurring to the same side. 02:48 That’s the normal response. If you see an abnormal response to cold or warm ear irrigation, that will indicate vestibular lesion. Next, I want you to understand control of horizontal gaze. Horizontal gaze is the horizontal movement of both eyes in conjunction with one another. To help guide you through this control mechanism and circuitry, we’re going to look at gaze to the right. First thing to keep in mind is there is a gaze center in the frontal cortex. This will activate neurons that reside in the contralateral paramedian pontine reticular nucleus. This is PPRN. So, gaze to the right in this direction and then the contralateral PPRN becomes activated. Activation then will stimulate the abducens nucleus on the right side. So, we see that occurring in this circuit right in through here and you see the stimulation then of the abducens nucleus. In addition, the left oculomotor neurons are stimulated. We see that on this particular side right in through here. What will then happen is activation of the nerve cells that reside in the abducens nucleus will then send action potentials through the abducent nerve fibers to then cause contraction of the lateral rectus muscle which is shown here. That will move the eye to the right. 04:58 It will abduct it. Then activation of the neurons from the oculomotor nucleus will cause action potentials to travel along the nerve fibers of the oculomotor nerve. As a result of that doing that, the medial rectus will contract and cause abduction of the left eye. As a result, the left eye moves to the right by action of the medial rectus, the right eye moves to the right by action of the lateral rectus. That is the control of horizontal gaze. If there’s a lesion in this pathway, then the eyes will not move in conjunction with one another. So one eye might be fixed on the object of interest and the other eye is not in alignment with that. So you can have double vision or diplopia as a result of a lesion in this circuitry.

The lecture Caloric Test and Control of Horizontal Gaze by Craig Canby, PhD is from the course Auditory System and Vestibular System. It contains the following chapters:

If the left ear is irrigated with cold water, which of the following conditions would result?

If the right ear is irrigated with warm water, which of the following conditions would result?

If an abnormal response to caloric nystagmus testing is found, which of the following problems is indicated?

Which of the following muscles, when used in combination, cause the eyes to move horizontally to the right?

Author of lecture Caloric Test and Control of Horizontal Gaze