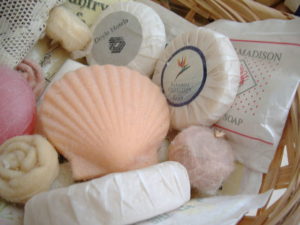 00:01 So let’s have a look at some example calculations. 00:06 What is the pH of human blood when [H+] = 4.0 × 10 to the -8 mol dm-3? Okay? This is a molar concentration. 00:16 So, let’s see how we would work this out. 00:21 First and foremost, we have our concentration of [H+]. So, relatively, all of it’s been done for us. All we need to now do is carry out the minus log to the base 10 operation on that concentration. And this gives us, as I said before, a result for... of 7.40. 00:38 That is the pH. 00:40 Bear in mind that, because we’re talking about a logarithmic operation, there are no units, okay? So, if you hear the word pH, it is merely a number. 00:52 Let’s have a look at the second question. Let’s see what would happen if we used a strong acid, hydrochloric acid, and we dissolved it up to make a solution of 0.020 M which is, as I said before, 0.02 mol dm-3. 01:09 The concentration is given for us here as 0.020. So, again, it’s relatively easy to work out because, as I said before, strong acids completely dissociated and, therefore, the concentration that you had correlates directly in this case to one equivalent of H+ for every one equivalent of HCl added. So, where we have a concentration of 0, we can do the negative log to the base 10 of that and give us a value of 1, generating a solution which, of course, is a lot more acidic than 7, which we had in the earlier question. 01:49 Now, let’s look at it in a bit more depth. What happens if we have a concentration of hydrochloric acid and the pH is found to be 3.55? How would we work out the concentration of HCl that we actually added? What we then do is we take the inverse log of -3, reversing the equation and giving us a value of 2.82 × 10 to the -4 M or the other unit for molar is mol dm-3 or moles per litre. 02:24 The inverse log is represented as the antilog or, sometimes, as 10x on your calculator. 02:31 Right. Okay. Let’s have a look at another example calculation. 02:36 The pH of a 0.015 M aqueous solution of HNO2, nitrous acid, was measured as 2.63. What is the value of Ka and what is the value of pKa? Okay. So, this requires a little bit more application because we have the concentration of HNO2, that is to say the non-dissociated, at the point of entry, HNO2, nitrous acid. 03:08 We have the pH which, as you should recall, correlates to the concentration of H+ in solution. 03:15 And now, we’re being asked to work out what is the ratio between the two. What is the ratio between starting material, the non-dissociated HNO2, and the H+ and NO2-? So, let’s first off start off by drawing this equilibrium. Remember we said before, an arrow going in one direction and in the other suggests that we have a system which is in equilibrium. That is to say at steady state, the concentrations of both sides are at a equivalent... remain the same as they did... as they would do a little later on. 03:51 So, HNO2 goes to H+ and NO2-. And so, what we need to do is put what we know about those particular components into an equation. 04:02 So, the concentrations are [H+] = [NO2-]. 04:08 We make that assumption because we’re assuming, in this case, that the majority of H+ comes from NO2... from the dissociation of HNO2 and also, because with every dissociation of one equivalent of HNO2, we must therefore get one equivalent of [H+] and one equivalent of [NO2-]. By doing this, we’re able to say that the concentration of [HNO2] actually, within our equilibrium, is given by our starting concentration of [HNO2] minus the concentration of [H+]. 04:46 If the pH that we’re measuring of the solution results in a concentration, as we can see here, of 0.00234 M, it enables us to substitute those values into the equation to determine Ka. 05:03 If we look at that a bit more closely, what we’re saying here is that the concentration of [H+] equals the concentration of [NO2-]. Therefore, the product of this [HNO2-] and [H+] must be equal to 0.002334 multiplied by itself. 05:23 The remaining amount of non-dissociated HNO2 is given by our starting concentration minus the amount which has been converted, which we know from the concentration of [H+]. Therefore, the Ka for this particular equation for this relatively weak acid is given as 4.33 × 10 to the -4. 05:46 And the pKa, as a consequence of the negative log to the base 10, is given therefore as 3.36. 05:54 Now, I want to draw your attention to the fact at the moment, we’ve only been dealing with monoprotic acids. So, that’s hydrochloric acid, nitric acid and also, as you saw, nitrous acid. 06:07 But some acids, and this is very important when you’re looking at, for example, phosphate-buffered saline solutions within medical practice and so forth, is that you can lose more than one proton. And therefore, it’s possible to have more than one Ka value for each successive deprotonation reaction. Successive removals become more difficult as the molecule, therefore, bears a greater charge and pKa values, as a consequence, get bigger. 06:38 So, let’s have a look at phosphoric acid here. 06:40 Phosphoric acid, that’s H3PO4, when reacting with water yields sodium H3O+ and a phosphate anion, hydrogen phosphate anion. And the Ka, in this first case, is actually reasonably high, 7.1 × 10 to the -3. However, successive deprotonations, until we eventually result in the loss of all hydrogens and only the phosphate remains, is a bit more difficult to achieve, giving us a Ka value or Ka3 for the third deprotonation of 4.3 × 10 to the -13. 07:18 Polyprotic acids are often used in buffer solutions. And certainly, when you’re looking at trying to mimic a plasma or the natural pH and natural salt concentrations for a given biological system, you would often use phosphates in your buffer.

C₆H₅NH₂ (an aromatic amine) is less basic than C₆H₁₃NH₂ (an aliphatic amine). Why is this so?

Complete the following statement. The measurement of OH⁻ ion concentration during pH estimation is useless because …

Which of the following statements is true?

Which of the following is NOT true about polyprotic acids?