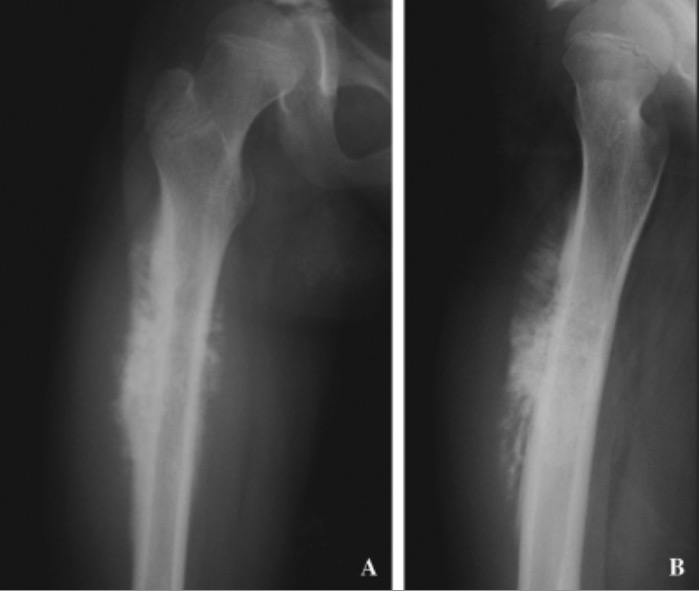 Osteosarcoma
Osteosarcoma is a primary malignant tumor of the bone characterized by the production of osteoid or immature bone by the tumor cells. The disease is most common in children and young adults and most frequently affects growth plates of the long bones, although it can involve any bone. Osteosarcoma can present with pain, swelling, and palpable mass, and sometimes with a pathologic fracture. Diagnosis is established with imaging studies and biopsy. Treatment involves systemic chemotherapy and surgical resection. Long-term survival can be expected with appropriate treatment in the absence of macrometastatic disease.
read more
Load more
Share
Ask Questions
Take Notes
Download Slides
Report Mistake
Comments
show all Show less
My Notes
show all Show less
Learning Material 2
show all Show less
Report mistake
Transcript
0 of 0

00:01 Grading is what we are looking at here. Just a couple of points. 00:05 Remember, as far as you are concerned with you cancer, you are paying much more attention to invasion. 00:10 For example, would you tell me the number one prognostic indicator for breast cancer. 00:14 What is the number one prognostic indicator of breast cancer. 00:18 Breast cancer moves over or it spreads to the axillary lymph nodes, your prognosis drops like crazy. 00:25 So, is that invasion or is that grading? That obviously is invasion. 00:30 Just a few words about grading? So, why do we use grading? For differentiation. 00:37 In pathology if it's well differentiated then you should be thinking about benign. 00:42 And specifically here in this picture, that arrow is pointint to a "pearl". What is this referred to? It's known as keratinization or squamous carcinoma with keratin pearls. 00:55 I don't care where the squamous cell cancer is, if it's well differentiated you will find this keratin pearls. 01:01 Places that you would find squamous cell cancer include tongue, cervix, larynx, skin. You understand? Squamous cell cancer could be found in various organs. Wherever it's located, histologically, you must be able to identify a keratin pearl. Literally looks like a pearl within a oyster but obviously not as romantic. Poorly differentiated. What does this mean? High grade. 01:37 To the point where it might actually be anaplastic. Next, I want you to be able to identify this. 01:42 You will be responsible also to identify these cell that we see. 01:47 That's pointing to the arrow but specifically I want you to take a look at the perimeter of this circle or this oval. 01:56 Those are glandular cells. Please be able to identify glandular cells. 02:02 And then, poorly differentiated, without a doubt this is adenocarcinoma. 02:07 Once again, give me examples of adenocarcinoma. 02:10 You are thinking about lower oesophagus with adenocarcinoma secondary to Barrett's oesophagus. 02:16 Should be thinking about primary gastric adenocarcinoma. You are thinking about colorectal cancer adenocarcinoma. 02:21 Pancreatic. Are you kidding me? Major cancer that kill people are adenocarcinoma. 02:31 Bronchogenic Carcinoma and Osteogenic Sarcoma. These are examples of malignant. 02:36 We will talk about this in much greater detail but at this point the topic is tumor markers, not specifically the cancers yet. But we will keep talking and talking. 02:46 If you are thinking about carcinoma, the major marker that you are paying attention to, cytokeratin. 02:52 That you will have to memorise. Have to. Sarcoma, the marker that you will be using is called, vimentin. 03:01 Whereas if it's lymphoma, most of your lymphomas tend to be B-cell origin. 03:06 And you are thinking about your cluster differentiation. Your CD, perhaps being something like your 45. 03:12 From Immunology, you should know about your CD's really well. For example, if you find a CD 1 or a CD 5 then you are thinking more along the lines of B or T? T. 03:24 And if it's T-cell of origin then most likely where would you be in terms of cancer on your body? What do you mean? Would I be on the skin or would you be in the GI tract? T-cells as far as you are concerned, skin. 03:37 What if you start finding CD's a little bit higher such as CD19, CD20, CD21. That's B-cell origin. 03:43 Where are you most likely if it's not the lymph node? GI tract. What we are looking at on the right is a osteosarcoma. 03:52 Osteosarcoma, where are you in this picture? I want you to get a good idea. 03:57 I'm not just going to go through things superficially. Each one of the things that we look at has huge impact, for you it's high yield. Everything that we do is high yield. So, where are we? The picture on the right is osteosarcoma. Most likely, what kind of picture and where would you be in your patient? Knee. That's where we are. So, what is this? This is going to be around the area of tibia and such. With osteosarcoma that arrow which is pointing in that circle, represents the metaphysis of the bone. Metaphysis, not the diaphysis. So metaphysis, osteosarcoma. 04:31 Most likely in your knee. In addition, you do a X-ray of that what are you going to find? What has happened is this tumor? Make sure your picture is straight here. You will be given a picture like this on your exam. 04:43 The cut section. Alright, so you want to think about the knee as being three-dimensional. 04:47 And you have a tumor, three-dimensional around that knee. Now you have taken a cut section. 04:53 Okay? So you literally have cut it in half. Now what you are seing here to the left would be the anterior portion of that knee. 04:59 The anterior portion which is bulging out. You should remember that in medical school you have heard about an X-ray that you would do of the knee and literally the periosteum of the knee is going to then bulge out. 05:10 You have heard of sunburst appearance, Codman triangle? This is osteosarcoma. Now is it ringing bell? What kind of marker are they going to give you so that you know that you dealing with a sarcoma? Is it a cytokeratin or is it a vimentin? Good. Vimentin. Whereas on the left, you would find a bronchogenic carcinoma. What kind? Well, we have to do histology. What do you mean? Well, you think bronchogenic carcinoma maybe this patient might have a small cell lung cancer or non small cell lung cancer. 05:40 Well, you have to do histology. We will talk about that further. 05:43 But with the carcinoma the point is what kind of marker are they going to give you? Maybe perhaps cytokeratin. Are we clear?

What is the grade of differentiation of a squamous cell carcinoma that contains keratin pearls?

Which of the following is NOT a usual location of adenocarcinomas?

Which of the following tissue markers is correctly matched with the neoplasm most commonly associated with it?

Which sites are most commonly affected by osteosarcoma?

As a Danish medical student, with English only as my second language, I admit, I had to spend some time "tuning in" on Dr. Raj's way of speaking. See, he's an extremely fast speaker, but as I did get used to this, I really learned to appreciate his way of teaching. Actually, his way of speaking kind of peaks my attention and focus, since my brain has to work harder for it. Thanks, Dr.!

As a Danish medical student, with English only as my second language, I admit, I had to spend some time "tuning in" on Dr. Raj's way of speaking. See, he's an extremely fast speaker, but as I did get used to this, I really learned to appreciate his way of teaching. Actually, his way of speaking kind of peaks my attention and focus, since my brain has to work harder for it. Thanks, Dr.!