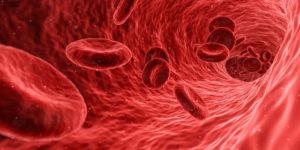 00:03 Well, last of all, let us look at the thrombocyte or a platelet. They're derived from huge cells in the bone marrow called megakaryocytes. These megakaryocytes are very very large as we will see when I give a lecture on bone marrow. They have a surface membrane or a cell membrane around the megakaryocyte that invaginates into the depth of the cell and therefore it cleaves off components of cytoplasm you see here. And those components of the cytoplasm separated from the megakaryocyte then travel into the blood from the bone marrow. So they are very small fragments, they are not cells. They are bits of cytoplasm, but they contain very important structures. Down the bottom on the left hand side, you can see a diagram of these platelets or thrombocytes. They have three different regions. They have a surface area, a surface region or a cell membrane type region. They have a peripheral region immediately underneath that surface and then they have a region that is full of organelles.They are very important because when they move through the blood and they come across an area where the blood vessel has been damaged and the endothelium has been lost, the underlying connective tissue of that part of the damaged blood vessel is very sticky. So these thrombocytes, these platelets then stick to that damaged area. And when they stick to that damaged area, they secrete serotonin. Serotonin is a potent vasoconstricting agent. So that constricts the damaged blood vessel and therefore it restricts the amount of blood flowing to the injured sites, so you do not loose blood content. That is the first job they do. The second job is that their membrane also attracts fibrinogen. Fibrinogen comes along and once it gets attached to that membrane or activated, it is converted into fibrins. Fibrins are insoluble protein and that forms a network across the damaged area and seals the clots, seals the damaged or the leaking part of the blood vessel forms the initial clot. And then more and more platelets come and adhere to that fibrin network and even red blood cells adhere there and form what we call the big clot at the vessel damaged site. Later on when the repair starts to take its process and is almost completed, then these thrombocytes then contract probably because they have got actin and myosin in them. And this sort of contraction of the whole clot is part of the first way in which the clot is finally dissolved. And the last thing that these thrombocytes do is they initiate plasminogen, which is a protein in plasma to be conferred to plasmin and plasmin is a very very potent fibrinolytic enzyme. 03:39 So it breaks down all the fibrin and it breaks down all the clot. And hopefully that occurs in the sequence that I have described regularly when we damage our vessels within all our blood capillaries. Sometimes that clot may loosen and leak into the blood system. 04:03 If the thrombus is not attached to the injured site, or if it breaks off, it becomes a thromboembolism, which can cause all sorts of problems. So sometimes people may need to take anticoagulants to try and reduce the chance of these thrombin forming. 04:22 Finally, let me just show you this table here. It is a slide showing you the relative proportions of the different blood cell types. The erythrocyte has a certain number to the microliter of blood. I am not going to repeat all the numbers here, but if you read the numbers you know that the female has a certain range of numbers of erythrocytes per microliter, and its slightly larger in the males. Reticulocytes which is cells that I'll referred to in the later lecture on bone marrow, are the very early young red blood cells released from the bone marrow into the blood. They occupy a very small proportion of the total erythrocyte count. But down below is the relative proportions, relative numbers per microliter of all the white blood cell types. At the top leukocytes are around 6000 to 10,000 per microliter. Leukocytes remember from that initial slide I showed you at the start of the lecture, occupy only one percent of whole blood. Now within that one percent, you can see a listed there, all the blood cell types that I have spoken about and it shows a relative numbers per microliter and also the relative percent of those cells in total leukocyte count. And as I said neutrophils occupy by far, the greater number of all the leukocytes followed by the lymphocytes and so on. So have a look at this table. It is just a representative of the relative numbers and proportions of all these blood cell types. 06:26 Well in summary then, what I have listed here are the main functions of all the blood cell types. Your job is to make sure now that you can go through this list and know these functions, but also more importantly now recognize each of these blood cells if you are shown a smear or an image of blood. So I hope you enjoyed this lecture on blood, and thank you for listening.

The lecture Blood: Thrombocytes by Geoffrey Meyer, PhD is from the course Blood.

Which of the following values best represents the normal percentage of eosinophils in the blood?

Which of the following cells secretes serotonin?

Which of the following is an important function of thrombocyte serotonin?

Which of the following forms a hemostatic plug over wound sites?

Professional, enjoyable and interactive. I also liked that the professor uses research based teaching techniques.

Professional, enjoyable and interactive. I also liked that the professor uses research based teaching techniques.