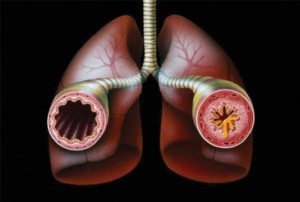 Asthma (Bronchial Asthma) — Classification, Diagnosis and Treatment
It is the chameleon of pulmonology: With as many different clinical phenotypes, making a diagnosis isn’t always easy, and pathogenesis is complex. In the following article, you will find all the important information about one of the most common chronic diseases in human beings: bronchial asthma.
read more
Load more
Share
Ask Questions
Take Notes
Download Slides
Report Mistake
Comments
show all Show less
My Notes
show all Show less
Learning Material 2
show all Show less
Report mistake
Transcript
0 of 0

The lecture Asthma: Acute Exacerbations by Jeremy Brown, PhD is from the course Airway Diseases.

Which of the following is a good measure of acute exacerbation of asthma?

Which of the following is a NOT a common clinical sign or symptom in acute exacerbation of asthma?

Which of the following is NOT a feature of severe asthma?

Which of the following best explains pulsus paradoxus?

Which of the following changes in the arterial blood gases has a worse prognosis in a patient with an acute asthmatic attack?