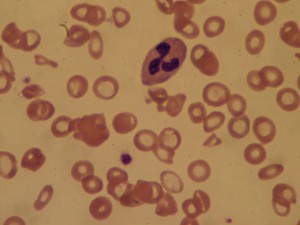 The lecture Anemia and Iron Deficiency – Red Cell Disorders by Paul Moss, PhD is from the course Hematologic Disorders.

Which parameter measured on a a peripheral smear is used in the classification of anemia?

Where is most of the body's iron contained?

Which form of iron is most readily absorbed by the intestinal cells?

A 60-year-old male presents for chronic fatigue. He reports dark colored stool. On examination, he has pallor of the conjunctiva. Complete blood count shows decreased hemoglobin and a peripheral smear is done. Which of the following is the next best step in management?

Which aminoacid is involved in the synthesis of heme?