Airway of a Child – Anesthesia for Children 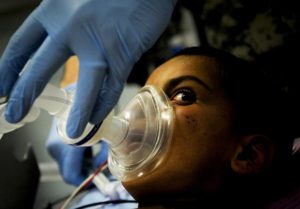 00:06 Hello ladies and gentlemen. In this lecture we're going to discuss some Special Areas of Anesthesia in which the anesthesiologists must adapt to Complex Surgery or Complex Medical Conditions in their patients, or to just unusual situations as far as patients are concerned. 00:30 We're going to talk about Considerations for Pediatric Care, because children are different from adults. 00:36 We're going to talk about how to deal with Thoracic Anesthesia and Thoracic surgery, which is a very complex and potentially quite dangerous area of anesthesia. 00:48 We're going to talk about Cardiac Anesthesia and how we deal with open heart surgery. And we're going to talk very briefly about Neuro-anesthesia, and the Different Types of Anesthetic that may be necessary to help patients through the sometimes extraordinarily long operations. So we're going to start with children. And if you think children are just little adults, let me tell you, you're wrong. 01:12 They are very much different, from an anesthetic perspective anyway, than adults. The anatomy is different, the difficulties involved in managing them are very different. And there are some risks associated with Pediatric Anesthesia that are not really associated with Adult Anesthesia. 01:30 The first thing that's critical to understand is that the pediatric airway is quite different from the adult airway. And I can tell you, as I am an adult anesthesiologist, that one of the things I dread is having to intubate a child, particularly a child under two years of age. 01:48 And the reason for that is that they are obligate nasal breathers, so you can't depend upon them maintaining their airway if you plug up their nose. They can't, they cannot breathe through their mouths when they're very small. They have proportionally a much larger tongue than adults. 02:06 They have proportionally a much larger occiput, so it's difficult to extend the head to the same degree as it is in adults. The larynx and trachea are funnel shaped with the narrowest point in the airway being at the cricoid, whereas an adult's it's at the glottis, at the opening of the glottis. The vocal cords are on a funny angle in children and it's hard for me to even describe it, because all I can tell you is that they're hard to find, they're hard to see, and unless you're very used to doing children, it's very challenging. The larynx is higher in the neck than it is in adults. It's at the C4 level instead of the C6 level. 02:48 As I already mentioned, the narrowest part of the pediatric airway is at the cricoid, so when you go through the cords in a child, you haven't hit the narrowest portion of the airway. 03:00 That comes next. And whereas in adults, the narrowest point is at the chords, so any tube that it'll go comfortably through the cords, is going to be fine. Whereas in children, comfortably through the cords may still mean stuck at the cricoid. The cricoid cartilage position in the child changes at different times of life and the narrow point remains the narrowest point of the cricoid until age 4 – 5. 03:30 And then in adults, the glottis increasingly becomes the critical stricture point. The glottis opening, the opening of the larynx changes positions over a childhood life, so that it's quite high in the throat in the premature babies, it's at an intermediate area in toddlers and newborns, and then it's much lower in adults. This diagram shows you the epiglottis. The epiglottis is much more curved in a child than in an adult. It's much stiffer than in an adult. 04:12 And it's harder to move. And you can see, it's harder to see the cords. The cords are kind of off in the distance and not as easy to identify as they were in our earlier pictures of adult airways.

The lecture Airway of a Child – Anesthesia for Children by Brian Warriner, MD is from the course Anesthesia in Special Situations.

Why is it difficult to intubate children younger than 2 years of age?

Why are children younger than 2 years of age obligate nasal breathers?

What is the narrowest part in children's airways?

Author of lecture Airway of a Child – Anesthesia for Children