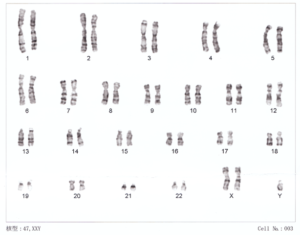 00:01 We’ll start by looking at the 46, XY karyotype that may be presenting anywhere along the spectrum from male to leaning towards female. Something has gone a little bit awry. So XY, one of the things we can have is complete dysgenesis. We see that 15% of that happens from deletion of the SRY gene which makes sense because there’s no SRY there, there’s no testis determining factor, and then no testes, and there’s no testosterone, so on and so forth. But here’s the crux is most of them actually have a normal SRY. So, it’s important to understand that the role of SRY is not the only piece of the puzzle because if SRY doesn't, actually if it has a mutation and doesn’t actually produce testis determining factor, then we’re not going to get testes, right? There could be lots of other things going on along this pathway between development of a full-on male through chromosome to external genitalia and full reproductive capacity. 01:27 We have to consider what else could be going on. One of the things I’ll highlight is our androgen insensitivity syndrome. Androgen insensitivity syndrome could arise if let’s say we do have a functional SRY gene and it does produce testis determining factor that turns the primordial gonad into a testis and the testis manages to secrete testosterone, right? We have a lot of steps along the way clearly that things could go awry. 02:05 But here, even if testosterone is made, that testosterone may not actually have an effect at the target site. 02:16 So, androgen insensitivity syndrome is one of the most common situations in which we have a mismatch between XY karyotype and the XY phenotype or a mismatch of that. There are two versions of that. 02:37 There’s complete androgen insensitivity syndrome which is completely insensitive. Then there’s partial androgen insensitivity syndrome which would mean that testosterone may be able to have some effect. 02:54 Now, there’s a really interesting story that I’ll never forget from my first college biology class. 03:02 A lot of these disorders that we’ll get into later are ones that you probably have heard of before but we’re highlighting them here so that you can be sure to remember them for your exams. 03:14 But I remember the story about a condition called guevedoce which means literally eggs at 12, where it would be a partial androgen insensitivity syndrome. It was very common for this syndrome to exist in one particular region of the world. I can’t quite remember where it is but I want to say, no, I’m not even going to say it because I might not get it right. But I’m just remembering the story of boys are growing up or the girls are growing up as little girls, running around and doing the things that they do. It was considered completely normal in this culture at 12 for girls to sometimes turn into boys. 03:57 This has to do with the partial androgen insensitivity syndrome in which the active form of testosterone, DHT isn’t actually turned, I mean, we don’t get testosterone actually turned into that active form. 04:12 In androgen insensitivity syndrome testosterone can be converted to DHT. This is because in androgen insensitivity syndrome, testosterone can be converted to DHT. The problem here is: There is a varying degree of end-organ insensitivity to androgens. This is due to mutation of the gene locus encoding the androgen receptor. So, it has a much milder effect. And there’s enough testosterone only at puberty when there’s another burst of testosterone production to actually spur the full development of male external genitalia. Of course, they would have hypospadias and some other abnormalities. But at their puberty time, they would become much more male. I always imagine how difficult it was to go through puberty, anyway. 05:03 Then have to go through puberty and change from a girl to a boy could be an entirely different situation. 05:10 But that would be an example of a partial androgen insensitivity hormone versus complete androgen insensitivity where you actually don’t get the development of male external genitalia at all. Testes happen, testosterone happens but actually no end product of external genitalia of being male. 05:35 There are a couple of famous examples of androgen insensitivity people. They tend to just be taller and leaner but are most definitely, definitely female. 05:48 There is one last interesting point that you could consider within this lecture: The 5-alpha-reductase deficiency. It is a rare autosomal recessive loss-of-function. A mutation of chromosome 2, in which there is normal testosterone production but no testosterone converted into DHT. And because of this 5-alpha-reductase deficiency the DHT-dependent virilization of genitalia does not occur. That means that the patient has female external genitalia at birth, but the internal urogenital organs are male. The testicles may be located in the inguinal canal or in the labia or scrotum. That means that patient will have an elevated testosterone level and a low DHT level with elevated testosterone-to-DHT ratio.

The lecture 46,XY Karyotype: Disorders by Georgina Cornwall, PhD is from the course Chromosomal Disorders.

Which of the following could lead to complete gonadal dysgenesis in an XY individual who has a normal sex-determining region Y?

Which of the following conditions may cause a female phenotype in an XY individual before puberty with virilization at puberty?

Which of the following phenotypes best corresponds to complete androgen insensitivity syndrome?

Approximately what percentage of 46XY complete gonadal dysgenesis is due to deletion of sex-determining region Y?