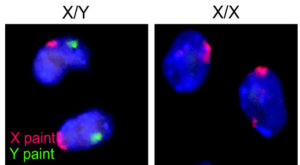 XY Gonadal Dysgenesis (Swyer Syndrome) — Signs and Symptoms
Swyer syndrome is characterized by complete gonadal dysgenesis in a phenotypically female who has a 46, XY karyotype. The presentation of Swyer syndrome is that of a tall female, with primary amenorrhea. The follicle-stimulating hormone levels are elevated and there is usually poor secondary sexual characteristics’ development. Karyotyping is indicated. Once the diagnosis is made, treatment consists of bilateral gonadectomy, hormone replacement therapy and psychotherapy. The only option for fertility is the use of donor ova.
read more
Load more
Share
Ask Questions
Take Notes
Download Slides
Report Mistake
Comments
show all Show less
My Notes
show all Show less
Learning Material 2
show all Show less
Report mistake
Transcript
0 of 0

00:00 Hi. Today, we’re going to discuss XY gonadal dysgenesis. First, let’s do an overview. 00:08 XY gonadal dysgenesis is a result of abnormal testicular development that occurs in utero. 00:14 There are three types, pure or complete, partial, and mixed. These are differentiated by the extent of normal testicular tissue within the gonad and the karyotype of the individual. 00:28 Let’s review the causes of pure or complete gonadal dysgenesis. In 15% of all diagnoses, there will be mutations in the SRY region. Remember, this is on the Y chromosome and should be unique to males. Larger side of genetic deletions of Yp which is the short arm of the Y chromosome which includes SRY have been implicated in XY gonadal dysgenesis. 00:56 Another 15% have haploinsufficiency in SF1. This is a gene that’s responsible for normal gonadal development especially in the male. Then a large percentage, 70% are actually unknown as to why they occur. Let’s review a little bit about the genetics or the cytogenetics which occur in the case of gonadal dysgenesis. Remember that we have somatic precursors that will become either granulosa cells or Sertoli cells. So in the males, Sox9 and Fgf9 are upregulated while in the female, Wnt4 and Rspo1 are actually upregulated. When you have an XY normal karyotype, you should have SRY region within the Y chromosome. That should in turn, turn off Wnt4 and Rspo1 while upregulation of Sox9 and Fgf9 occurs. In the genetic female who’s 46, XX, again Wnt4 and Rspo1 should actually be turned on while Sox9 and Fgf9 are downregulated. 02:03 Let’s review partial gonadal dysgenesis. Again, the karyotype here is 46, XY. 02:11 When testes dysgenesis does not involve the entirety of both gonads and the phenotype is ambiguous rather than female, you will see this with partial gonadal dysgenesis. Internal genitalia display varying degrees of Wolffian and Müllerian development. That is the paramesonephros or the mesonephros may be present or absent or actually a combination of both which basically correspond to the percent of the gonad which is dysgenic or streak gonads. 02:42 So now, let’s review mixed gonadal dysgenesis, 45, X/46, XY. Recall from the Turner syndrome lecture that this is a mosaic. The mosaicism is for 45 monosomy, XO/46, XY. This is the most frequent cause of mixed gonadal dysgenesis. A minority have a 46, Xi (Yq) karyotype. Individuals with partial or mixed gonadal dysgenesis, 46, XY typically present at birth with varying degrees of masculinization of external and internal genitalia. Let’s think a little bit now about the histology that goes along with gonadal dysgenesis. The major criteria for diagnosis of pure, partial, or mixed gonadal dysgenesis are the appearance in the histology of both gonads. Therefore, the ultimate diagnosis of any form of gonadal dysgenesis particularly the distinction between mixed and partial gonadal dysgenesis requires biopsy of both gonads. The major concern with XY gonadal dysgenesis is the risk of gonadoblastoma, a mixed germ-cell, sex-cord tumor. As you recall from the Turner syndrome lecture, this gonadoblastoma can happen even early in life and therefore needs to be removed. 04:08 The risk of gonadoblastoma formation in XY gonadal dysgenesis increases with age and has been estimated to be as high as 30% by the age of 30 years of age. 04:20 So once you removed the gonads, these patients whether they identify as male or female still need hormone replacement therapy. In order to complete secondary sexual development, sex steroid replacement should be initiated at the time of normal puberty when it should occur. 04:39 So patients who have a gonadectomy will require a DEXA bone scan for density prior to the induction of puberty to know what their baseline bone mineral density is. Then with the onset of exogenous hormone replacement, they will need it yearly thereafter for the first two years at least. 04:59 Let’s now review the fertility concerns in a patient who has gonadal dysgenesis. 05:04 Often, a normal uterus is present and hysterectomy is not recommended nor is it common in order to preserve their childbearing potential with assisted reproductive technologies or in vitro fertilization. Those methods are discussed in another lecture. 05:19 However, these patients do not carry successful pregnancies to term for unknown reasons. 05:25 Now, let’s review what we’ve discussed. Gonadoblastoma is a mixed germ cell, sex-cord tumor. 05:33 Dysgenic gonads need to be removed due to the risk of gonadoblastoma which is quite high. 05:40 Testes that regress before anti-Mullerian hormone production occurs lead to the preservation of Mullerian structures or the paramesonephros which is why these patients do have a uterus. 05:53 Gonadal dysgenesis patients require lifelong hormone replacement therapy. 05:58 Always karyotype the patients who are born with ambiguous genitalia to rule out congenital adrenal hyperplasia which is discussed in another lecture versus 46, XY gonadal dysgenesis which has been discussed here. Thank you and I hope you do really well on your exam.

The lecture XY Gonadal Dysgenesis (Swyer Syndrome) by Lynae Brayboy, MD is from the course Normal Puberty and Disorders of Sexual Development.

What cytogenetic alterations of Yp which include SRY have also been implicated in XY gonadal dysgenesis?

Which of the following is an investigation of choice for gonadal dysgenesis?

Which of the following tumors is a patient at risk of developing with gonadal dysgenesis?

Which of the following statements is FALSE regarding gonadal dysgenesis?