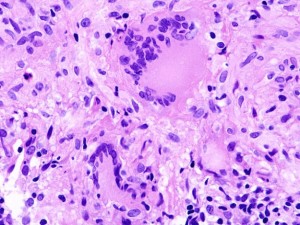 Tuberculosis (TB, Consumption) — Diagnosis and Treatment
Mycobacterium tuberculosis: Ca. 30 % of humankind are infected with this pathogen, 10 % sicken from manifested tuberculosis. The special feature of these bacteria is that they are very acid-fast, they grow very slowly, and can survive in macrophages. This way, they are a great challenge in terms of therapy and prevention for physicians and scientists. The following article distinctly presents you all the relevant facts for exams concerning tuberculosis which are needed for the second state examination and clinical practice.
read more
Load more
Share
Ask Questions
Take Notes
Download Slides
Report Mistake
Comments
show all Show less
My Notes
show all Show less
Learning Material 2
show all Show less
Report mistake
Transcript
0 of 0

00:01 Just to describe the pathogenesis in a bit more detail. What happens is that you are in contact with somebody with open pulmonary tuberculosis and what we mean by open pulmonary tuberculosis is that if you look at the patient’s sputum you will see the bacteria present when you stain it with a special stain called Acid Fast Bacili stain, so the sputum AFB positive is the description that's used. The tuberculosis reaches the lungs, invades the macrophages, but in fact quite a lot of the time, in 50% of the people, it will be killed and removed from the lungs and not cause any problems at all. In some people, it will actually start to cause primary disease or replicate enough to cause infection in the lungs and that’s classically described as a Ghon focus, where you have a mid-zone patch of abnormal shadowing, representing the replicating bacteria and the inflammatory response to that infection at that point. In the middle what we have is patients with latent disease, so the invasion of the macrophage does not lead on to active disease but the bacteria becomes dormant and stays within the macrophage for a very long period of time. In fact, if you are infected as a child, it is quite likely that you have a latent infection present at the point when you die, even if that maybe 70 or 80 years later. So the majority of people will fall in to the clear infection or perhaps having latent infection. So what can happen with the small minority with an active infection and that can progress and it can progress to affect other parts of the body. So as well as having pulmonary tuberculosis, it can spread to affect the lymph nodes, the pleura, affect the mind, the brain with the TB meningitis and perhaps other parts of the body as well. With latent disease, over a long period of time that may reactivate and that occurs in about 10% of people with latent disease as mentioned already. And that reactivation is a situation that occurs, is more likely to occur when immune surveillance is weakened against the bacteria. So as you get older your immune response becomes weaker. If you are malnourished, then your immune response also becomes weaker, and that may allow the bacteria to reactivate, and there are drugs that we can give to people that may allow the reactivation as well, corticosteroids, anti-tumor necrosis factor treatments, specifically it makes you much more likely to reactivate latent tuberculosis. And infection of HIV, is a very important reason why people may get reactivated disease and is associated with quite a high proportion of cases of tuberculosis across the globe. A slightly unusual and the reason why this occurs is not known, is that if you emigrate, you actually also increase the risk of reactivated disease. So in the UK for example we have quite a lot of people emigrating from countries with high risk of tuberculosis who have latent disease and within 4 or 5 years of arriving they frequently develop reactivated tuberculosis. So overall, if you look at the epidemiology of tuberculosis, in the UK , the median age of diagnosis is in the mid-thirties. 03:20 There is a slight male preponderance but essentially its a disease that splits relatively equally between men and women. The chance of having infection is dictated by what happens as a child whether you are likely to have a developed latent infection or not, and that is dictated by the prevalence of tuberculosis where you live, and therefore, people who are brought up in countries with a high prevalence of people with open tuberculosis and that's sub-Saharan Africa, the Indian sub-continent, and parts of the former USSR, then you are likely to have latent tuberculosis, much more likely to have latent tuberculosis, and therefore develop reactivated disease as you get older. The mid risk countries are other Asian countries, the north parts of Africa, the Middle East, South and Central America. In addition, people who are at the margins of society are also quite likely to get exposed to tuberculosis, the homeless, alcoholics, drug addicts, people who’ve been imprisoned. So this defines the patients most likely to have tuberculosis, where they were born, and if they've born in the west, whether they have the situation of being homeless or alcoholic, or drug addiction. 04:36 And that means the ethnic breakdown with people with tuberculosis in the UK is heavily biased towards people who were born abroad, and that’s why 35% of people with tuberculosis in UK are of South Asian origin, and another 18% are from Sub-Saharan Africa, with the Caucasians only making up 26% of the population. So just to go over to the risk factors of disease with a bit more detail. Recent emigration as we’ve discussed, for some reasons makes latent tuberculosis very likely to reactivate. Vitamin D deficiency has the same effect because vitamin D is an immune modulator and deficiency of that weakens your immune system of protecting you against tuberculosis. The same for HIV infection which is present in 8% of cases of tuberculosis and this problem with HIV allowing TB to reactivate will become a problem is actually before the patient has become heavily immuno-suppressed. Smoking, diabetes and the elderly being elderly are all examples where your immune system has been weaken to a degree and allows potentially the infections to take hold and cause a problem. We've already discussed homeless, drug abuse and alcoholism, and there is the other immuno-suppression- steroids, after transplantation, anti-tumor necrosis factor treatment. All these will make you more likely to reactivate latent disease.

The lecture Tuberculosis Pathogenesis by Jeremy Brown, PhD is from the course Infections of the Respiratory Tract.

Which of the following statements about Mycobacterium tuberculosis is TRUE?

Which of the following is NOT a risk factor for developing active tuberculosis infection?

Which of the following will NOT increase the risk of Mycobacterium tuberculosis reactivation?

Which of the following outcomes is LEAST expected after an exposed individual inhales Mycobacterium tuberculosis?

Which of the following countries is considered a high tuberculosis burden country by the World Health Organization?

Which population has a lower risk of succumbing to tuberculosis of the lung?