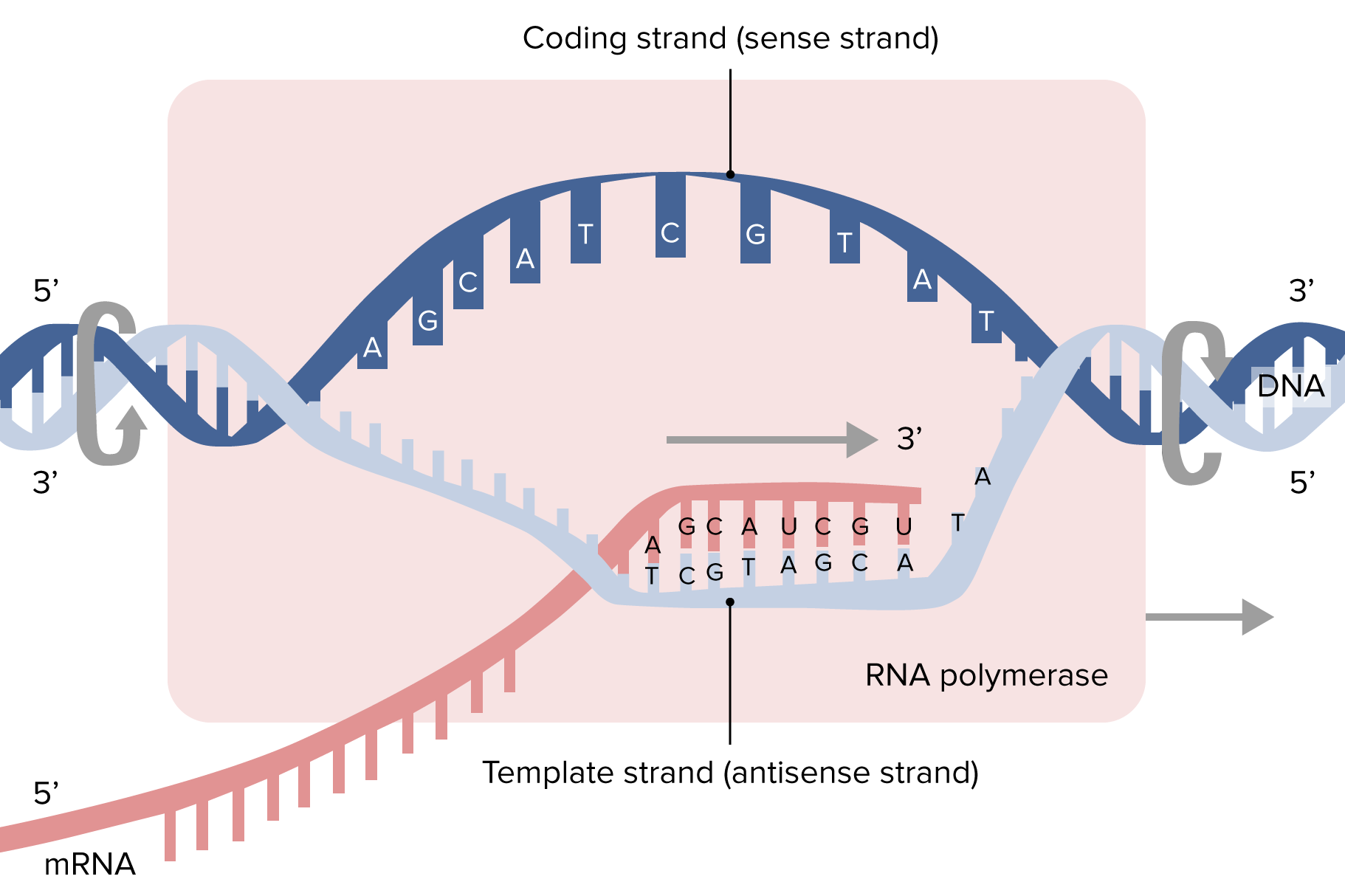 RNA Types and Structure
Ribonucleic acid (RNA), like deoxyribonucleic acid (DNA), is a polymer of nucleotides that is essential to cellular protein synthesis. Unlike DNA, RNA is a single-stranded structure containing the sugar moiety ribose (instead of deoxyribose) and the base uracil (instead of thymine). While DNA stores the genetic information, RNA generally carries out the instructions encoded in the DNA but RNA also executes diverse non-coding functions. There are 3 major types of RNA that perform different but collaborative roles in protein synthesis: messenger RNA (mRNA), transfer RNA (tRNA), and ribosomal RNA (rRNA). During transcription, RNA is synthesized from DNA through a series of steps catalyzed by the enzyme RNA polymerase. The mRNA formed will serve as an amino acid template for protein synthesis. Translation proceeds with the tRNA transporting the corresponding amino acid based on the deciphered nucleotide sequence (codon) in the mRNA. The ribosomes, which are composed of rRNA, then facilitate the assembly of amino acids into a polypeptide. These components work together to convert the mRNA template obtained from DNA into the desired protein.
read more
Load more
Share
Ask Questions
Take Notes
Download Slides
Report Mistake
Comments
show all Show less
My Notes
show all Show less
Learning Material 3
show all Show less
Report mistake
Transcript
0 of 0

00:01 I'll save that for another module. 00:02 Now transcription is the process whereby DNA makes RNA and it too is fairly intricate depending upon the system that we're talking about. Instead of beginning at an origin, replication of RNA from DNA begins at a special sequence in DNA called a promoter. So a promoter is a region in DNA near where the RNA will start to be made. The process requires obviously, the four ribonucleotides, ATP, GTP, CTP and UTP. It uses the base pairing rules of DNA to decide which the sequence of the RNA should be as it's being synthesized. The process requires an enzyme called RNA polymerase, and RNA polymerase works in some ways like DNA polymerase, it reads a strand of DNA and it knows which base to put in to make as it's synthesizing an RNA, it also makes phosphodiester bonds to join the individual nucleotides to each other. Now, the process occurs in the five prime to three prime direction, so that orientation that I've talked about before, is important consideration. It's preceding in the five prime to three prime direction, which means the strand that it's reading is oriented in the three prime to five prime direction, anti-parallel. Now, in contrast to DNA replication which replicates both strands of a double helix, transcription, the synthesis of RNA makes a copy of only one of the strands of DNA. 01:37 Now, I want us to go through very briefly and talk about a simple transcription system that exists in bacterial cells, prokaryotes. This description I'm going to show you here is actually much more complicated, in fact in the actual bacterium. We can see on the screen a double-stranded DNA that has a region that's getting ready to be transcribed, meaning the RNA is going to be made from it. We see two proteins that are joined to each other. We see first of all protein in blue called a sigma factor that I'll talk about in just a moment. 02:11 The RNAP is an RNA polymerase and what RNA polymerases do is they actually synthesize the molecule. 02:18 The function of the sigma factor is to recognize the promoter that is the sequence in the DNA where the transcription is supposed to start. It’s guiding the RNA polymerase to the promoter and helping it to bind to it. You'll notice also that the DNA, a double helix has two different strands, it has a strand called the coding strand and a strand called the template strand. The template strand is the one that the RNA polymerase will copy as it's going through. We see the gene is the location of the place where the transcription will occur. Now, the promoter is the sequence that the sigma factor actually recognizes and promoter has a specific sequence. Promoters in DNA, recognized by proteins typically are A/T-Rich sequences. Now A/T base pairs you recall earlier, had weaker hydrogen bonds, they only had two compared to the three of the GC. And it's not a surprise then, that promoters oftentimes have A/T-Rich regions because it's easier to peel those strands apart. During the transcription process, the RNA polymerase, as we'll see in just a moment, works between the two strands, so the strands literally have to be peeled apart. 03:39 We can see here now that the transcription process has started, the strands have been peeled apart and the RNA polymerase has begun synthesizing an RNA. The RNA is shown in blue and you can see the five prime end of it hanging off. It turns out that during transcription that RNA, in fact does hang off of the DNA, kind of like a tail as the process goes on. 04:04 The sigma factor only functions during the process of initiation. After transcription has gotten started, the sigma factor is released, it'll go find a new RNA polymerase and go help it to find another promoter. The RNA is being made as I noted in the five prime to three prime direction, and it's copying the strand below that's oriented in the three prime to five prime direction, again in the antiparallel way. 04:34 Now, termination of transcription is a very important process. When RNA polymerase moves along, it doesn't copy the entire chromosome with the RNA, in fact it stops at a specific place. 04:45 Prokaryotic cells have two ways of terminating transcription. The first of these is probably the easier to understand and it's called the Rho factor termination. Rho is a protein that grabs that RNA tail that was hanging off of the DNA that I showed earlier and the Rho factor literally climbs that tail. It uses energy from ATP to actually do the climbing and Rho will climb faster than the RNA polymerase can advance, which means that ultimately Rho will catch the RNA polymerase and when it catches the RNA polymerase it will cause the RNA polymerase to fall off of the DNA and transcription will stop. Another way that transcription is stopped in prokaryotic cells is a process called factor independent termination. 05:38 Now factor independent termination, as its name suggests, does not require a protein climbing a tail. Instead, it relies on a special sequence that's in the RNA being made. So when the RNA polymerase encounters that sequence and starts to synthesize it, that sequence will do something interesting, it'll form a base pair with itself or a series of base pairs with itself forming what we refer to as a hairpin. That hairpin structure is able to actually physically alter the RNA polymerase and the RNA polymerase as a result, falls off of the DNA there as well, terminating transcription.

The lecture Transcription – DNA, RNA and the Genetic Code by Kevin Ahern, PhD is from the course Biochemistry: Basics.

What is the role of the sigma factor in the transcription process?

Which of the following factors participates in the termination of the transcription process?

Author of lecture Transcription – DNA, RNA and the Genetic Code

Conveyed the process in a short &digestable way.I LIKED THE WAY OF presentation too.

Conveyed the process in a short &digestable way.I LIKED THE WAY OF presentation too.