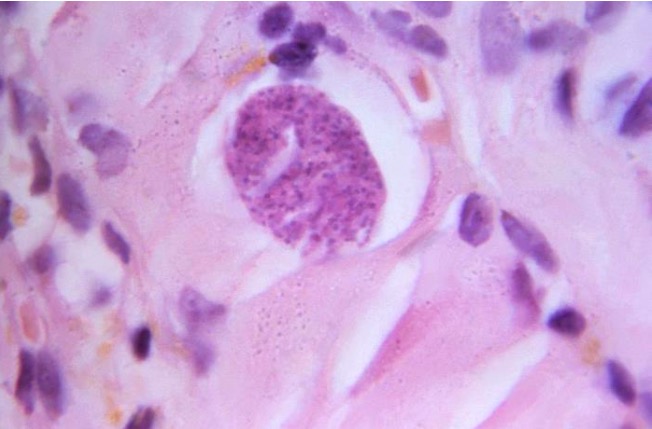 Toxoplasma/Toxoplasmosis
Toxoplasmosis is an infectious disease caused by Toxoplasma gondii, an obligate intracellular protozoan parasite. Felines are the definitive host, but transmission to humans can occur through contact with cat feces or the consumption of contaminated foods. The clinical presentation and complications depend on the host’s immune status. Patients who are immunocompetent usually have no symptoms, whereas those who are immunocompromised may develop CNS toxoplasmosis or chorioretinitis. The diagnosis is often made based on serology or PCR. Patients who are immunocompetent may not need any treatment. Patients who are immunocompromised or those with severe disease may require combination therapy with pyrimethamine, sulfadiazine, and leucovorin.
read more
Load more
Share
Ask Questions
Take Notes
Download Slides
Report Mistake
Comments
show all Show less
My Notes
show all Show less
Learning Material 2
show all Show less
Report mistake
Transcript
0 of 0

The lecture Toxoplasma gondii – Protozoa (CNS Infection) by Vincent Racaniello, PhD is from the course Parasites.

Which of the following organisms is the definitive host for Toxoplasma gondii?

How can humans protect themselves from contracting Toxoplasma gondii infections?

Which of the following is the correct pattern of Toxoplasma gondii transmission?

Amazing lecture! So easy to understand and so enjoyable to watch; congratulations!

Amazing lecture! So easy to understand and so enjoyable to watch; congratulations!