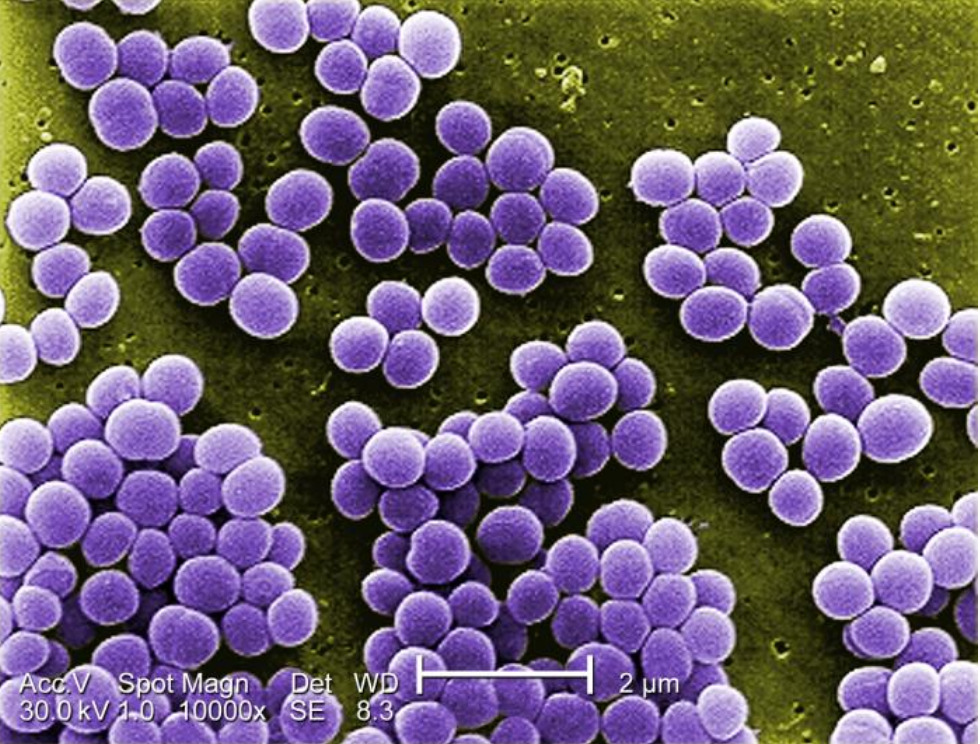 00:01 What kind of other diseases do these cause? They cause staphylococcal scalded skin syndrome, try and say that four times quickly. This is a skin illness, as you can see here and I think the name tells you what it looks like, this mainly affects neonates. This is caused by sloughing of the skin. The skin is coming off. It’s red and angry looking, caused by toxins produced by the staphylococci, specifically exfoliative toxins A and B. Exfoliation, the loss of your skin. You can also describe a disease called toxic shock syndrome, TSS, which became popular not very long ago. This is accompanied by fever, skin rash, hypotension, low blood pressure and also peeling of the skin, exfoliation. Toxic shock syndrome was first described in connection with the use of highly absorbent tampons that allowed organisms to proliferate. Now tampons went through a revolution in their production, where they became extremely absorbent and also would block off the vaginal canal and the makers thought this was a great thing, because it's convenient for women, but it turned out that these trapped the staph bacteria in the vaginal canal, allowed them to proliferate in and around the tampon and elaborate toxins and this brand-new disease that had never been seen before, toxic shock syndrome suddenly was described and that's a staphylococcal disease. Associated initially with the use of tampons but now we know there are other causes as well. 01:54 One of the main toxins produced by staphylococci that causes toxic shock is called TSST-1, toxic shock syndrome toxin number one and this is an enterotoxin. It actually acts as a super antigen. Super antigens bind the T cell receptor and the major histocompatibility protein on the surface of cells and cause massive release of cytokines from macrophages and T cells, that are then responsible for the symptoms, say of toxic shock syndrome. 02:29 The whole idea of toxic shock elaborates from these cytotoxins that are produced. Staphylococci can also cause food poisoning, we've been talking about skin diseases of various sorts, but they can also be in your food and they produce enterotoxins that are in the food when you eat it, these make you sick. The bacteria, if they contaminate the food, and you can imagine that someone may have staph aureus on their hands, they're preparing food, they haven't washed their hands, they don't wear gloves, you now have staph aureus in the food, if it's not kept cold, if it's at room temperature which sometimes happens during food production or serving, the bacteria will grow, they will produce their toxins and when you eat it, you will get sick. This typically happens with meats, including poultry, egg products, salads, milk and dairy products. So if you ever have been to a buffet where there is lots of food spread out on the table, if it sits there for hours at room temperature, the bacteria can grow and make their toxins. Next time you go to such a function, make sure the people are wearing gloves, if they are not, you should just stick with the wine and don't touch the food. This disease, when you ingest these toxins, causes nausea, vomiting, stomach cramps and diarrhea and it's typically a rather rapid onset. So food poisoning where you are eating food that has a toxin in it already, the onset is quick. So if you eat something and in an hour or two later you're vomiting, you can say well that could be a staph aureus toxin caused food poisoning. In contrast, if it takes a few days to get sick, that means the bacteria have to replicate in you before you get sick. So this is a rapid onset food poisoning caused by staphylococci and then in two or three days you recover.

The lecture Toxin-mediated Diseases – Staphylococcus Infection by Vincent Racaniello, PhD is from the course Bacteria.

Which of the following is NOT a consequence of staphylococcal infection?

Why does food poisoning caused by S. aureus have a rapid onset?

This video is precise and concise, thanks a lot, I found this series to be incredibly helpful

Nice!
By Eleftherios B. on 16. February 2019 for Toxin-mediated Diseases – Staphylococcus Infection

Nice one, well described, nice talker, I enjoyed a lot. Keep it up!

This video is precise and concise, thanks a lot, I found this series to be incredibly helpful

Nice!
By Eleftherios B. on 16. February 2019 for Toxin-mediated Diseases – Staphylococcus Infection

Nice one, well described, nice talker, I enjoyed a lot. Keep it up!