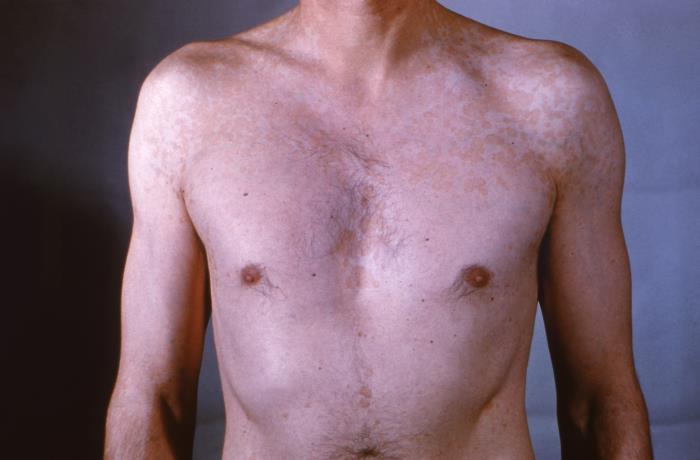 Malassezia Fungi
Malassezia is a lipophilic yeast commonly found on the skin surfaces of many animals, including humans. In the presence of certain environments or triggers, this fungus can cause pathologic diseases ranging from superficial skin conditions (tinea versicolor and dermatitis) to invasive disease (e.g., Malassezia folliculitis, catheter-associated fungemia, meningitis, and urinary tract infections). Patients with tinea versicolor develop an asymptomatic or mildly pruritic hypopigmented or hyperpigmented rash on the chest, back, abdomen, or face. Seborrheic dermatitis presents with an erythematous, pruritic rash with greasy scales and yellow crust, most commonly affecting areas of the face, upper trunk, or intertriginous regions. The presentation of Malassezia folliculitis is similar to that of bacterial folliculitis, with pruritic, monomorphic papules or pustules in a follicular pattern. The diagnosis of the superficial skin conditions is primarily by exam, but may be confirmed by microscopy of skin scrapings. Management entails the use of topical and oral antifungal agents.
read more 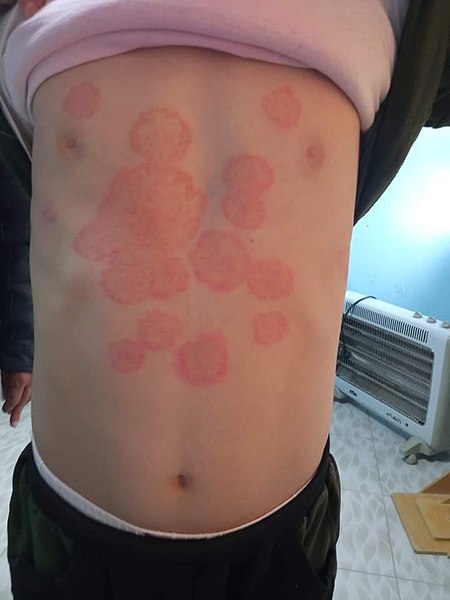 Dermatophytes/Tinea Infections
Tinea infections are a group of diseases caused by fungi infecting keratinized tissue (hair, nails, and skin). These infections are termed dermatomycoses and are caused by the dermatophyte fungi. There are approximately 40 dermatophyte fungi that are part of 3 genera, including Trichophyton, Epidermophyton, and Microsporum. These infections can affect any part of the body but occur most often in warm, moist regions like the groin and the feet. The diagnosis is clinical with characteristic skin findings, but it can be confirmed with microscopy of skin scrapings. The treatment depends on the site and magnitude of infection but typically begins with topical antifungals like the -azole drugs and terbinafine, and it may progress to oral versions of these medications if topical treatment fails.
read more
Load more
Share
Ask Questions
Take Notes
Download Slides
Report Mistake
Comments
show all Show less
My Notes
show all Show less
Learning Material 2
show all Show less
Report mistake
Transcript
0 of 0

00:01 Next stop, let's talk about tinea corporis. 00:04 Now, tinea corporis, also known as 'ringworm' is a very common fungal infection. 00:10 It's caused by a specific group of fungi called dermatophyes. 00:14 They just love to feed on human keratin, you know from dead skin, nails, hair, that sort of thing. 00:20 The risk factors for tinea corporis are diabetes, HIV, obesity, pets and just moisture or hygiene issues. 00:29 Now tinea is a member of the tinea family which I'm now happy to introduce to you. 00:35 Here it is, the tinea family. 00:38 Now each of the variants that I'm showing here is characterized by a slow progression of a pruritic, scaly rash but each has some unique features. 00:47 First off, tinea capitis. 00:49 This is actually one of the ones that's most difficult to treat It appears of course on the head, capitis - in the scalp. 00:56 It's actually one of the diseases that we consider a cicatricial cause of alopecia which means that it can cause scarring if left untreated. 01:03 And you could have a patch of hair loss that will not grown back. 01:06 Tinea pedis, of which there's 2 major types. 01:09 There's the moccasin form which we also call it 'athlete's foot', with some scaling, white rash around the moccasin distribution of the foot. 01:19 or as shown in this picture, tinea pedis can manifest as interdigital maceration where we have tinea basically between the toes. 01:27 This is most commonly found in folks with diabetes. 01:30 Next up is tinea corporis. 01:32 Again, also known as 'ringworm', you can see the annular shaped lesion there. 01:37 and it kinda looks like what our patient has, right? These would be single or occasionally multiple, raised, annular erythematous lesions with an irregular border, central clearing and scale. 01:50 Occasionally, we may even see a few pustules in there. 01:54 And then on the far right, tinea unguium. 01:56 More colloquially known as onychomycosis - that's a term we would typically use but this is basically infection of the nail itself and this is also more commonly seen in folks with diabetes but it tends to just happen as a person gets older as well. 02:12 Alright, so looks like we'll have to keep tinea corporis on our list for now. 02:17 The diagnosis if we want to pursue it is gonna require a KOH prep which we'll talk more about in a little bit. 02:23 Let's move on to talk about tinea versicolor. 02:27 Now tinea, also called pityriasis versicolor is also not a dermatophyte but it is a fungus. 02:36 It's actually a saprophytic lipid dependent yeast, called Malassezia globosa so it's somewhat of a misnomer that it's still referred to as tinea versicolor. 02:46 It is in fact just normal skin flora and again the specific microbe is called Malassezia globosa. 02:52 Risk factors for tinea versicolor are heat, someone going to the tropics for example, immunosuppression, hyperhidrosis or excess sweating, and if somebody uses lots of oily lotions, that can contribute as well. 03:05 Now what we're looking for is hyperpigmented in someone who's of white complexion or hypopigmented in someone who is of darker complexion, scaly macules to the chest, the back, the upper arms. 03:20 It's very subtle as you can see in this image that we're just seeing some very subtle hyperpigmented patches distributed on this person's arm. 03:30 It's occasionally mildly itchy but pruritus is not one of the most salient features of tinea or pityriasis versicolor. 03:39 Alright, so with a single, raised, erythematous, annular shaped itchy lesion, tinea versicolor doesn't really seem to fit in with that diagnosis, so I think we can x that one out.

The lecture Tinea Infections: Tinea Corporis and Tinea Versicolor by Stephen Holt, MD, MS is from the course Skin Infections.

A 26-year-old baseball player presents to the clinic with a circular, itchy skin rash over his thigh. His medical history is significant for insulin-dependent diabetes mellitus. On physical examination, the lesion is circular with an erythematous base and overlying scales. What is the most likely diagnosis?

Which of the following statements is correct regarding tinea versicolor?