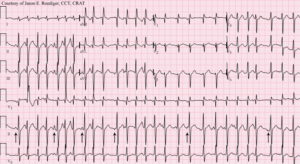 Multifocal Atrial Tachycardia — Symptoms and Treatment
Multifocal atrial tachycardia is a type of atrial arrhythmia characterized by rapid heart rate with at least 3 or more P wave morphologies. It is termed multifocal since the signals arise exclusively from atrial tissues instead of the sinus node. For an adult, normal heart rate ranges between 60 and 100 beats per minutes. In multifocal atrial tachycardia, the heart rate range between 100 and 250 beats per minute. It is more common in people with serious cardiopulmonary diseases (heart-lungs).
read more
Load more
Share
Ask Questions
Take Notes
Download Slides
Report Mistake
Comments
show all Show less
My Notes
show all Show less
Learning Material 2
show all Show less
Report mistake
Transcript
0 of 0

The lecture Tachycardia: Multifocal Atrial Tachycardia: Diagnosis and Treatment by Carlo Raj, MD is from the course Arrhythmias.

Which of the following statements about supraventricular tachycardia is NOT true?

What is the difference between wandering atrial pacemaker (WAP) and multifocal atrial tachycardia (MAT)?

Which of the following components is NOT part of the definition of multifocal atrial tachycardia?

Which of the following statements about phase 4 of the pacemaker action potential is FALSE?

Which of the following is the easiest way to identify a sinus rhythm on ECG?