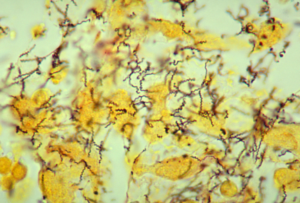 Syphilis — Types, Diagnosis and Treatment
The causative factor of syphilis is Treponema pallidum (TP), family motile Spirochaetaceae, which is very common all over the world. TP can be transmitted via close sexual contact or transplacentally (vertical way). Also, syphilis can be acquired or congenital, both of them having early and late stages. TP invades the host body through the breaches in the squamous or columnar epithelium affecting lymphatic nodes and disseminates with the blood stream to all parts of the body.
read more
Load more
Share
Ask Questions
Take Notes
Download Slides
Report Mistake
Comments
show all Show less
My Notes
show all Show less
Learning Material 2
show all Show less
Report mistake
Transcript
0 of 0

00:02 We turn our attention now to what some people call the grand-daddy of them all, among sexually transmitted infections, and that is syphilis. 00:13 Syphilis is a chronic multi-stage sexually trasmitted infection caused by a spirochete known as Treponema pallidum. 00:27 And I think you can see from the attached picture that this microorganism is spiral in shape. 00:40 Syphilis has not gone away. 00:42 Indeed, there are 11 million new cases globally every year. 00:51 The highest incidence in the United States is among men who have sex with men, especially among poor minority communities in the Southern United States. 01:04 In Europe, the rates are between 4.4 and 10.4 per 100,000 population, with especially increased rates in eastern Europe and Russia. 01:18 The epidemiology of syphilis has been greatly influenced by the HIV pandemic. 01:29 There are very high rates of HIV infection among people who are diagnosed with syphilis. 01:35 Syphilis affects a million and a half pregnant women each year, and about 50% of those women are going to have some untoward outcome from infection in the form of miscarriage, still birth neonatal death, a very low-birth-weight infant or an infant born with congenital syphilis. 02:10 Let's talk something about this organism. 02:14 The organism is known as Treponema pallidum subspecies pallidum, And it's a spirochete. 02:22 Note how thin this organism is. 02:25 It's 0.2 microns in diameter. 02:28 A typical bacterium is going to be at least 1 micron in diameter and usually several microns wide. 02:38 Because it's so thin, you cannot visualize this organism by conventional microscopy. 02:47 It's so thin. 02:49 It's transmitted by sexual contact. 02:51 And it's got these flagella inside of the perisplasmic space of the organism, that extends from these little, call them motors, they're really biomotors, at each pole that overlap in the middle. 03:06 And it causes the organism to move by wiggling. 03:10 This is an undulating movement and it goes through fluids, tissue, and because its so thin, it goes between cells. 03:25 So as I've mentioned, it is spread by person-to-person transmission, usually by intimate contact, either genital-genital contact or oral-genital contact. 03:40 This organism can directly penetrate the mucous membranes by little minute breaks or abrasions in the skin or the mucosa. 03:54 Once it does that, it can dessiminate through the lymphatics, gets into the bloodstream, then circulates everywhere. 04:04 Once it gets into the bloodstream, these treponemes combine to the vascular endothelium. 04:10 They cause, in a sense, a vasculitis. 04:13 That can happen in their target organs, and involve the parenchyma of those organs. 04:21 And these thin spirochetes can penetrate through tight junctions separating endothelial cells. 04:29 Treponema pallidum has an outer membrane which helps protect it from recognition by our immune system. 04:37 However, utimately, it's going to be phagocytosed by dendritic cells and then these cells will present the treponema antigens to B cells and T cells.

The lecture Syphilis – Definition and Pathology by John Fisher, MD is from the course Genital and Sexually Transmitted Infections.

For Treponema pallidum, which of the following is the main means of access to subcutaneous tissue?