Structure of the Bony Orbit 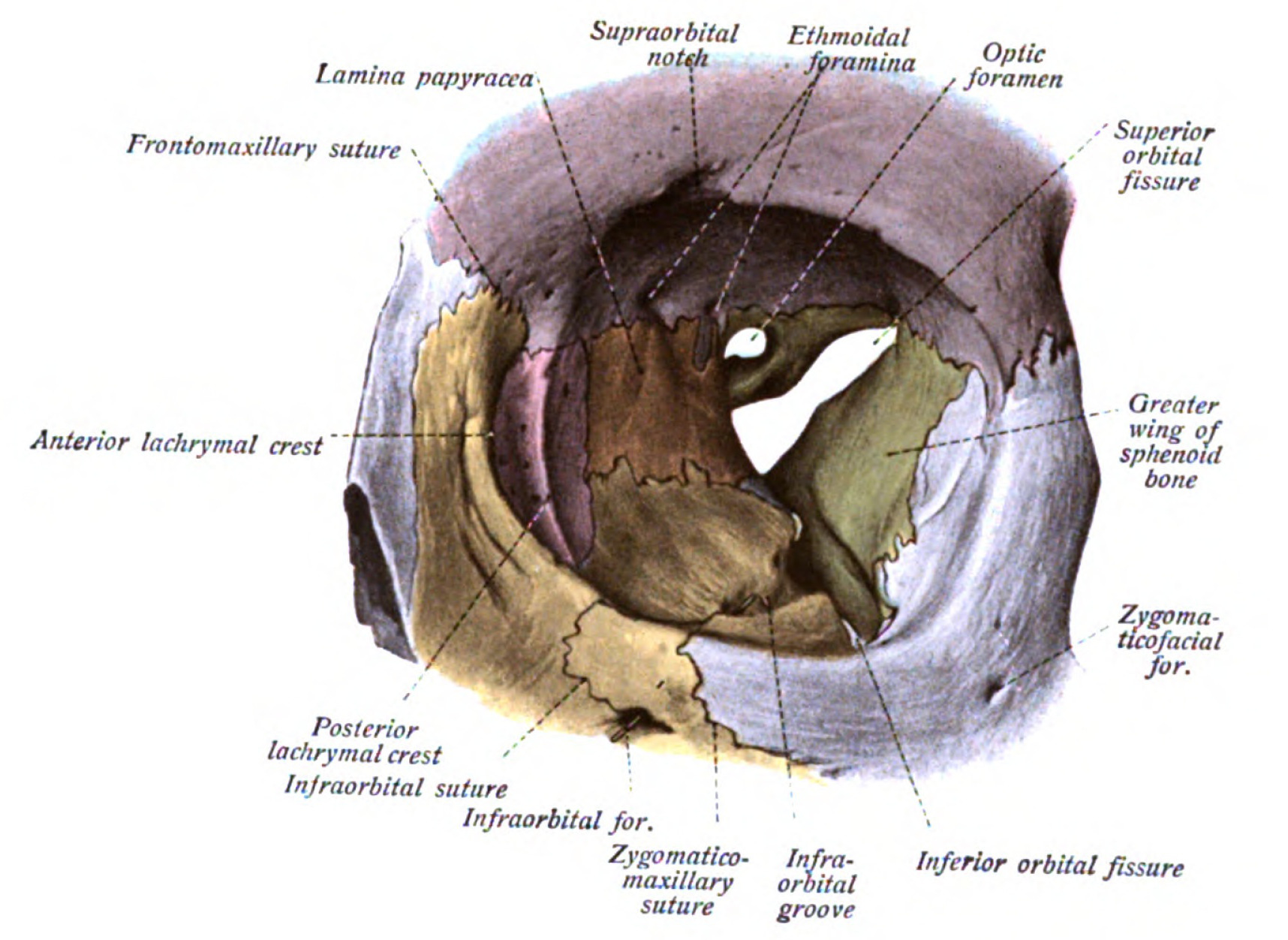 00:01 Welcome to today's anatomy lecture. 00:03 In this lecture, we will discuss the bony ocular orbit and accessory structures of the visual apparatus. 00:11 So without further ado, let's dive straight into it. 00:15 The bony ocular orbits or skeletal cavities located on either side of the nose. 00:22 These orbits house protect and support the functioning of the eyes themselves. 00:29 Accessory visual apparatus such as the extra ocular muscles, the nasal lacrimal apparatus, associated neuro vasculature, as well as stromal connective tissue and fat. 00:44 The bony orbits are roughly pyramidal in shape, with the orbital base located anteriorly at the orbital opening and the orbital apex located posteromediately. 00:59 The orbits themselves are formed by the frontal, maxillary, ethmoid, sphenoid, lacrimal, zygomatic, and the palatine bones. 01:12 Furthermore, the ocular orbit is said to have four surfaces. 01:16 These include a roof, a floor, a medial wall, and a lateral wall. 01:24 The roof of the orbit is formed primarily by the concave orbital plane of the frontal bone, and by the lesser wing of the sphenoid bone near the apex of the orbit. 01:37 Here two landmarks of significance can be found, the trochlear fovea, located anteromedially, which is the site of attachment for the cartilaginous trochlea for the superior oblique muscle and the lacrimal fossa, which is located anterolaterally in houses the orbital part of the lacrimal gland. 01:58 The medial wall the orbit is formed by three bones, from the base to the apex they include the lacrimal bone, the orbital plate of the ethmoid bone, and the body of the sphenoid bone. 02:11 Here are several additional landmarks of significance can also be found. 02:15 At the junction the orbital plate of the ethmoid bone and the orbital plate of the frontal bone, anterior and posterior ethmoidal foramina can be seen. 02:24 The lacrimal bone contains a fossa for the nasolacrimal sac. 02:30 The floor of the orbit is formed largely by the orbital plate of the maxilla. 02:35 Additionally, the zygomatic bone and orbital process of the palatine bone also contribute to its formation. 02:44 Two passages of neuro vasculature can be found in the floor of the orbit. 02:48 Posteriorly located we find the inferior orbital fissure medially located the infra orbital canal, which then opens into the infra orbital foramen onto the face. 03:01 A direct blow in the front of the orbit with a blunt object larger than the orbital aperture, for example, a baseball, a fist, may cause a rapid increase in intraorbital pressure and a resulting blowout fracture of the thin orbital floor. 03:19 The lateral wall the orbit is formed by the zygomatic bone anteriorly and the greater wing of the sphenoid bone post early. 03:29 And lastly, the landmarks of importance located in the lateral wall include: The zygomaticofacial, and zygomaticotemporal foramen, located interiorly, posterosuperiorly located is the superior orbital fissure, and it exists between the greater and lesser wings of the sphenoid bone. 03:51 In the previous slides, we have mentioned various openings within the bony orbit of the eye that permit the passage of various neurovascular content. 04:00 The first of these passages is the optic canal. 04:03 This canal is formed between the lesser wing and the body of the sphenoid bone. 04:08 It connects the orbit to the middle cranial fossa, and permits the passage of the optic nerve which is the second cranial nerve and the ophthalmic artery. 04:19 The next two passages are the superior and inferior orbital fissures. 04:24 The superior orbital fissure, as I already mentioned, is formed between the greater and lesser wings of the sphenoid bone and it permits the passage of ocular motor, trochlear and the abducens nerves, which are also going to be cranial nerves three, four and six respectively. 04:45 The nasal ciliary, lacrimal and frontal branches of the ophthalmic nerve, which is the first division of the trigeminal and the trigeminal is known as the fifth cranial nerve also pass. 04:59 And then lastly, we passage of the superior ophthalmic vein. 05:04 The inferior orbital fissure lies between the greater weighing of the sphenoid bone above and the palatine and maxillary bones below. 05:13 And it permits the passage of: The zygomatic, infraorbital branches of the maxillary nerve, which is the second division, the trigeminal nerve, also the infraorbital vein and artery, and lastly, the inferior ophthalmic vein. 05:30 And lastly, there are the ethmoidal, infraorbital and zygomaticofacial in zygomaticotemporal foramen, which permit the passage of neuro vasculature are of the same name. 05:43 One additional structure I'd like to touch upon before moving on to the next topic is the common tendinous ring. 05:50 This is a fibrous band, which surrounds the optic canal and the superior orbital fissure and it gives attachment to the four recti muscles at the apex of the orbit. 06:02 And atomically, this ring is often used to divide the content entering both the optic canal and superior orbital fissure as lying within the common tendinous ring or line outside the common tendinous ring. 06:16 Additionally, all structures entering via the inferior orbital fissure will all lie outside the common tendinous ring. 06:24 Next I'd like to discuss supportive structures located within the orbit which include the connective SEPTA, sheaves, ligaments and fat.

The lecture Structure of the Bony Orbit by Craig Canby, PhD is from the course Head and Neck Anatomy.

Where on the roof of the orbit is the lacrimal fossa?

What pathologic process leads to an orbital blowout fracture?

Which structure travels within the superior orbital fissure?

Author of lecture Structure of the Bony Orbit

Very nice explanation but please include more assessment. Besides objective questions, include subjective questions and give answers and ask the individual to self evaluate! A very helpful and intuitive way i think. Please implement at the earliest

Very nice explanation but please include more assessment. Besides objective questions, include subjective questions and give answers and ask the individual to self evaluate! A very helpful and intuitive way i think. Please implement at the earliest