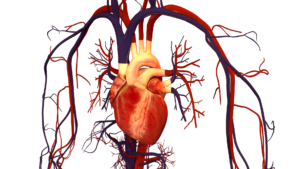 Parts and Functions of the Cardiovascular System (Circulatory System)
The purpose of the blood circulation system of the human body is the convective transport of respiratory gases, nutrients, hormones, and warmth. The blood acts as a vehicle that is pumped by the heart through the blood vessels and back to the heart. The blood circulation is a rapidly adjustable system that is vitally important for maintaining the body functions. High blood pressure (arterial hypertension) is one of the most common diseases in our society. Thus, a physician must know and understand the blood circulation. This article provides an extensive overview.
read more
Load more
Share
Ask Questions
Take Notes
Download Slides
Report Mistake
Comments
show all Show less
My Notes
show all Show less
Learning Material 2
show all Show less
Report mistake
Transcript
0 of 0

00:00 Well, now let’s look at a large artery such as one that I just described on the left-hand side, and look at a small artery shown here on the right-hand side. All that really happens is that the layers just get thinner. You start to lose layers of smooth muscle. Here on the right-hand side, the small artery has an endothelial lining. You can see the nuclei of the endothelial cells. Remember, endothelium is the internal lining right throughout the cardiovascular system. It’s a very thin epithelial lining, simple squamous epithelium, but we call it endothelium or we call the individual cells endothelial cells. Smooth muscle is also in the tunica media. And there’s only, perhaps, four or five layers of smooth muscle in the small artery. And look very carefully at the nuclei of the smooth muscle. Sometimes, you can see them appearing like a corkscrew, a helical pattern. That’s because of the way in which smooth muscle contracts. It tends to twist during its contraction. And that’s an indication of the way in which the contractile of filaments are arranged, unlike skeletal muscle. And then it’s very hard of course in this section, in this small artery, to then distinguish components of the tunica adventitia, and where the surrounding connective tissue begins. So, essentially, the layers just get smaller, particularly, the layers of the media, the layers of the smooth muscle, when you go from a large artery to a smaller one. Well, what about comparing a large artery with a large vein? On the left-hand side is a normal section of a large artery. Just have a look at again and make sure you can get the tunica media, the tunica adventitia, and the tunica intima. Recall again what is stained smooth muscle and what is stained collagen. 02:16 But then have a look on the right hand side, it’s a large vein, and the difference is the layers of smooth muscle, the layer of the media, is very thin for the same sized vessel. 02:30 And that’s why earlier I explained that when you look at the relative thickness of the wall of the vein relative to the lumen size, it’s a lot smaller than if you compare the thickness of an artery with the dimensions of its lumen. And again, the adventitia is dominated by collagen. And again, you really can’t see where it blends with the surrounding tissue although this is a high magnification. So when you compare an artery with a vein, the artery is going to have a thick wall, particularly the tunica media. It’s going to have a circular profile because of the pressure inside it. The corresponding vein is going to have a much thinner wall. And also, going to be more collapsed because it’s working under an internal very low blood pressure. What about then looking at a small artery and what we call the arteriole? On the left-hand side is a small artery, similar to the one you saw previously. And on the right-hand side is a very small artery, we call an arteriole. An arteriole we term when it has only got one or two layers of smooth muscle around it.

The lecture Small and Large Arteries by Geoffrey Meyer, PhD is from the course Cardiovascular Histology.

Which of the following layers is thinner in vein as compared to artery?

Which of the following layers in vein is dominated by collagen?

The endothelium is composed of what type of cells?