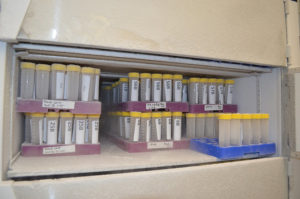 Human Genetics & Inheritance
Chromosomes are the cellular carriers of genes and are the functional unit of heredity. First described by Mendel in 1865, each gene can exist in an array of different forms called alleles. Hereditary traits are passed to offspring through alleles each given by the parents. The distribution of homologous chromosomes during meiosis, of which one of each pair is randomly chosen, is conveyed to each haploid cell. Genes are passed to the offspring, and each time that the genome is replicated, transcribed, and translated, proteins that reflect the combination of hereditary traits is reflected in the phenotype.
read more
Load more
Share
Ask Questions
Take Notes
Download Slides
Report Mistake
Comments
show all Show less
My Notes
show all Show less
Learning Material 2
show all Show less
Report mistake
Transcript
0 of 0

00:02 Sex determination in humans, you are probably all fairly familiar with the female has a possibility of contributing X and X and the male could contribute and X or a Y. And the Y chromosome is a little bit special. First of all, it is tiny, but it also has a gene on it that is involved in sex determination. It is called the SRY region of the Y chromosomes. 00:28 It is the sex-determining region of the Y chromosome. And if that gene is present and expressed, then we will see maleness, but if that gene is not present maybe there is no Y chromosome or maybe the gene is broken, then by default we will see the female phenotype in human condition. We know how this works out. We have an X and a Y. We can have male progeny or X is in excess, we have female progeny. Fifty percent chance of boys or girls based on this sex determining system.

The lecture Sex Chromosomes – Chromosome Theory and Sex Linkage by Georgina Cornwall, PhD is from the course Understanding Genetics.

Which of the following is NOT true regarding human sex chromosomes and inheritance/development of gender?