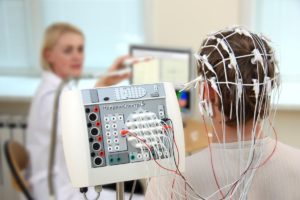 Types of Seizures and Epilepsy during Pregnancy
Seizures are the result of abnormal electrical activity in the brain, which can be either stimulatory or inhibitory. The abnormal activity consists of repeated consistent discharges that can lead to motor, sensory, autonomic or behavioral dysfunction.
read more
Load more
Share
Ask Questions
Take Notes
Download Slides
Report Mistake
Comments
show all Show less
My Notes
show all Show less
Learning Material 2
show all Show less
Report mistake
Transcript
0 of 0

00:01 Let’s talk about seizures. 00:04 So what is a seizure? An abnormal hypersynchronous – Stop there for one second. 00:10 What the term hypersynchrony means in seizures is that you have an abnormal epileptogenic network, which you can study by ECoG not EEG, that shows increased synchronous in certain points of time. Usually, before a seizure, there will be a transient moment of desynchrony between the epileptogenic network and the surrounding brain tissue. Then, synchrony will evolve over time, and you end up with hypersynchrony only later in the seizure. You can see these changes only on an ECoG and you are unlikely to see them on an EEG. Moreover, the topic of hypersynchrony means coherence is increased between two points in the brain, however, the correlation between these two points might be lost. Important for you is that seizures are due to hypersynchronous neuronal activity. 01:02 And what’s the difference between a seizure and epilepsy? We’ll get into that in a second. 01:06 But right now, let’s talk about the definition. 01:10 So once again, an abnormal hypersynchronous electrical discharge of neurons in the brain. 01:16 It’s easy to read, but please understand the significance of it. 01:23 So what’s an epilepsy? The tendency to experience recurrent, unprovoked seizures. 01:26 The operative word, unprovoked seizures. 01:31 Keep things simple. 01:32 A seizure is a hypersynchronous type of electrical activity over a period of time, maybe minutes, whereas epilepsy would be unprovoked type of seizure by the definition. 01:42 Once you get the definitions down, obviously, we’re going to get into further details. 01:46 Generalized seizures originate at some point within, and rapidly engage “bilateral” neuronal networks. These bilateral networks can include cortical and subcortical structures, but in no way mean it includes the whole brain. The keyword here is “bilateral” in origin. Because the seizures originate from a bilateral network, the symptoms can be different from one seizure to another. 02:11 and you can have primary generalization. 02:14 You can have secondary but at this point, current day practice, we don’t really talk about this so much, huh? But our focus will be on primary generalization with secondary. 02:24 But what we’ll do is, we’ll get into focal, meaning to say, you have focal portions of the brain, most commonly, the medial temporal lobe. 02:32 Then at some point, a focal then can go on to secondary generalization. 02:38 Focal seizures originate within a network limited to one hemisphere. Keyword here is “one hemisphere”. Secondary generalization means that at a later stage in the seizure, there is involvement of both hemispheres. “Bilateral”.

The lecture Seizures: Introduction by Carlo Raj, MD is from the course Seizures.

Which of the following is defined as a recurrent unprovoked hypersynchronous electrical discharge of the brain?

This taught me... I was wondering one day while I was reading a Medical book, hmm what are seizures? Then I was looking all over the web found this website and went to Carlo Raj, MD for seizures this is just the beginning for me and I hope I like the rest of his videos.

This taught me... I was wondering one day while I was reading a Medical book, hmm what are seizures? Then I was looking all over the web found this website and went to Carlo Raj, MD for seizures this is just the beginning for me and I hope I like the rest of his videos.